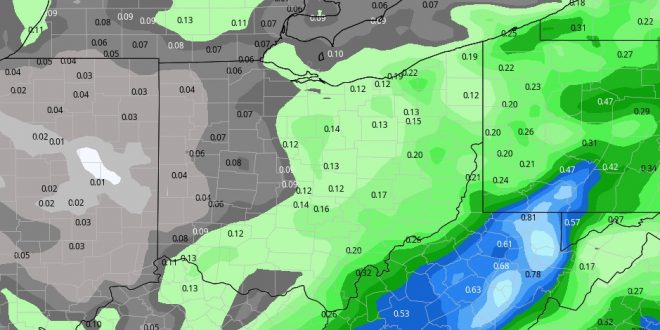 After a very active finish to 2020 and start to 2021, we are shifting back to a calmer, drier pattern over the next 10 days. Right now we have 2 very minor threats of moisture over the region in that period, and those are hardly worth mentioning. Overall, our temperature pattern will be near normal, not exceptionally mild but definitely not overly cold, and precipitation for this 10 day period will trend drier than normal, unless a system for early next week tracks farther north, which at the moment seems like it may be something to keep an eye on. The map below shows total precipitation potential (liquid equivalent) over the next 10 days. Anything that falls in this period will be in the form of snow.

Today we see a lot of clouds holding over Ohio. Temps remain warmer in higher levels of the atmosphere and those warm temps are coming over a very cold, and in come cases snow-covered surface. That is a recipe for cloud formation. We can even see some fog in some spots today. Clouds remain mostly intact tonight. Tomorrow a weak front slides through the state. That front brings colder air with it, but also the potential for some minor precipitation. We wont rule out light snow or flurries tomorrow, especially over the western half of the state. Accumulations will be minor to none, and we expect coverage to be limited to 50% at best.

We move into a fully dry pattern with better sunshine potential from Wednesday right on through next Monday. Temps will be near normal, which of course is cold in January, but we see no major cold air outbreak in this period. WE should see sun and fair weather clouds through the period, and as good of evaporation of moisture that has fallen recently as one could expect for January.

Our next potential system arrives late next Monday night and goes through Tuesday. The low for this system right now looks to be tracking well to our south, but we have a bias toward a more northerly move. We will keep an eye out for scattered light snow showers moving into Ohio, especially on Tuesday, but will put coverage right now at only 40%, skewing that south. Track of the low will be very important. Right now this system does not look to have a lot of moisture to work with either, but would be able to tap into moisture off the gulf, so that is another reason we are watching it.

Behind the front, we swing back drier for next Wednesday and Thursday, with partly sunny skies and temps remaining close to normal.