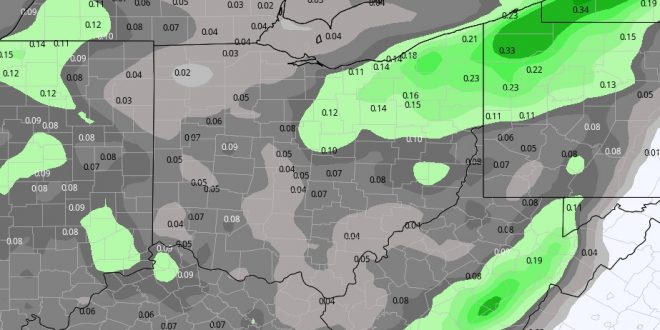 Dry weather remains the biggest part of our forecast over the next 10 days. Admittedly, clouds have been tougher to break up than we would have liked, but as high pressure builds in over the state today into the weekend, we should see better sun emergence in the days ahead. However, do not be fooled: the sun is not automatically going to bring warmer temps! High pressure brings cooler, sinking air this time of year at its core, and as such, we look to remain chilly through the next 3-4 days at least, even with sun. That being said, even a little sun will make it feel much nicer, and will contribute to further drying and evaporation.

Good sunshine starts the week too next week, with a few more clouds around on Tuesday. Wednesday and Thursday sees temps moderate, with above normal high temps likely on Thursday. Our next front arrives later Friday midday/afternoon.

The late week system next week continues to look pretty weak in terms of over all precipitation potential. In fact, the moisture Friday afternoon through early Saturday morning may have a liquid equivalent of only a few hundredths to a tenth in most areas. Sprinkles or flurries. That assessment is a little different in the far NW part of the state, where lake enhancement is possible/likely this time of year…but even there, there is not a lot of moisture to work with. The map below gives an update to current potential. We’re really not that impressed. However, we will continue to watch this system to see if it wants to develop further, but right now it does not look to be a big deal. That being said, it will usher in some colder air to finish the 10 day period next weekend for the 16th and 17th.

There has been a lot of talk from other forecast outlets about the “polar vortex” being unleashed the week after next and things getting horribly cold here to finish January. We say “slow your roll” this morning to that kind of talk. Cold air is pooling in the central plains, but a massive arctic out break is 1) quite the over reaction as this time and 2) only showing potential of anything close to that on 1 model (which happens to not be worth a darn in the winter months generally anyway). So, we remain on alert, and likely will see some colder air than our start to January up to this point. After all, the month has not been that cold, really, near normal. But to call for this arctic deep freeze at this point is quite over zealous. We’ll stay much more conservative for now. Have a great weekend.