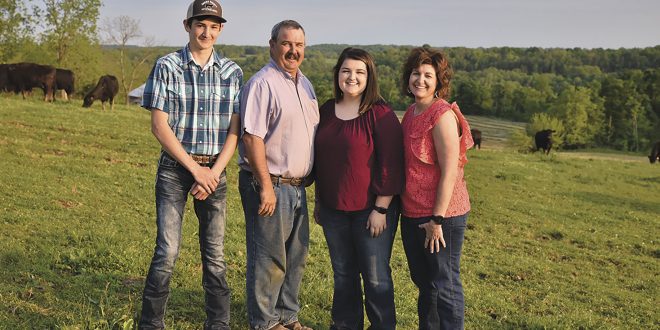 The Seedstock Producer of the Year was Raines Farms in Adams County.

Although Ohio’s cattle industry was unable to celebrate in person at the Ohio Cattlemen’s Association’s (OCA) Annual Meeting and Awards Banquet, the 2021 award winners, scholarship recipients and Top Hand recruiters are still being celebrated for their achievements.

Each year OCA awards seven distinguished individuals and organizations for their achievements and leadership within Ohio’s cattle industry. Those awards and their respective recipients are as follows

The Commercial Cattleman of the Year Award is presented to Ohio farms who have demonstrated success through their commercial cattle operations. These farms utilize performance information and the latest technologies available to increase the predictability of the cattle they raise, in addition to maintaining a continued focus on meeting and exceeding the expectations of beef consumers.
Bob Shugert operates Shugert farms alongside his brother Dwight Shugert and partners Steve and Stephanie Harris. Over the years the farm has grown and today spreads over two states and several counties where they run 2,500 head of cattle.

This award was sponsored by the Ohio Angus Association.

The Industry Excellence Award is presented to beef producers who have worked over a period of years for the betterment of Ohio’s beef industry. Recipients are those that have contributed as a volunteer/leader to the success of OCA and/or through their individual cattle operations have been trailblazers for the beef industry creating new paths for other beef producers to follow.

Rowe began Rowe Nutrition in 1979 and has expanded into many different avenues over his 42 years of business. Although he started out in the swine industry, a lot of his business now comes from feedlots and show cattle. The business now sells feed to 29 states and delivers to 12.

This award was sponsored by Ohio Mid-Eastern Maine-Anjou Association

The Industry Service Award is presented to those who have contributed to the betterment of Ohio’s beef industry through their careers. Recipients may or may not also be beef producers. The award is presented for efforts made outside, but complementary to beef production. Recipients of the award are selected based on actions they have taken through their career in academia, Extension, government, agri-business, etc.

Denny Ruff is the general manager of the Muskingum Livestock Auction Company in Zanesville where he has been involved since 1987. Ruff and his team have worked closely with OCA to host the annual Replacement Female Sale for the past eight years.

This award was sponsored by the Livestock Marketing Association and Union Stockyards Co.

Young Cattleman of the Year — Lindsey and Adam Hall, Hillsboro

The Young Cattleman Award is presented to individuals or couples, typically under 40 years of age, who have demonstrated the initial stages of a successful beef operation and exhibited leadership potential. The recipient is also OCA’s automatic nominee to participate in the National Cattlemen’s Beef Association’s (NCBA) Young Cattlemen’s Conference.

Lindsey and Adam Hall raise cattle on Lindsey’s family farm in Hillsboro where they have a 350 head cow-calf operation of Angus, Simmental and SimAngus crosses. The operation has recently expanded with the success of Maplecrest Meats – an online store created to direct market their beef.

This award was sponsored by ST Genetics.

The Environmental Stewardship Award is presented to Ohio farms who have demonstrated a strong commitment to being good stewards of their land, water and air resources, livestock and operate their farms in a sustainable manner. Recipients implement best practices to control water run-off, reduce damage in high-traffic feeding/watering areas, exercise good pasture management, preserve woodlands and provide for wildlife. They often partner with government entities to implement conservation measures.

Dr. Thomas B. and Susie Turner are the owners and labor force behind their 60-head Shorthorn cattle operation. The couple raise their cattle on a 215-acre reclaimed silica mine where they work diligently to find solutions for the challenges they face with erosion.

This award was sponsored by the Ohio Shorthorn Breeders Association.

The Seedstock Producer Award is presented to Ohio farms who have demonstrated breeding success through their registered cattle operations. These farms utilize performance information and the latest technologies available to increase the predictability of the cattle they raise as breeding stock for others, in addition to maintaining a continued focus on meeting and exceeding the expectations of beef consumers.

Raines Farms is a diversified operation that has been passed down through multiple generations. Todd Raines runs the operation alongside his father, brother and both of their families. The operation includes 5 acres of greenhouses, 1,500 acres of corn and soybeans, 75 acres of burley tobacco and 300-350 Angus cows marketed as seedstock, freezer beef and finished cattle.

This award was sponsored by Adams County Cattlemen’s Association.

The Outstanding County award is OCA’s opportunity to recognize the outstanding achievement, industry education and consumer promotion efforts of counties from across the state. Activities, participation in OCA events, communication efforts, support of industry youth and a cohesive partnership are all areas of focus for award recognition.

The Fairfield County Cattlemen’s Association prioritizes their youth development programs and fundraisers. Each year, they award multiple scholarships, sponsor a pee wee showmanship class and host a carcass contest. A recipient of one of their scholarships, Desirae Logsdon, went on to become the National Shorthorn Lassie Queen. The group is well-known in the community for their educational and beef promotional efforts, including the annual chili cook off.

This award was sponsored by Ohio Corn & Wheat.

To learn more about each award winner and view their award videos, go to ohiocattle.org.

Along with the seven OCA award winners, the Ohio Cattlemen’s Foundation (OCF) awarded 22 scholarships to students who are enrolled in an agricultural program or a graduating high school senior who plans to study agriculture at a college or university.

This scholarship is made possible by the sale of Ohio’s beef specialty license plates. Four $1,000 scholarships were awarded to:

This scholarship is made possible by proceeds from the beef putt-putt golf course at the Ohio State Fair. Four $1,000 scholarships were awarded to:

This scholarship is made possible by the annual Cattlemen’s Gala Celebration and Fundraiser. Twelve $1,000 scholarships were awarded to:

Saltwell Expo Scholarship
This scholarship was made possible by Saltwell Western Store, owned by Jay and Sally Puzacke, who donate a percentage of sales generated from the official line of clothing sold through Saltwell’s trade show booth at the Ohio Beef Expo. One $1,000 scholarship was awarded to Dawson Osborn, Lynchburg.

Lastly, each year the OCA Membership Committee offers rewards for those who are excelling in recruiting new members. When recruiters reach 5 new OCA members, they will become an OCA Top Hand. OCA Top Hand members receive prizes for their recruitment efforts.

OCA will also celebrate the award winners and scholarship recipients via social media. The association’s annual business meeting has been postponed until further notice.