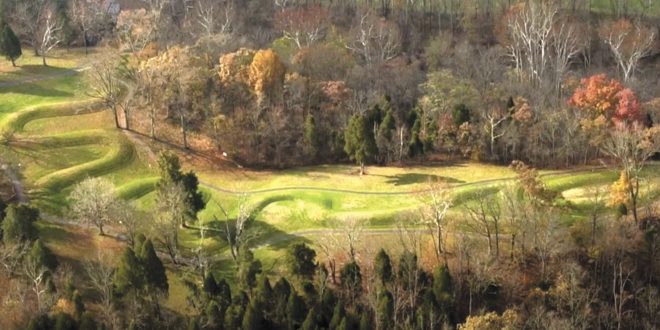 The Serpent Mound in Adams County is certainly among the most famous earthworks in the country. Photo by ODNR.

Scattered across southern Ohio are many American Indian archaeological sites of great significance. Taking the form of earthworks, mounds, and effigies, these sites bear witness to the last physical remnants of the Hopewell people, whose culture emerged and thrived in Ohio and other parts of eastern North America from 200 BC to 500 AD, at the beginning of what is called the Middle Woodland period. The moniker Hopewell does not refer to a specific tribe, but rather a culture that is linked through shared artifacts (often found at and in their earthworks) and a shared way of life that developed across the Midwest at the same time.

Ohio is home to some of the largest and most impressive Hopewell sites in the world, as the Archaeological Institute of America explains.

“The most spectacular earthworks are in southern Ohio and Indiana, especially in the valleys of the Great and Little Miami, Scioto, and Muskingum rivers. The Newark Earthworks is the largest set of geometric earthworks built by the Hopewell culture. The Fort Ancient earthworks is the largest example of a hilltop enclosure. The largest set of Hopewell burial mounds is at the Mound City Group in Chillicothe. All three of these sites are National Historic Landmarks and are being considered for nomination as World Heritage sites,” the group said.

The Hopewell are a people with no written language or history, and much about their 2,000-year-old culture and the mounds that they built remain cloaked in mystery. Study and discussion of this people and their earthworks continues among archaeologists and historians today, as many questions remain to be definitively solved: What did the Hopewell people call themselves? Were they sedentary farmers or hunter/gatherers? How and where did they live? From where did they come? What was the purpose of the mounds these people built?

Much of what we know about the Hopewell comes from the study and excavation of the more than 70 mounds and earthworks that lie spread out across the state. These earthworks can be conical, round, elliptical, loaf-shaped, and sometimes animal-shaped. Varying in size and height, these mounds were built by piling dirt into baskets and carrying them atop the earthwork in progress. In terms of function, archaeologists believe earthworks to be places of ceremony, not settlements. The Newark Earthworks complex, for example, is considered to be at once part temple, part astronomical observatory, and part burial ground.

According to archaeologist Alice P. Wright, these mound sites were social, economic, burial, and ceremonial centers that brought scattered Hopewellian homesteads/hamlets together.

“In their daily lives, they were dispersed across a wide landscape. Under these conditions, occasional activities at major earthwork sites — mound building, feasting, gift-giving, finding spouses, visiting with relatives, burying the dead, etc. — would have assembled far-flung individuals to renew their social relationships as they conducted rituals to renew the world in a cosmological sense,” Wright said.

It appears that the Hopewell society consisted of large numbers of small autonomous groups spread throughout a region and linked together in part by local mounds and earthworks. The Hopewell people are a culture at the cusp of two distinct modes of existence, transitioning from a nomadic hunter/gatherer model to a more sedentary agricultural one. Archaeologists have deemed them “hunter-gatherer-gardeners” or “forager-farmer-fishers,” as both cultivated crops and wild plant resources were part of their diet.

“Hopewell forager-farmers appear to have lived in small homesteads, in groups of one to a few households…the residents of multiple individual homesteads formed a ‘residential community’ responsible for the construction and maintenance of a nearby earthwork,” Wright said.

In his article “Hopewell Archaeology,” Elliot M. Abrams concurs, describing the Hopewell as a society living in a “dispersed agricultural hamlet model” where small local communities (two to four families) “were spatially associated with mounds and larger earthwork complexes…the pattern in the Licking Valley shows small communities affiliated first with local and smaller earthworks and then with the much larger Newark Earthwork Complex.”

The Hopewell were part of an intricate and far-reaching trading web that stretched across much of what is now the eastern United States. The Archaeological Institute of America points out that “The Hopewell culture participated in long-distance trading networks, acquiring copper from the upper Great Lakes, mica from the Carolinas, shells from the Gulf of Mexico, and obsidian from the Rocky Mountains.”

A tour of Ohio’s Hopewell sites stimulates the imagination, fuels intellectual curiosity, and helps us to appreciate our region’s distant history. For instance, evidence of the Hopewell’s wide-ranging trade system has been found in the artifacts recovered from ceremonial mounds and burial sites and can be seen first hand at “The Great Indian Quarry of Ohio” at Flint Ridge State Memorial (15300 Flint Ridge Rd., Glenford). During the Middle Woodland period, Native Americans began to quarry flint on an industrial scale and literally hundreds of quarry pits and workshop sites can be found scattered across more than 2,000 acres in Licking and Muskingum counties. Flint Ridge was a gathering place for local and distant Indian tribes to collect flint for trade, tools, and weaponry and to meet with distant friends and relatives. Visitors to this ancient quarry site will find a couple of miles of non strenuous hiking trails winding through the woods, taking them past numerous quarries perched atop the ridge.

Flint Ridge is just 11 miles from The Newark Earthworks Complex (455 Hebron Rd., Heath). This site preserves three sections of earthworks: The Great Circle Earthworks, The Octagon Earthworks, and the Wright Earthworks. The largest known geometric earthen enclosure in the world, The Newark Earthworks were multifunctional Hopewell structures that served as part religious center, part burial ground, and like many earthworks that were aligned with the movements of the stars and sun, part astronomical observatory. The site, which may have been one of the most important, central locations in the Hopewell world, is open to the public, although its museum is currently closed due to COVID.

Seventy five miles south of the Newark Earthworks lies Hopewell Culture National Historic Park (16062 SR 104, Chillicothe). This national park showcases several large geometric earthworks and burial mounds at several sites around the Chillicothe area. The Mound City Group, the largest and most impressive preserved site in the area, has a Visitor Center (currently closed due to COVID) featuring educational displays and Hopewell artifacts. Travelers heading from Newark Earthworks to the Chillicothe sites should note that their travel corridor may closely mirror one that was laid down by the Hopewell thousands of years ago. Recently, there has been conjecture that at the height of Hopewell culture, there was an Indian road that connected the Newark site to the Chillicothe site. Ohio Historical Society archaeologist Bradley Lepper, based on his study of aerial photography and maps of the region, has found trace evidence of parallel earthen banks or walls marking what was a ceremonial roadway between the two locations that he has named the “Great Hopewell Road.”

Heading another 40 miles further southwest into the hills of Adams County, tourers will encounter what is perhaps Ohio’s most intriguing and famous earthwork, the Serpent Mound (3850 SR 73, Peebles). Originally built by the Adena people, the culture that preceded and overlapped with the Hopewell, the Serpent Mound is a 1,348-foot long effigy mound in the form of a serpent with a curved tail and what appears to be an open mouth. It is the largest surviving effigy mound in the world.

There are more questions than there are answers about the Serpent Mound, and visitors viewing this spectacular earthwork are left to ponder the many mysteries surrounding it. What was the serpent’s function? Does it have a spiritual purpose? Many of the snake’s coils align with different sun and moon phase — is it a primitive calendar that marks different times and seasons? Is it a compass? The serpent’s mouth has also been the subject of much debate: is it a depiction of the open mouth of a striking snake? Or is the snake swallowing an egg or the earth? Or is this effigy a representation of the Great Horned Serpent of Middle Woodland mythology, and the “egg” is actually his medicine bundle hanging from his horns?

Other notable earthworks open to the public include Fort Hill Earthworks and Nature Preserve (13614 Fort Hill Rd., Hillsboro), which features a stone and earthen hilltop enclosure and smaller circle earthwork made by the Hopewell people. There is excellent, rugged hiking available within this 1,300 acre preserve of mature old growth forest. With 1.5 miles (18,000 feet) of walls in a 100-acre complex, Fort Ancient State Memorial (6123 OH 35, Oregonia) is the largest prehistoric hilltop enclosure in the U.S. Sitting on a ridge overlooking the Little Miami River, Fort Ancient also provides visitors with scenic views and a couple miles of hiking trails. And in the southeast of the state are remnants of the Marietta Earthworks, located near the confluence of the Muskingum and Ohio Rivers in Washington County. There are three segments of earthworks still accessible around Marietta: the Washington County Public Library sits atop one pyramidal mound, another mound is located in Quandranaou Park, and the Conus mound can be found in Mound Cemetery.

While countless earthworks have been obliterated by man and nature over the centuries, many of Ohio’s prehistoric Indian earthworks have survived the test of time and the onslaught of modern development. The remaining Hopewell mounds serve as a mysterious and provocative reminder of the labors and dreams of an ambitious past civilization.