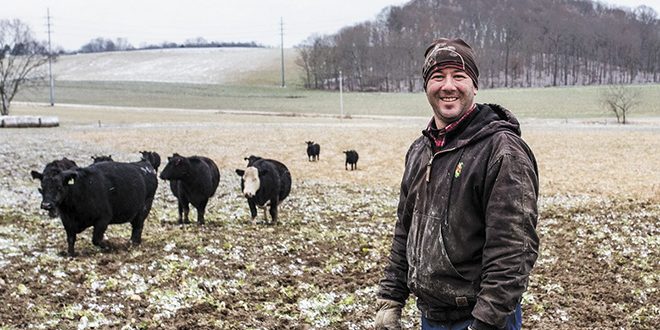 Jason Poorman has been taking steps to address the challenges of winter mud on his cow-calf operation. Photo by Gracee Poorman.

While it is nice to envision Ohio’s rural winters with snow-covered fields and rolling hills gleaming white under the sun, the unfortunate reality for many livestock producers is much less glamorous. Unfortunately, winter typically means mud, and plenty of it.

“It has been an easy year so far, but we don’t usually seem to get much frozen ground. We get 34 degrees and pouring down rain and, if your cows are not on a feeding pad or hard packed surface, you’re losing money. In those conditions, you can’t keep them dry and keep them from losing energy through the mud to maintain a cow, let alone a pregnancy that is inside of her,” said Jason Poorman, a Perry County cattle producer. “If it was 20 degrees and sunny every day, we would be able to go through winter no problem. Cold and rainy is miserable on livestock and expensive for feed and bedding. There is so much waste and loss.”

In the last couple of decades, Ohio has seen increasing frequency of large precipitation events, including during the winter and spring months. Climate experts believe the trend will likely continue, meaning a future of more muddy winters ahead. Poorman has a cow-calf operation with his family with around 130 cows, replacement heifers and a feedlot to fatten up the calves. The Poormans have taken a number of measures to address the challenges of winter mud.

“We have a heavy use pad and we are building another one right now. We have a 75-foot by 275-foot pad we built out of asphalt grindings topped with stone. That is clear on top of the hill,” Poorman said. “Now we are building 60-foot by 80-foot pad right beside our cow barn with hog slats we were able to get. We want to put a water tank right on the pad and we can move the rings down closer to the barn and water. Then we can fence it off and maintain things on those tough days.”

Even with the pads, winter hay waste can still be a significant problem.

“When it is raining and you’re feeding hay it is a problem. Everybody wants to go to a tub grinder to mix the good hay and not-so-good hay and now that corn is over $5 it may not be feasible to raise a profitable calf,” Poorman said. “The other problem is that you have to buy all of the equipment to feed a cow with $1.07 fat cattle. It is really kind of tough. I don’t know that feeding from hay racks, though, is the right thing either.”

This year, Poorman is trying to better manage winter feed costs and mud issues with a cover crop feed blend.

“We have 77 cows out now on a cover crop until I have to quit grazing the end of February when we start calving. We have turnips, wheat, corn, beans, oats, and millet in the cover crop mix. The cover crop was planted on prevent plant corn ground. We had planted oats in the spring. We harvested them, baled the straw, used some of the oats to grind into feed, and saved some of the seed to mix it in and reseed it with the cover crop mix. I planted the cover crop in late July or early August — maybe I should have waited until September. I may have planted it too early because it is already brown,” Poorman said. “The corn is just a nubbin, but they know how to go in there and pull it up. They eat the tops of the turnip off and you can see it is white where they bit it in half like an apple. That ground also kind of has a base to it with the crop of oats on it too and that helps with the mud.”

If winter mud is not managed, it can be very costly to cow-calf producers. A recent article by Kirsten Nickles, Alejandro Relling and Anthony Parker with the Ohio State University Animal Science Department took a look at the costs associated with winter mud. The following is an excerpt from the article.

In spring calving beef cow herds, females are typically in the last third of gestation from January to March. The last trimester of gestation is when most fetal growth occurs, with an Angus type fetus growing approximately 0.9 pounds per day towards the end of the third trimester. The rapid growth of the fetus at this time requires the cow to meet the fetal nutrient requirements by increasing her nutrient intake and/or mobilizing her body tissues.

When beef cows are exposed to wind, rain, and mud the nutrient requirements to maintain body weight and grow a fetus increase in part because the insulative properties of the hair coat are compromised, and the cow must increase her rate of metabolic heat production to maintain her internal body temperature. It has also been proposed that cattle expend more energy when walking through mud compared to the energy they require to walk on dry ground, but there is limited supporting data for this assumption in cold environments. Cows exposed to muddy conditions change their behavior by spending a greater amount of time standing and less time lying in mud compared to cows given access to bark chip bedding and this alone requires greater energy expenditure by the cow.

In the winter of 2019, Kirsten Nickles, a PhD candidate, conducted research at The Ohio State University to determine the energy cost of a muddy environment to beef cows throughout late gestation. Cows with similar body weight were paired and allocated to either a mud pen with an average depth of 9.3 ± 2.3 inches, or a bark chip bedded pen of a similar depth. Treatments were applied to the cows from day 213 to day 269 of gestation. Although each pair of cows were fed the same amount of feed, the cows in the mud pens weighed 83 pounds less than cows in the bark chip pens and lost one body condition score by the end of the study on day 269 of gestation. Calf birth weight was not affected by the mud treatment; however, cows subjected to mud pens decreased their conceptus free body weight indicating that the cows mobilized body tissues for fetal growth. Cows in the bark chip bedding group maintained their conceptus free body weight throughout the treatment period. Nickles and her colleagues estimated the cows in the mud treatment would have needed an extra 1.8 Mcal Net Energy per day to maintain their conceptus free body weight.

The typical quality of hay fed to gestating cows in Ohio limits the cow’s dry matter intake because of the concentration of neutral detergent fiber (NDF) present in the hay. Beef cows can generally eat approximately 1.2% of their body weight in NDF; but when dealing with poor quality forages, cows cannot consume enough forage to meet the requirements for maintenance and gestation. If environmental conditions such as mud increase energy requirements further than the net energy required for maintenance and gestation, then the cow must mobilize her body tissues to meet her energy demands. In mobilizing her body tissues to meet her energy requirements, the cow will lose body weight, and this can create other long-term problems. Cows with reduced body weight and body condition scores will have decreased colostrum quality, longer postpartum intervals, increased days to conception, and decreased pregnancy rates. In addition, research has shown that cows with a body condition score of 4.5 or greater at calving and cows that were gaining body condition after calving had greater pregnancy rates than cows that had body condition scores of 4 or less or that had lost body condition after calving. These results indicate that nutrient restriction prepartum should be avoided unless cows are heavily supplemented after calving.

The effects of mud on nutrient requirements are not known for first calf heifers. We are currently conducting research in the winter of 2020 and spring of 2021 to determine the effects that mud has on first calf heifer nutrient requirements and reproduction after calving. As previously mentioned, cows housed for the last trimester of gestation in muddy conditions had an estimated increase in energy requirements of 1.8 Mcal Net Energy/day, which is equivalent to approximately 20% of the daily energy requirements for maintenance of a 1,200-pound cow. While this restriction did not affect calf birth weight from mature cows, it is likely that if cows are not supplemented heavily after calving there will be an increased postpartum intervals and decreased pregnancy rates that can negatively impact the financial stability of the cow-calf operation. 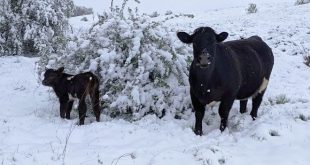 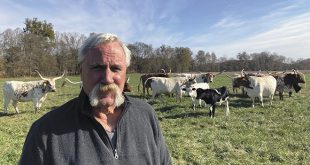