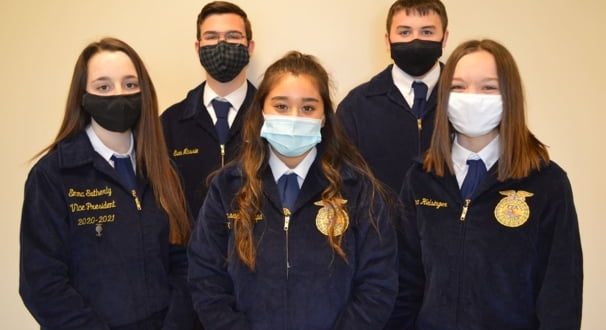 FFA members competing in the FFA Creed Speaking Event memorized and recited the FFA Creed and answered questions on their interpretation of the FFA Creed. This contest is open to first year members only. Representing Miami East-MVCTC were Fletcher Harris and Alaina Helsinger. Helsinger placed third in the county. Harris placed second and advanced to the district competition where he placed fifth.

Sumsaar Thapa competed in the Beginning Prepared Speaking Event. She researched, wrote, presented and answered questions on a five to seven-minute speech. Thapa’s speech shared the infrastructure of Nepal. She placed second in the county contest and seventh in the district.

The Extemporaneous Speaking Event members are given an agriculture topic then have 30 minutes to prepare a four to six-minute speech and follow-up answer questions. Representing Miami East-MVCTC was Evan Massie. He placed third in the county competition.

Emma Sutherly competed in the Advanced Prepared Speaking Event. She spoke for six to eight minutes on a goat industry speech that she researched, wrote, presented, and answered questions over. She placed first in the county and seventh in the district.

Using enterprise budgets to help determine which crop to grow