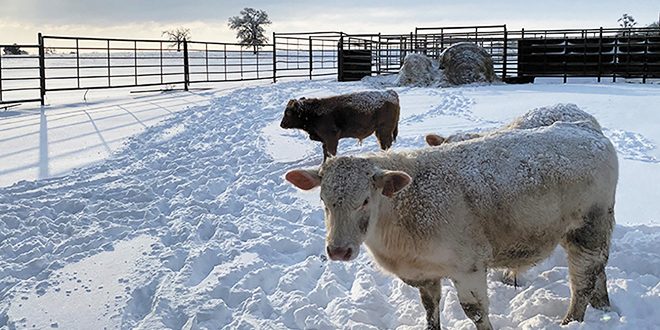 Snow in Texas this month created a wide array of challenges for agriculture. Photo by Julie Tomascik, Texas Farm Bureau.

By Matt Reese and Kolt Buchenroth

On Wednesday, Feb. 10, 2021 a cold front moved into southeastern Texas followed by some precipitation, which turned to ice. This set the stage for a series of winter weather events not seen in Texas in recent memory and likely the first global billion dollar disaster of 2021.

“As expected, the strong Arctic cold front passed through Southeast Texas on Sunday (Valentine’s Day). It served as the turning point from a significant winter storm that preceded the front to the historic winter event that would eventually unfold,” according to the National Weather Service. “On Sunday, every square inch of Texas was in a Winter Storm Warning. Snow, sleet, and freezing rain began to encroach into Southeast Texas Sunday afternoon, and then increased in coverage and intensity overnight Sunday night into Monday. Thunder snow was reported near the town of Snook, Burleson County Sunday evening, and then thunder sleet occurred near the Brazoria and Galveston counties coastline Sunday night. Roads began to become impassable through the region Sunday evening due to ice and snow and some would not become safe until Friday. Temperatures crashed down Sunday night behind the cold front with much of the area getting down into the teens or single digits with wind chills down into the single digits or even below zero.”

This was followed by an extended stretch of frigid temperatures accompanied by more ice and snow.

“There was a total of 8 days, 23 hours, and 23 minutes of winter highlights between the first Winter Weather Advisory issued on Thursday, Feb. 11 at 9:37 a.m. to when the last Hard Freeze Warning expired at 9 a.m. on Saturday, Feb. 20,” the National Weather Service said.

This left Texas residents, industries and agriculture in a very challenging situation.

“We’re not dealing with any weather that you probably don’t have on a regular basis up there in Ohio, but down here in Texas we got some weather we are just not that used to having and we were not prepared for it,” said Carey Martin, with the Texas Farm Bureau Radio Network. “The old timers tell me the last time we had anything close to this was back in 1989 and 1983. So we are talking about going a ways back before you can say we had weather anything resembling what we had.”

A big part of the problem was a collapse of the energy grid.

“Our power grid failed and there is a lot of finger pointing going on right now,” Martin said. “There are some facts that you can point at. One is that we are actually a big renewable energy state. We have a lot of windmills here in Texas because the wind blows a lot. We also have a lot of solar farms — 25% to 30% of our power comes from wind and solar. That is a great thing, until the windmills freeze up and they can’t turn and the solar panels are covered with snow and ice. All of the sudden, overnight you lose 25% of your power supply. That is going to cause a problem.

“We also had a huge natural gas problem. We are the largest natural gas producing state in the country, but we couldn’t get natural gas down the pipes to our consumers to heat their homes or to processing plants to keep milk processing and meat packing going. This is a multi-pronged issue and there is a lot of activity going on in state government to try to get to the bottom of this and try to keep it from happening again.”

Compounding the energy problems were ice and snow covering roads and buildings. Structures around the state — including some poultry facilities — collapsed under the weight of the snow and ice.

“And, for transportation, we simply couldn’t get trucks over the road. It was just too frozen up and iced over,” he said. “Our structures aren’t built to withstand that because we do not deal with it very often. We weren’t prepared for it. Pipes are not insulated adequately, pumps froze up and there are many busted pipes and plumbing issues. We did have some time to prepare, but there were a lot of people who looked at that forecast and thought they were pulling our leg. It just doesn’t get that cold in Texas. This has gotten everyone’s attention. We had folks freezing in their houses. You couldn’t leave because the roads were so bad and you had no source of heat with no power.”

The situation put the food chain in a similar situation to backups seen around the country in spring of 2020.

“Agriculture suffered like it would in any major natural disaster. If you look at the farm level, we do not have estimates on what the losses were, but I can tell you that millions of dollars of milk were dumped down the drain because there was nowhere for it to go. We had blackouts in a lot of places. We are home to big processing plants. The big three packers are all here in Texas. There were shutdowns because of power outages,” Martin said. “We saw empty grocery store shelves all over Texas again just like a year ago with COVID-19. Our consumers have now seen empty grocery store shelves twice within the span of a year. If you’re looking for a silver lining from an agricultural standpoint, at least maybe this got some consumer’s attention about how important agriculture is to their daily lives.”

Fortunately, Texas was able to restore power to nearly everyone by Feb. 24 and warmer temperatures thawed the rare Texas freeze. There have been some lessons learned, however.

“We are very independently minded here in Texas. As the nation knows, we like to think we can stand on our own without anybody else’s help. That wasn’t the case this time and we got a real reality check,” Martin said. “This is something we will remember for a long time.”

Those interested in helping out Texas agriculture can visit Texasfarmbureau.org. 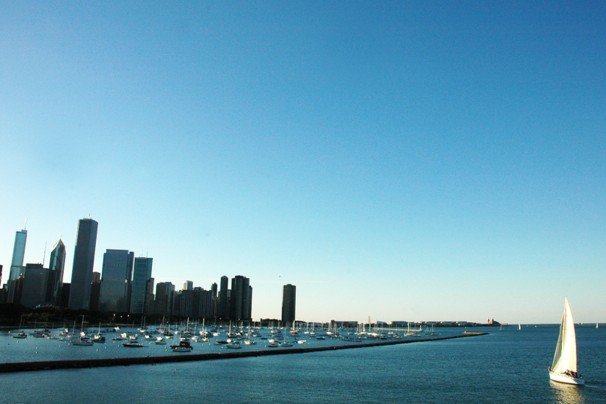 The U.S. Department of Agriculture (USDA) encourages urban producers and others to attend the second …