Investing below the surface

Just because a farmer has raised cover crops for a few years, it does not mean they have all the answers. Sometimes the experience leads to more questions. The more experience they gain, the more questions they have, but also the more new things they will try.

Dr. Hans Kok, Program Director of the Conservation Technology Information Center in Indiana, and Eric Neimeyer, a farmer from Delaware County, led a discussion tackling the FAQ’s about cover crop management during a “Dirt on Soil Health” program this winter.

What about using wheat or cereal rye as a cover crop? What herbicides should be avoided? What does it cost to grow cover crops? Do cover crops make any money? Are there any value-added cover crops?

“The first question a farmer needs to answer for themselves is why they want to plant a cover crop,” said Kok. “We are only using our farms for about 5 months out of 12 months in the year for corn and soybeans production, which leaves 7 months of unused solar energy. With cover crops we can extend that to around 10 months to capture solar energy and store nutrients.”

There are a number of resources available to aid in cover crop selection. “Talking to staff at the Soil and Water Conservation Office, or OSU Extension about what works best in your area is a great place to start,” said Kok. “The Midwest Cover Crops Council (MCCC) offers a Cover Crops Decision Tool (online computer program) that is excellent to help answer a lot of the basic questions in selecting the right cover crop for a farm.”

Planting date is a key factor to establishing a successful cover crop. “If a farmer can incorporate wheat in the rotation, that opens a larger window for planting a greater selection of cover crops,” said Kok. “The middle of September is a basic cut-off date that I use for planting most cover crops, other than cereal rye. The rye can be planted later in the fall and still have success.”

Finding alternatives to seed cover crops into a standing grain crop also provides a greater window of opportunity for establishment. “Aerial seeding requires rain after the application for it to work,” said Kok. “Large seed cover crops such as peas will not work from a plane reliably. Aerial application generally works fairly well. A high-boy ground rig is another good option. There are some farmers who will inter-seed the cover crops when side-dressing their corn. This typically works best if you are farming North of I-70. You do need to pay attention to herbicide issues if seeding this early.”

How and when to terminate a cover crop is a popular consideration, and depends largely on the farmers comfort level and experience with the cover crop species. “We want it to grow as long as it can,” said Kok. “If you are a beginner, it is better that you don’t wait too long. Too many beginners have had a bad experience because they were not able to control the cover crop and had issues planting or took a yield hit.”

Delaying cover crop termination or even planting green provides the greatest soil health benefits. “Legumes need to bloom before termination if you want the nitrogen (N) benefit,” said Kok. “Plating beans into standing cereal rye and then terminate after is becoming more common. Planting corn into cereal rye is not recommended unless you have a lot of experience. The cereal rye takes a lot of the N out of the ground, so you need to have pop up and 2×2 at planting, and also do an early side-dress to get that N to the young corn if there is a lot of standing cereal rye.”

Using cereal rye has weed control benefits. “Resistant water hemp can be controlled with cereal rye,” said Kok. “Bayer did a study and found a 98% weed control with a cereal rye cover crop. The rye shades out the weeds. It also uses N and takes it away from the weeds. Cereal rye roots exude a chemical that impacts the shallow small seeded weeds. The chemical does not negatively impact the corn and soy seed with is larger and planted deeper. The way rye hurts corn is by removing the N.”

Residual herbicides can damage cover crops. “Some cover crops are more sensitive than others,” said Kok. “It depends on the cover crop species, and also the chemistry used. It can also depend on the weather and herbicide breakdown in environment. There are a number of herbicide tables on the internet, that break down the interaction of specific herbicides with cover crops. Depending on the goal, a farmer may need to adapt their herbicide program.”

The economics of cover crops is something that is multifaceted. There are number of variables to consider. “The majority of farmers growing cover crops start and try without a subsidy,” said Kok. “Some studies in Illinois show farmers can save $80-100/acre using cover crops versus none. In Ohio an analysis showed a $40 net benefit to growing over crops. Some of the returns depend on the ability of the crop to be value added. If you can harvest seed, make hay, or graze livestock on it, there are greater returns.”

Kok cautions farmers not to cut corners when purchasing seed. “Buy your cover crops from a reliable source,” said Kok. “Cover crop seed must be cleaned, and needs a seed tag with germination and the percent of weed seed. If you don’t have a tag, you could be buying someone else’s weed problems.”

The use of a roller crimper to terminate cover crops is gaining popularity. Many farmers often ask if the blades on a crimper should the blade touch the ground, or how much clearance should be allowed. Eric Neimeyer, a farmer in Delaware County uses a crimper and shared his experience. “We have the full weight of the crimper on the ground, and do not have the wheels holding it up for clearance,” said Neimeyer. “The actual crimping of the cereal rye is the goal, and it is the weight of the tool that puts the crimp into the stem of the rye. 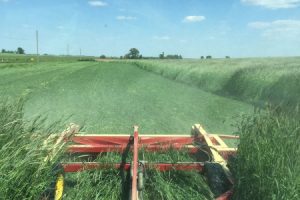 The cereal rye needs to be at a minimum in boot stage to kill with crimper. You want to get it before it goes to seed.”

Blade designs vary by the manufacturer. “There are straight, V form, multiple rows, and chevron blade designs on roller crimpers” said Neimeyer. “Wrapping is a concern if farmers are not using an actual roller crimper that is designed for it. Using other tools such as a cultipacker, or rolling baskets not designed for cover crop termination will lay the crop over, but not crimp it, and you will also have wrapping issues. Farmers need to lay rye down in corn, or the corn will fight the cover crop rye for the sunlight.”

Some planters have rollers in front of the row units. Some have a roller in front of the tractor or entire planter. “More farmers are planting first, and rolling second,” said Kok. “It gives the farmer more time for the cover crop to grow, and also allows farmers to focus on planting first, and then rolling and crimping the cover crop. Direction is an issue if a field is rolled first, then planted. Planting in the same direction is important when trying to avoid wrapping. 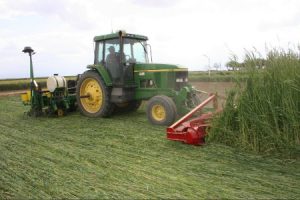 The chevron bars make a smoother ground surface for better tractor ride and smoother for the planter.”

Rolling cover crops in soybeans after the beans have emerged is gaining popularity,” said Kok. “Some studies show it helps the beans be more vigorous.”

Kok recommends when starting with cover crops, to first using a lighter seeding rate with rye. “Beginners may want to use a lighter seeding rate, such as 1 bushel/acre,” said Kok. “This makes for easier rye termination, but may not be as effective at weed control. If 2-3 bushels/acre rye are used, it will do a better job at weed control, but can be much harder to terminate with roller, and there is a lot of additional residue to deal with.” 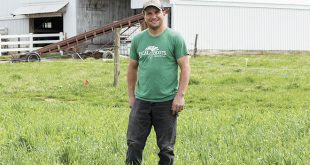