Proficiency Awards – Members applied for a district and state proficiency award. They were recognized for having an outstanding Supervised Agricultural Experience program in one of 47 areas. Applicants just received notice of interviews for being Top 4 in the State candidates. They will now be interviewed by an industry panel of judges and be recognized at the Virtual State FFA Convention.

Goat Production – Emma Sutherly owns and operates Team Sutherly where she is partner with her twin brother in the raising and marketing of goats. She holds an annual sale to market the kids she has raised.

Vegetable Production – Lauren Wright owns and operates Wright’s Sweet Corn, a 1acre sweet corn patch. She markets her sweet corn through a roadside stand and at the Troy Farmers Market.

Also applying were Carter Gilbert in the Service Learning Proficiency and Samuel Sutherly in Goat Production. Samuel placed third in the district. 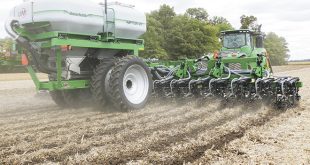 When it comes to strip-tillage products, Unverferth has led the industry in innovation since the …