After a warm December and January but chilly February, Ohio’s winter will go down as one of near-average temperatures for the season. This past winter also ranks as the 23rd driest on record (1895-2021). This was a bit unusual given the cooler than average sea surface temperatures in the tropical Pacific Ocean, a pattern referred to as La Niña, and one that often brings wet weather to the Ohio Valley during winter and early spring.

A more active pattern has certainly set in over the last several weeks, especially across southern Ohio. Precipitation for the last 30 days shows quite a contrast between northern and southern Ohio, with less than 1 inch falling across northwestern counties, while areas near the Ohio River have experienced more than 4 inches. With long-term lingering dry conditions relative to average across northern Ohio, the current U.S. Drought Monitor depicts more than 50% of the state in abnormally dry conditions, with Fulton, Lucas, and northern Wood counties currently in moderate drought conditions. Whether this long-term dryness will have an impact on the summer growing season could largely be determined by the weather pattern over the next several weeks.

A system that brought rain (freezing rain and sleet to some areas) across the state on Monday will be moving out of the region on Tuesday. After a brief break on Wednesday, a potent system will move through on Thursday with another round of showers and thunderstorms. Under the influence of high pressure, conditions will dry out over the weekend with fair weather expected. Highs in the 50s and 60s midweek will trend cooler for Thursday and Friday, then slightly warmer temperatures will resume for the weekend. The Weather Prediction Center is currently forecasting 0.75-1.50” of rain across Ohio over the next 7 days.

The latest NOAA/NWS/Climate Prediction Center outlook for the 8-14 day period (March 23 -29) and the 16-Day Rainfall Outlook from NOAA/NWS/Ohio River Forecast Centershow a strong probability of above average temperatures and elevated probability of above average precipitation (Fig. 3). Normal highs (north-to-south) during the period are in the upper-40s to mid-50s, lows in the upper-20s to mid-30s, with 0.5-1.00” of precipitation per week. 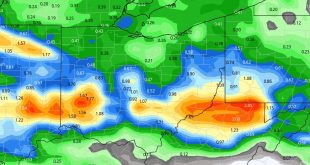 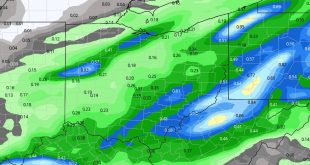 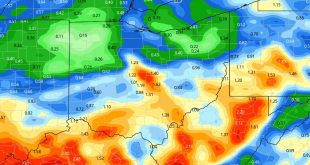