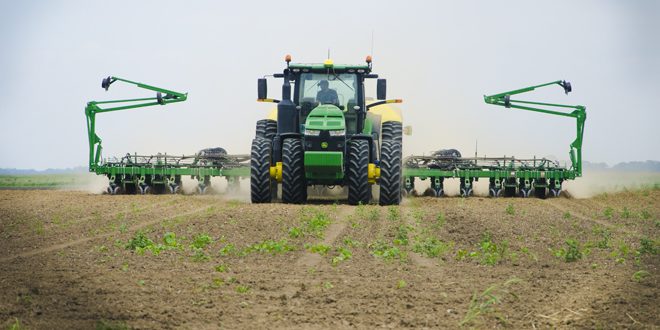 I favor early planting if the ground is ready. However, earlier planting also requires early weed control. I saw several fields last year where weed control was not very effective, perhaps due to too much rain. Is early weed control necessary? Yes, because the micro-environment of each plant is very important for their ability to reach maximum yield potential. Plants sense early on if they have competition from weeds or other crop plants, and they start to react and plan their future accordingly. If growers can reduce pressure from weeds, it will encourage crops to produce more yield.

It is especially important to control weeds early so herbicide-resistant weeds won’t get started. Many weeds, such as marestail and waterhemp, have developed resistance to glyphosate herbicide because it was used on millions of acres of corn and soybeans. Genetic and chemical suppliers promoted the use of glyphosate in spite of warnings by many university scientists and crop consultants. Many weed species are now resistant to an herbicide because of over-use. The lesson from glyphosate resistance is obvious: we should not become dependent on a single weed control.

The leaves and roots of young corn seedlings are not long enough to touch other plants and “feel” that they don’t have elbow room. So, how do they know they have too much company? All green plants have chloroplast cells that capture energy from sunlight to produce carbohydrates. Stomata (microscopic windows in leaves) allow plants to get carbon dioxide from air and give off oxygen during the day. Roots collect water, nitrogen and other nutrients. With these ingredients, a corn plant makes sugars, starches and proteins. Eventually, these products are deposited in the kernels.

Research indicates that light reflected from the chlorophyll of nearby plants signals how close they are to their neighbors. It doesn’t matter that many of the plants may be weeds. Therefore, light reflected from the chlorophyll of weeds can make plants react to perceived over-crowded conditions. Crop plants see weeds as too much competition and make early decisions which can affect and reduce yield potential. If weeds are too close, crop plants grow taller and are spindly because they are trying to beat other plants to sunlight.

When new herbicides are created and survival of certain species is threatened, Mother Nature steps in to protect her “babies” from harm by changing the weeds with genetic mutations. Waterhemp became resistant to the ALS chemistries and PPO inhibitors. It later gained resistance to glyphosate, HPPD and 2, 4-D herbicides. A similar situation was created a few years ago when the existence of certain weeds was threatened by Roundup and they mutated and developed resistance to that chemical. However, if growers can control these weeds early, there may be big harvest dividends.

Farmers will want to plant a population that is high enough so there isn’t wasted space, but not plant so many seeds to cause excessive competition.

Some growers may want to consider bumping seeding rate to get the plant population they really want. No matter how much technology is on a planter, there will still be some slippage between seeding rate and final population. Planting 32,000 seeds per acres will likely produce closer to 30,000 plants per acre. To obtain 32,000 plants at harvest, consider seeding rates closer to 33,000 to 34,000. Germination isn’t 100%, no matter what seed you plant. There will also be seeds which attempt to germinate, but encounter problems, such as cold, wet, or compacted soil. Seedlings may leaf out underground and not emerge, or emerge and not produce a productive plant. Some agronomists suggest using 5% as a guideline: plant at least 33,600 seeds per acre to get 32,000 plants per acre. Making appropriate adjustments, coupled with early weed control, helps attain higher yields.