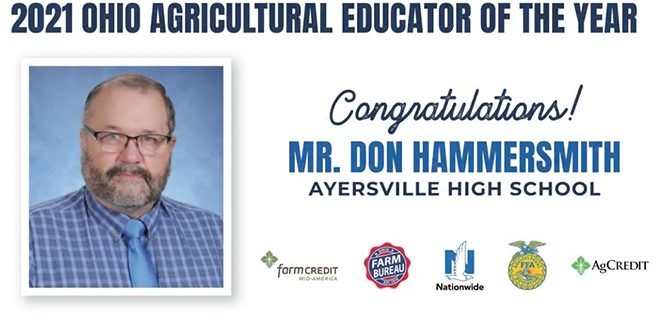 Presented by Nationwide, the Ohio FFA, Ohio Farm Bureau, Farm Credit Mid-America, and AgCredit, the Golden Owl Award recognizes agricultural educators across Ohio for their tremendous contributions to helping the next generation of agricultural leaders.

Through the program, students, fellow teachers and other supporters can nominate their favorite agricultural teacher and summarize what makes him or her the best in the state.

On Thursday, April 29, Don Hammersmith from Ayersville High School was named the 2021 Ohio Agricultural Educator of the Year. Along with the title, Hammersmith will win the $3,000 grand prize to support continued ag education efforts at Ayersville. Hammersmith is known for his high standards as an educator, his commitment to students, and his value as a role model.

“Mr. Hammersmith has been a teacher at Ayersville High School for over 25 years. During this time he has impacted the lives of students by teaching life lessons through supervised agricultural experiences, lab assignments, research projects, and Career Development Events,” said Allison Engel, 2020-2021 State Treasurer from the Ayersville Chapter. “He has also been diligent in his work to support students in his community through his participation at the Defiance County Fair. Thank you for all you do for your students, your school, your community and ag education in our state.”

In February, 10 teachers were announced as finalists for the 2021 Golden Owl Award. They each received $500 to their school ag programs and an engraved plaque. The other finalists were:

Agricultural teachers play an essential and selfless role as they work to prepare future generations for successful careers. After recognizing 10 exceptional Ohio teachers as finalists through the Golden Owl Award, Nationwide, in partnership with the Ohio Farm Bureau and the Ohio FFA, selected Don Hammersmith, agricultural teacher at Ayersville High School, as Ohio’s 2020-2021 “Ag Educator of the Year.”

Hammersmith was formally recognized as the Golden Owl Award grand prize winner during the Ohio FFA State Convention. In addition to the title of Ohio’s Ag Educator of the Year, Hammersmith received the coveted Golden Owl Award trophy and Ayersville High School received a $3,000 Nationwide-funded donation to further its agricultural education efforts.

Hammersmith’s nominations described him as humble, dedicated, and selfless. One nomination read, “He works tirelessly to provide opportunities for his students to succeed in whatever path they choose.” Another one states, “Since he took over the program nearly 30 years ago, he has been able to produce dozens of State degree winners as well as dozens of National degree winners through FFA. Our students benefit greatly from Mr. Hammersmith’s program. He is a true educator and is vital in our small community’s lifeblood.”

As the number one insurer of farms and ranches in the United States1, Nationwide established the Golden Owl Award with its state partners to shed light on the contributions of Ohio’s leading agricultural teachers and provide additional resources to support their programs

“With deep roots in agriculture, Nationwide is proud to recognize the men and women who are making a difference in our communities as they help students pursue their passions,” said Brad Liggett, Nationwide’s president of Agribusiness. “We’re honored to recognize the contributions of teachers, highlight the growing need for their services, and supply additional resources to help provide students with optimal learning experiences.”

Nationwide supports the future of the ag community through meaningful sponsorships of national and local organizations. In conjunction with the Golden Owl Award, Nationwide is donating $5,000 to each participating state’s FFA, including the Ohio FFA, to further support the personal and professional growth of students, teachers and advisors alike.