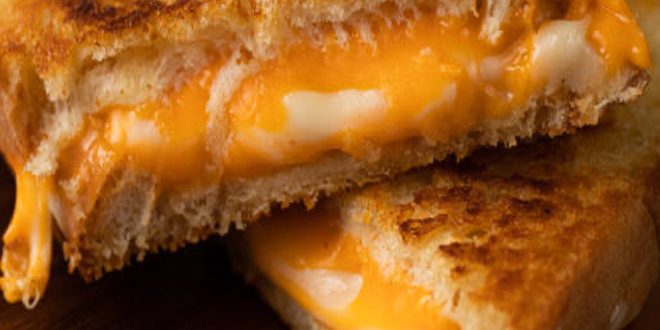 By Shelly Detwiler, a berry farmer and dietician

Happy Grilled Cheese Day! I cannot be the last to know about this momentous occasion on April 12, can I? Grilled cheese sandwiches are a beautiful thing, and this is truly a holiday to celebrate. There is nothing simpler and a work of art than a grilled cheese sandwich. Growing up in Plain City I headed to high school in 1979. An off the beaten track, hidden gem was a restaurant called The Dutch Kitchen, just a few hundred feet from the front door. The smells that wafted across the beautiful green grass front lawn of Jonathan Alder HS were like the Pied Piper’s magic pipe putting already ravenous teenagers in a trance, as we followed the tantalizing smells to enjoy the “Amish” culinary delights. One of their specialties to teens far and wide across the district were their grilled cheese sandwiches. Nothing gourmet, just three simple ingredients. The foundation of the awesomeness was thick slices of homemade bread sandwiched around cheese, which I am sure was processed, and of course slathered with butter grilled to a golden work of art. Once at your table, the sandwich was cut in half and delightful cheesy deliciousness oozed from the middle. My love for grilled cheese has never wavered since. In the years that followed, I have tried to replicate grilled cheese in my own kitchen, never succeeding in duplicating the perfection of The Dutch Kitchen top prize.

Paul would say it is a big Strike Out. I primarily use commercial loaf bread — STRIKE ONE. A big STRIKE TWO in his mind is that I rarely use butter. My only excuse is that I’m trying to be a little healthier with a nonstick pan and cooking spray. And finally STRIKE THREE: golden perfection is rarely achieved. My aging process has given way to multitasking or “squirrel.” Paul’s grilled cheese ends up more like blackened cheese. More than once, I have been known to scrape charred particles off the sandwich and flip it to the underside hoping he does not notice.

The History of Grilled Cheese from howstuffworks.com states that 75% of people who buy sliced cheese are buying it for grilled cheese. Cheese and bread have gone together for thousands of years. The story goes for modern grilled cheese, as we know it, was created back in the early 1900s. Toasted and melted cheese sandwiches were the rage, but it wasn’t until the 1960s when grilled cheese became the norm terminology. Americans have gone crazy for grilled cheese since then. In 2003, a guy in Los Angeles started the Grilled Cheese Invitational which ran for 11 years with thousands competing for the top cheese.

Today grilled cheese is featured on menus far and wide. Melt, a gastro pub that started in Cleveland, now has 12 Ohio locations specializing in you guessed it, grilled cheese. Their menu features over 25 variations of the delicacy along with wings, salads and other cheesy delectables. Recipes for grilled cheese can be found using a hodge-podge of breads, waffles, fillings and prepared on anything from panini/George Foreman grills, and toaster ovens to the traditional way slathered with lots of butter on the stovetop.

No matter your favorite way to appreciate a grilled cheese, be sure to make a great one this year. Let us make it a viral holiday to remember by flooding social media with your magically delicious grilled cheese creations!

Assemble sandwiches. Start with one slice of cheese on each of the 4 pieces of bread. Top one cheese with one-fourth of chiles, tomatoes and cilantro. Top with remaining cheese and the second slice of bread.

Grill in a nonstick skillet or griddle over medium heat until golden brown, about 3 minutes each side.

In an 8-inch nonstick skillet over medium heat, cook the bacon until crisp, about 5 minutes. Tear in half and set aside.

Into the same skillet, add the brown sugar, onions and 1 tablespoon of the butter. Cook, stirring as needed, until the onions are golden, about 5 minutes. Transfer to a plate and set aside.

Heat a griddle panini maker to medium heat and add sandwich. Close the panini maker and cook slowly on medium heat for about 10 minutes until the cheese is melted and the inside of the sandwich is hot. The outside of the bread should be golden and toasted. Let cool for 2 minutes and cut in half.

1 tablespoon fat, such as mayonnaise, butter or olive, chili or coconut oil

Oven method (great for a crowd: Put a rimmed baking sheet on the middle rack of the oven and preheat to 450 degrees F. Make one sandwich per person: Sandwich 2 slices of cheese between 2 slices of bread. Spread or brush the outside of the sandwich with 1 tablespoon of fat. Place on the preheated baking sheet and cook until the cheese starts to melt, about 5 minutes. Flip the sandwich and bake until golden brown, an additional 5 minutes.

Panini press method: Sandwich 2 slices of cheese between 2 slices of bread. Preheat a panini press to medium heat. Spread or brush the outside of the sandwich with 1 tablespoon of fat and place in the press. Close the top and cook until lightly browned and the cheese is melted, 5 to 6 minutes.

Swiss and rye, brushed with mayo

Cheddar and brioche, brushed with butter