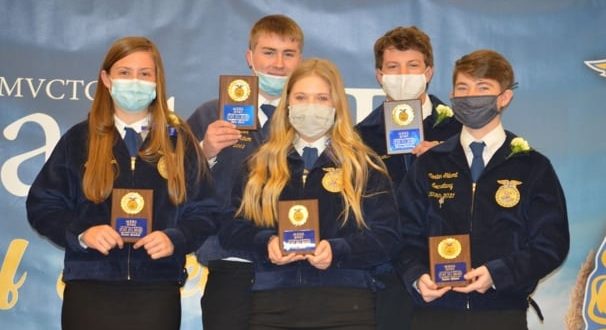 – Michael Bair was recognized as being a 2020 National FFA Proficiency Winner in the area of Poultry Production.

– In 2020 the National FFA recognized the chapter as a 3-star National Chapter. The chapter is recognized as a 2021 Gold Medal Chapter and a Top 10 in the state in the area of Building Communities.

– Three chapter officers, Carter Gilbert, Paige Pence, and Libby Carpenter submitted Officer Books for review at the State Evaluations.  All three earned a gold rating.  They will be further recognized at the 2021 State FFA Convention.

– Three seniors participated in the Senior Capstone Experience where they learn through hands-on experiences with an agriculture company. Jimmy Sutherly, Seth Wells, and Brayden Ingle present their employer with an appreciation plaque.

American FFA Degree Recipients
The American FFA Degree is the highest degree for a member to receive in the National FFA Organization. This degree will be bestowed upon graduates at the upcoming National FFA Convention.  Elizabeth Bair, Michael Bair, Ethin Bendickson, Savannah Holzen, Lucas Gilliland, and Kearsten Kirby will receive their degree in October in Indianapolis, Indiana.