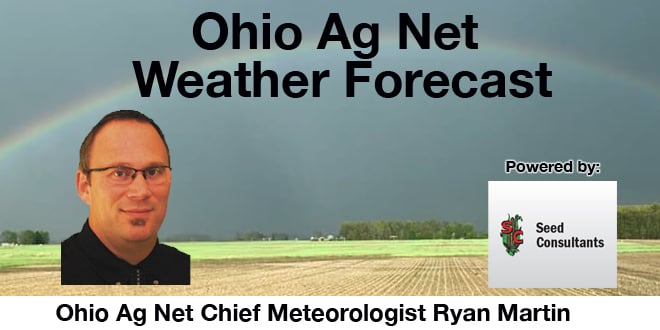 What I can tell you though, is low pressure is very slow to move through the upper Midwest. Right now, this low pressure center that’s caused all the moisture up to this point is still meandering through Minnesota and Wisconsin, until it lifts North and dissipates in Canada, we’re still gonna see circulation around that low.

And so that’s the reason why I’m keeping on again, off again, clouds in the forecast. And it’s the reason why I won’t completely rule out a couple of scattered showers here outside of this morning as well. Right on through the day to day. I do think that we start tomorrow dry, maybe even with some sunshine to kick off your weekend, but clouds come back quickly.

Rain and thunderstorms will come back later tomorrow afternoon, continuing through tomorrow, overnight into early Sunday morning. I’m not concerned about strong thunderstorms, but there will be a few rumbles of thunder around a particularly West and South. And then while the initial wave comes through, We’re going to be stuck with wraparound, a backside moisture that probably hits West central and the Northwest Ohio, at least through the afternoon, Sunday, and even into the midnight hour early Monday morning, all told when you put those little spats of moisture together, we’re probably looking at half to one inch rainfall totals across 100% of Ohio through this weekend, Saturday and Sunday, I don’t see much happening Monday next week.

I do think we have to keep an eye out for a few lingering showers in Northern tier counties. Us 20 northward for the most part on Monday, but central and Southern Ohio, we can see partly to mostly sunny skies trying to emerge. The big story for next week has nothing to do with moisture. It’s about cold air.

Tuesday through Saturday, a significant surge of Canadian air comes southward across our region here. Temperatures well below normal. I don’t think we see any significant precipitation in that period. As a matter of fact, I’m taking moisture out for anywhere in that Tuesday to Saturday forecast window, we see sunshine, we see blue sky, but we see temperatures a good 10 to 15 degrees below normal for daytime highs. And I do think we see several rounds of frost and freeze conditions coming in. In the overnight, during that period later on, late Saturday into Sunday, temperatures try and moderate in the moderating air. I do think we see scattered showers develop for Sunday the 18th can’t rule out anywhere from a 10th to maybe three or four tenths there. Coverage around 60% the way it looks right now. So the main focal points of this forecast, in my opinion, over the next 10 days, moderate to heavy moisture potential this weekend, Saturday, Sunday is that little wave combines over Ohio.

And then number two. The big cold air surge for next week, do not take that lightly. It’s going to give us a little thought of pause on field work and in Southern and Southwestern parts of Ohio, where we really ramped it up and got a lot of crop in the ground, watch closely for those frost and freeze conditions and see if it has any impact.