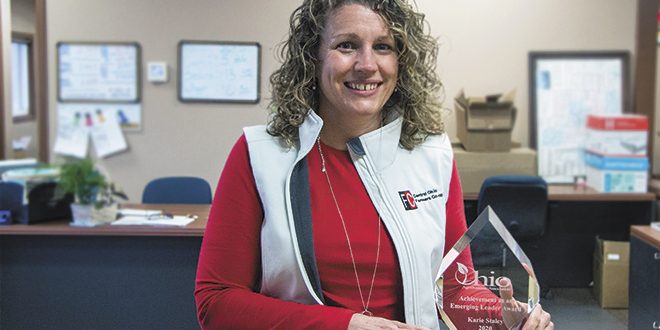 When Karie Staley found out she was selected to be the new branch manager for Central Ohio Farmer’s Co-op in Mt. Gilead, she was more than excited.

After nearly 20 years dedicated to the company and to her customers as a sales agronomist, she began her role as the branch manager in early 2019. She had no idea at the time what the year would hold, but was looking forward to getting started that spring.

“We were ready to go, had everything set and ready to roll, but it just started raining. Then it kept raining,” Staley said. “People didn’t want to do prevent plant, but then the days kept rolling by and farmers had to make an economic decision.”

Customers of the cooperative kept calling to cancel their orders.

“You can send seed corn back, but you can’t send treated soybeans back,” Staley said.

Faced with her first major challenge as branch manager, Staley worked with the other four Central Ohio Farmer’s Co-op agronomy locations to get product moved.

Data from the USDA Farm Service Agency office published in August of 2019 indicated over 27,000 acres in Morrow County were enrolled in the prevent plant program, and statewide prevented planting numbers were the highest ever.

“There were definitely some major learning curves that first year,” Staley said.

Growing up on a farm in Waldo, Staley was not immune to the struggles farmers can and do endure. And, though it was not easy in 2019, she was up to the task.

“I grew up on a grain farm and then my sisters and I raised hogs and cattle until we left for college. I attended the Ohio State University where I majored in agribusiness and minored in animal sciences,” Staley said.

During her last quarter of college, a position with what was then Central Ohio Farmer’s Co-op (then Marion Landmark) in Ashley had become available.

“I took the position there in Ashley, which is no longer open, in March of 1999. My dad had actually tried to convince me to go to school for agronomy. I hate to admit it but parents are usually right,” Staley said with a laugh.

In December of 2000, she changed locations to the Mt. Gilead branch where she worked as a sales agronomist.

“I’ve always just loved working with customers,” Staley said. “I’ve been working here long enough that I’ve gotten to really know my customers, I’ve seen their kids grow up and they’ve gotten to see mine grow up as well. I’ve even gotten to meet and see some of their grandchildren grow up too.”

Her dedication to her customers and to her employees earned Staley the 2020 Achievement as an Emerging Leader Award from the Ohio Agribusiness Association (OABA). According to the OABA, this award is presented to someone “who represents the spirit of leadership as a growing agribusiness professional.” She was recognized on stage at OABA’s annual conference in January of 2020.

“I was nominated by my CEO and then the employees come together to explain why they thought I deserved this award,” Staley said. “It’s pretty neat that my coworkers think of me as a leader.”

Her CEO, Scott Crowder, states in the award video produced by OABA, that Staley’s ability to work with customers and employees is what makes her stand out the most.

“They know her and they trust her,” Crowder said. “The guidance she’s going to give them will make them successful. She’s fully respected. Everyone knows that she knows what she is doing.”

When asked about the award, Staley remains humble.

“I am a pretty low-key person, I don’t necessarily love to be in the spotlight,” she said.  “I just like to do a good job. In a role like mine, it’s not always about you, it’s about the other people you’re working with.”

Staley currently oversees the day-to-day operations for everything from the agronomy department to the grain trucking to the feed store.

“The Mt. Gilead branch is the most diversified location, we have agronomy, grain, energy division, custom feed grinding and a drive-through,” Staley said. “The plant employs around 18 people across the various departments and services customers in multiple surrounding counties.

“I have great employees who back me up. I couldn’t do it without them. In ag retail, plans change by the hour, so we have a lot of great communication. I think that a major part of effective leadership is being able to communicate with your team.”

Only a few months after receiving her leadership award, Staley was faced with her next big challenge. The COVID-19 pandemic was declared in March 2020, right before spring planting. With agriculture being considered an essential industry, Staley and her team had to quickly adjust plans and retrofit the office to service customers.

“We have an outside-facing window that we put a shelf on the exterior for customers to write on when they came to do paperwork,” Staley said. “We did most of our necessary face-to-face business through that window until the weather got too cold.”

Customers who enter the building can still see the friendly faces of the staff, but it’s through plexi-glass. Sales reps were encouraged to limit their in-person interactions to keep everyone safe.

“Just like everyone else we relied pretty heavily on our phones and technology to do business,” Staley said.

As the year went on, a slow dry down, coupled with heavy rain during harvest season and a few humid days, led to other issues. It was the perfect condition for vomitoxin to grow, and as corn harvest picked up so did the concentration of vomitoxin in the crop.

“The vomitoxin issue is one we are still working through to this day,” Staley said. “Having to explain to your customers, ‘Sorry, I can’t take your corn’ is never an easy conversation to have.”

The Mt. Gilead location’s grain storage ended up being full by the time the worst of the vomitoxin was moving through the system.

“We are testing grain from the bins here,” she said. “It’s hard because the levels are varying, depending on where you pull the test from in the bin or on the semi.”

The majority of the corn sold to the Mt. Gilead branch is sent on to local hog producers to be used as feed.

“I’ve just been doing my best to educate farmers, letting them know that I am not the end-user for their corn and that it’s further processed into livestock feed. Unfortunately high vomitoxin in feed can have negative results for certain kinds of livestock,” Staley said.

When she’s not managing her cooperative, Staley and her husband, Craig, are managing their own grain farm and raising three daughters.

“My husband farms full-time, so in the spring and the fall things can get pretty crazy,” Staley said. “We both just kind of go with the flow, balancing work and being a mom was challenging at times but you just have to get both of those jobs done. My boss was pretty great about being flexible, I remember bringing my girls with me to work on Saturday mornings.”

While she wasn’t the first female to be in her current position, Staley recognizes that it is significant that a woman holds this leadership position.

“Agriculture is definitely still a man’s world, but I am the go-to person now for my customers,” she said. “It took time to build that rapport and to build that trust, but I have really great relationships now. They just had to get to know me.”

Her passion for agriculture apparently runs in the family, as Staley’s sisters also pursued careers in the field. She hopes her own daughters will admire their examples.

“My oldest daughter is a junior in high school and I hope she considers attending college for a degree in some sort of agricultural field,” Staley said. “There are so many opportunities in agriculture for everybody.”

This emerging agricultural leader has dealt with plenty of curveballs in her first two years of her managerial role, but Staley remains optimistic as ever.