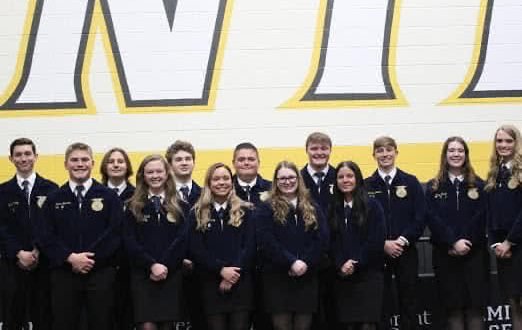 The Miami Trace Great Oaks FFA held its annual banquet April 23rd at the Miami Trace High School. Although parts of the banquet were altered due to Covid-19, the chapter officers and advisors were able to make it run smoothly. The chapter recognized members, advisors, parents and other community members who made positive contributions to the chapter. Many members were recognized for having numerous achievements throughout the year. The senior FFA members received over $15,000 in scholarships during the event.

Sophomore member Jacob Cline began the program by singing the national anthem, junior member Emily Moser introduced the meal and led the over 200 guests in prayer.

After the conclusion of the meal, retiring president Graham Carson welcomed everyone and was followed by junior member Kennedy Worley with the introduction of special guests. There were over 200 people in attendance and the meal was catered by The Crown Room of Washington Court House.

The highest honor an FFA chapter can bestow on any individual is the honorary chapter degree. This year, the chapter honored two individuals, Julie Reisinger and Matt Barga. Julie and Matt are the current Miami Trace High School Guidance Counselors. The chapter is very thankful for the support and help they received from the two members throughout the troubled year.

There were 61 recipients of the greenhand degree. To receive the honor students must complete public speeches, community service, and recite the FFA creed. The next degree members are able to earn is the chapter degree. This year there were 55 members that continued their enrollment in Agricultural Education and received their Chapter Degree. Those members received the highest degree a chapter can bestow upon its members.

This year 14 members received their State FFA Degrees. This honor is awarded by the Ohio FFA Association. These students received the gold charm of the State FFA Degree after the virtual recognition the following week. This is the highest degree that the National FFA can bestow upon its members. The members that received their State FFA Degrees were Libby Aleshire, Blayne Ferguson, Luke Anders, Alexis Hagler, Bryce Bennett, Madison Johnson, Drew Black, Wyatt Mayer, Connor Collins, Taylor Moore, Tyler Cummings, Weston Pettit, Cole Enochs, and Emily Taylor. The Miami Trace FFA Chapter also has 7 members receiving their American FFA Degree in the fall of 2021. Those members are Grant DeBruin, Morgan Eggleton, Aubrey McCoy, Anita Pursell, Aubrey Schwartz, Matthew Warner, and Victoria Waits. The chapter is extremely proud of their members and the accomplishments they have made.

Proficiency awards are awarded to students who excel in the development of their SAE (Supervised Agricultural Experience) project. In the area of Organic Agriculture, Grant DeBruin focused on entering hours, involvement, and activities into his AET online record keeping system for his work on the family organic dairy operation.  Grant began recording his unpaid hours on the family farm as a freshman.  Later, he became a paid employee where he increased his responsibilities and time commitment.

In the area of Goat Production, Connor Collins owns and operates C Squared Boer Goats. He started out with only two head of goats, and has now expanded to 6 head of breeding does. He has successfully raised 15 head of market goats for show at the local county fairs. Connor received 2nd place in the district.

In the proficiency area of Agricultural Services, Tyler Cummings’ SAE consists of working for the Wendt Group where he has logged 335 hours assisting with the preparation, sale and dispersal of agriculture auctions. Tyler spends his time prepping equipment and assisting buyers with loading auction items.

In the area of Poultry Production, Bryce Bennett started out raising chickens

and turkeys for exhibition at the county fair. From there, he has grown his operation to include commercial broilers and holiday turkeys raised for private customers and for retail sale at Jones Farmers Market. In 2020, Bryce produced 360 head of market chickens and 130 head of turkeys.

Lahni Stachler competed in the Agricultural Education proficiency area.  Lahni logged her time planning and presenting agricultural topics to other students and at various public forums. Her 260 hours of SAE records include teaching the AFNR Self-Contained class here at the high school for one class period every day of the week this entire school year, planning and preparing for a community ag safety day, and preparing and presenting agriculture lessons to youth in the community.

In the area of Ag Processing, Blayne Ferguson has spent many hours working for DB Yummers where he assists in the production, bottling and distribution of barbeque sauce. Through his involvement in this SAE, Blayne has expanded his knowledge in food science, food safety procedures as well as marketing and sales.

Derek Mitchem’s SAE consists of raising and breeding market pigs. In the area of Swine Production, Derek started by retaining 1 replacement gilt and has grown his operation quite a bit over the past 4 years.  In 2020, Derek raised and marketed over 90 head of market pigs and currently has 13 breeding sows.  Derek plans to continue his operation after he graduates.

In the area of Ag Services, Aubrey Schwartz utilized her leadership, communication, and organizational skills to provide bookkeeping services to her father’s standardbred horse operation. Aubrey keeps financial records on each horse and manages the billing for the business.  Aubrey was a finalist in the State last year and placed 1st in the District this year.

Every year freshman members are bestowed with the title of Star Greenhand. These members are the most involved in leadership and chapter activities throughout the year in the freshmen class. This year the Star Greenhand was Mckenzie Cory. Also, one senior member was awarded the title of Star Farmer. The Star Farmer for 2021 was Graham Carson. The chapter also rewards a member as the Star Chapter Agribusiness member. This is based on how many points the member has earned over their four years in the MT FFA chapter. This year the winner was Lahni Stachler.