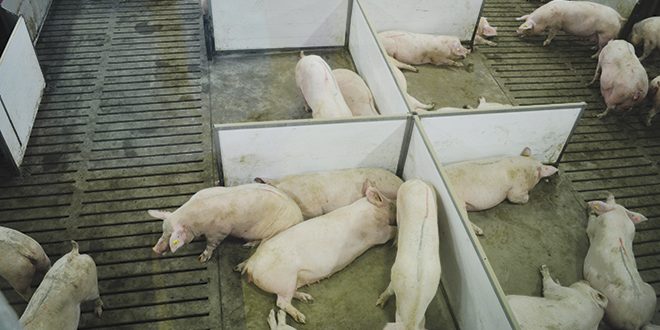 While California consumers have demonstrated a love of pork, they have created some real challenges for U.S. pork producers. Due to a number of restrictions in the state, nearly all of the hog producers moved out of California despite the high demand for pork products.

“California is by far the largest state in the country, representing 13% of the U.S. population and about 15% of the domestic pork market,” said Michael Formica, assistant vice president and general counsel for the National Pork Producers Council. “It takes 750,000 sows to supply the California market yet only 1,500 sows are housed in the state. Most of the pork consumed in California is produced in other states.”

“The most important thing to know about Prop 12 is the residents of California were asked a simple question: ‘Do you think farm animals should be protected from cruel treatment?’” Formica said. “That is a yes or no question and, of course, everyone said, ‘Yes, animals shouldn’t be treat cruelly. We agree!’ Unfortunately, California voters were misled by this question, one that failed to provide context for the high standards of animal care followed by U.S. pork producers.

“Prop 12 is the latest example of state ballot initiatives animal rights’ groups have imposed on livestock agriculture. It requires group housing for sows and sets very prescriptive minimum square footage requirements. It removes the use of breeding stalls. Most production would see a 20% to 25% reduction in efficiency. With Prop 12, California has gone one step further to say you cannot sell pork in the state that came from an animal that was not compliant with the prescriptive California standard. That is causing a fair amount of disruption.”

Compounding the disruption and uncertainty is the fact that the required guidance on Proposition 12 compliance has yet to be published by California.

“Prop 12 requires the state of California to come out with detailed regulations on how they are going to implement this, how they are going to do inspections, what do specific terms mean, the nuts and bolts, etc. These details are critical if you’re a hog farmer considering compliance that requires major investments to retrofit your facilities,” Formica said. “Final regulations were due Sept. 1, 2019. California has not produced final regulations or even proposed regulations. That proposal process takes about a year. We have been engaging California to better educate them about pork production and, hopefully, help shape common-sense regulations. It is very unclear if California will have regulations out by Jan. 1, 2022, the implementation date. Even if they finalize regulations, it is unclear how many people will actually be able to make that investment to comply.”

NPPC, along with the American Farm Bureau Federation, has filed a lawsuit with the U.S. Court of Appeals for the Ninth Circuit challenging Proposition 12 as invalid under the Commerce Clause of the U.S. Constitution. Oral arguments in the case were held on April 14 and a ruling is expected by mid-summer.

“It is our hope that the court will see this the same way we do, concluding that it is unconstitutional for California to regulate beyond its borders,” Formica said.

While many specifics are unknown, the square footage requirements of Prop 12 are 24 square feet per sow. This is a particularly challenging number for hog producers in Ohio.

“To be eligible to sell any types of pork products in California, the product must originate from a sow in open pen housing that has at least 24 square feet per sow. That 24 square feet is the key,” said Duane Stateler, a contract hog producer in Hancock County. “You may remember back in 2009 we had Issue 2 to do away with gestation stalls for pork production. We made an agreement here in Ohio that by 2024 we were to be all open housing for sows while they were pregnant and we have made that transition. We have made that transition, providing about 20 square feet per sow. That is a lot of extra open space because pigs like to congregate together. If you built the world’s biggest barn and put 80 pigs in it, they’re going to be in two or three spots all nestled together. That’s just the way pigs are. So, 20 square feet is an awful lot of pen housing. Now, California is asking producers in Ohio to make huge investments for a rule that has yet to be written. Right now, to meet their housing qualifications in Jan. 1 of 2022, those sows needed to be bred back in March.”

Beyond hog production, specific rules like Proposition 12 have implications throughout the food chain.

“You’ve got processors with a problem because they do not have any products that qualify,” Stateler said. “Most meats for fast food are pre-cooked and Proposition 12 only affects uncooked pork products, but foods like the McRib are not pre-cooked. So, there would be no McRib in McDonald’s in California.”

Adding to the confusion of California’s requirements is discussion in other states about other arbitrary requirements of food production. Stateler pointed out hog industry concerns with a proposed ballot initiative in Colorado: Protect Animals from Unnecessary Suffering and Exploitation (PAUSE). This initiative, among other provisions, would require livestock to reach 25% of their natural lifespan before slaughter.

“This means that rather than a hog going to market in six months, it will go to market in 3 years. If passed, this initiative would require hog farmers to build barns to hold pigs for 3 years instead of 6 months in order to gain access to the Colorado market. That is a major change. Consider the position hog farmers will face if other states develop their own production standards,” Stateler said. “Our food distribution system is a finely tuned machine that is set to deliver fresh meat to your grocery store in 5 to 7 days. This machine will be seriously disrupted if we must comply with a patchwork of different regulations in Colorado, California and other states. Meanwhile, 98% of consumers just want affordable meat at the counter and the ability make their own purchasing decisions.”