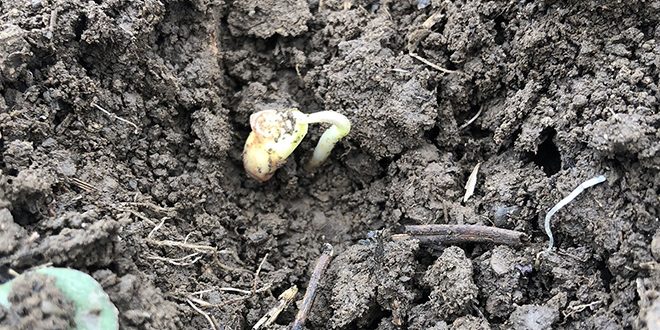 Soybean planting progress was off to a good pace in April. All of that came to a screeching halt with rains (and snow in some areas). The past week, dryer conditions and warmer temperatures  prevailed. As of May 23rd, Ohio has 66% of the soybean acres planted and 28% emerged. Some parts of the state are evaluating the potential need to replant some of the early April plantings. The heavy rains, crusted soils, and cold late April temperatures have raised some concerns with the soybean stand establishment.

Purdue University has evaluated planting dates and planting operations for several management scenarios as well as documenting soybean phenology (development). The following information is really to help provide some guidelines to forecast soybean emergence. Heat unit accumulation is used in estimating the development of many crops (emergence to successive leaf development). However, field conditions can alter the precision/reliability of heat units needed for soybean emergence such as planting depth, residue cover (e.g., no till vs. conventional till), rainfall (and really, soil moisture), soil temperature, and soil crusting.

We would anticipate soybean emergence (greater than 50% or VE) with the accumulation of 140 to 160 GDDs (Table 1). Saturated conditions will limit oxygen for plant respiration (i.e., burning energy for growth), and thus, extending the time (calendar days and thermal time) for emergence. If your planted soybean fields are in the “cool and wet” situation and not emerged after 160 GDDs, you should determine the viability/progress of the seedlings in preparation for replanting decisions.

Our normal goal is 100,000 to 120,000 plants per acre to optimize yield. However, we should not be quick to replant or overseed into an existing stand if the field is less than 100,000. Obviously, the distribution of plants at suboptimal stands will factor into the decision to replant. Approximately 70,000 plants per acre is the gray area for replanting or overseeding. If there are pockets that are much lower than 70,000 plants per acre, those can be filled in by overseeding. Soybeans will self-regulate so there should not be a concern of the “weed effect” from the different stages of development. Established plants will provide the majority of the yield (mainstem and branch pods); whereas, the overseeded plants will primarily provide yield from the mainstem.

Stand assessments need to count emerged soybeans AND the potential seeds or seedlings that may emerge. The below ground factor and weather forecast will play into these decisions. If the missing plants are due to seeds that have rotted below ground or the hypocotyls and cotyledons have snapped off, then the stand is what you have to work with in that field. Whereas, seedlings near the soil surface that need a softening rain could be the reinforcements that is needed for subpar stands.

The replanting operation will cause damage to the established plants (nearly 20% stand loss when overseeding with a 30-inch planter at an angle) and you still at the mercy of Mother Nature to have the replanted seed establish plants. Young soybean plants (VC stage, cotyledons and unifoliates) are sensing light quality to determine the need for branching out. Basically, if a soybean plant has few neighboring plants (little to no shading), branches are initiated to fill the void literally and produce pods on those branches. We simply need to be patient as these plants develop and fill in the gaps. The yield potential of the earlier established plants (albeit low stand) is usually better than the soybeans seeded in the latter half of May and certainly June. Replanting into stands of soybeans that are V2 (two unrolled trifoliates) often become more cosmetic early if the overall stand was above 70,000 plants per acre.

For example, the yield of a stand of 66,000 plants per acre was 50.6 bu per acre. Yet, the same stand of 66,000 plants yielded 51.5 bu per acre when 132,000 seeds per acre were added with a 30-in planter, which was not different (Figure 2). Furthermore if the decision was to start over completely, the yield potential was severely hurt in this trial (~mid 50 bu vs. 38 bu) since that planting operation was well into the growing season. In other words, the replanted field had a much shorter growing season. If a field was to get replanted completely in the middle of May, the yield potential would still be fair to good provided the stand would be established.

Replanting recommendations will be field specific, but factors to consider are seeding rate, maturity group, planting pattern, and weed control. Variety selection for replanting can be difficult, because we ideally want the whole field to mature at the same time to ease harvest operations. At this point (middle of May), I would not consider changing the maturity group on a replanted field. However, if we are making this decision at the end of May into June then the decision is a little more complex. General rules of thumb include that a 3-week delay in planting is about 1-week delay in maturity. A shift in 1.0 maturity group (MG) unit is approximately 7 to 10 day difference in maturity. Again, these are given as guidelines and not absolutes. Field conditions in August to September can also cause hasten (hot and/or dry) or extend (adequate soil moisture such as those wet pockets that are replanted) the reproductive period, which influence maturity timeline.