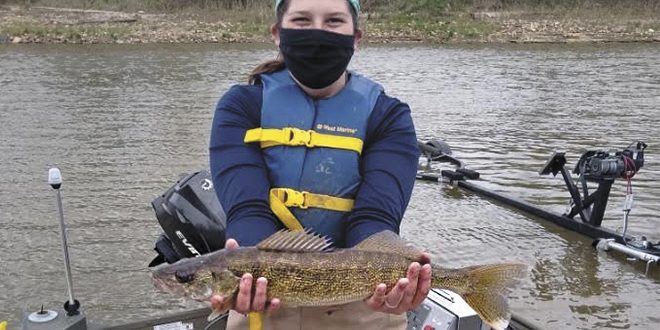 Great news for northwest Ohio anglers: a walleye has been found in the Sandusky River upstream of the recently demolished Ballville Dam near Fremont. University of Toledo graduate student Taylor Sasak has spent the last two springs searching for signs that walleye are moving past the site of the former Ballville Dam that was removed in 2018 on the Sandusky River near Fremont, and finally struck gold.

The fish was captured in late April while electrofishing in a boat as part of Sasak’s ongoing research project. She actually caught 13 walleye near Portage Trail Park and one walleye near Wolf Creek Park above the former obstacle, the first time walleye have accessed the habitat that had been blocked for more than a century.

“The Ballville Dam blocked migratory fish, such as walleye, from accessing upstream areas of suitable spawning habitat for over a century,” Sasak said. “By finding walleye upstream, we now know that they have access to more spawning habitat, which will hopefully increase the Sandusky River stock of walleye over time. This is great news for anglers as they will have more opportunities to catch walleye along the Sandusky River.”

The ongoing fieldwork is a collaboration between UToledo and the Ohio Department of Natural Resources Division of Wildlife (ODOW).

“This is the first documentation of walleye moving past the dam site since its removal in 2018,” said Eric Weimer, fishery biologist supervisor with the Sandusky Fisheries Research Station with the ODOW. “Taylor has been working on post-removal assessment of habitat and the fish community as part of a Division-funded graduate project and has been trying to document passage for two springs, so we are understandably excited.”

Sasak and Madison Myers are master’s students in the UToledo Department of Environmental Sciences and have been working on the research project together in the laboratory of Jonathan Bossenbroek, UToledo professor and chair of environmental sciences.

Ohio lawmakers have given final approval to legislation that would allow falconers in the state to use owls to hunt small game. Senate Bill 28 would permit Ohioans with a state-issued falconry permit to use owls for hunting animals such as rabbits and squirrels. To join the estimated 110 licensed falconers in Ohio, participants must be 16 years old or older, pass a written test, complete a two-year apprenticeship, and keep proper housing and equipment for their birds, among other requirements.

The owl idea was offered by Mick Brown of Martins Ferry, who serves as president of the Ohio Falconry Association. After passing the Senate unanimously, SB 28 passed the House 68-23.

State Rep. Kyle Koehler, a Springfield Republican sponsoring the bill in the House, said that 45 other states already allow the use of owls in falconry.

Bonnier Events has decided to cancel the 2021 Ohio Open Season Sportsman’s Expo, scheduled for July 30 to August 1, at the Greater Columbus Convention Center in Columbus. Next year’s dates have been set with the Expo returning to its traditional dates of March 18 to 20, 2022 at the Ohio Expo Center in Columbus.

“The name has withstood the test of time. Mosquito Creek Lake was formed by damming Mosquito Creek back in 1944,” the Ohio Department of Natural Resources said in a statement in response to the bill, according to AP. “Since then, Mosquito Lake State Park has become one of Ohio’s best state parks, best fishing lakes, and has one of Ohio’s most important wildlife refuges.”

Mosquito Creek Lake is in Trumbull County, where Trump won 55% of the votes in the 2020 presidential election in November.

The Ohio Department of Natural Resources (ODNR) recently announced the formation of the new Ohio State Parks Foundation, a nonprofit group focused on enhancing and protecting Ohio’s 75 state parks. The Foundation will work to enhance visitor experience at parks across the state by partnering with individuals, corporations, and other entities to support unique and innovative projects in the parks.

Since emergence of the coronavirus, many Ohioans have flocked to the outdoors to seek respite from the challenges of the pandemic. Between June 2020 and October 2020, visitors stayed an additional 72,608 nights in state park cabins and campgrounds compared to the same period in 2019. A record number of Ohioans registered paddle craft and purchased hunting and fishing licenses.

Founding members of the Foundation, include:

• Dr. Marcia Latta, vice president of university advancement at the University of Findlay

The Foundation will first be working to fund a project focused on inclusion. Funds will be used to enhance existing waterways and to create accessible experiences for all. For more information about Ohio State Parks Foundation and to support their work, visit ohiostateparksfoundation.org or contact Catherine Fynes, interim executive director, at 380-209-2284 or Beth Waldren, fundraiser, at beth.waldren@gmail.com