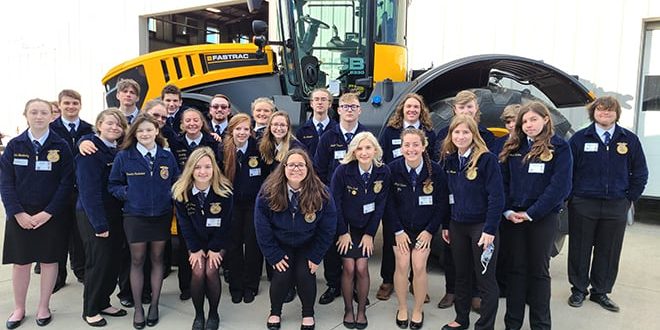 Members of the Zane Trace FFA recently traveled to the Ohio FFA Convention Celebration held at the Holmes County Fairgrounds in Millersburg, Ohio.

When the 2021 Ohio FFA State Convention was moved to an online format this year members of the Zane Trace FFA Chapter looked for a creative way to commemorate the event. The traditional tours of central Ohio ag businesses, competition interviews and sessions attended by over 6,000 FFA members at the Ohio Expo Center would be on hold for another year, but a new opportunity to celebrate with other FFA chapters soon took the place of the usual trip to Columbus.

Thanks to the efforts of agriculture instructors in Holmes, Wayne, Ashland, Licking and Ross Counties the 2021 FFA Funvention was planned for April 29th and 30th at the Holmes County Fairgrounds and Harvest Ridge Event Center near Millersburg, Ohio. Nearly 400 members from a total of eighteen chapters, including 25 from Zane Trace, attended the event. Each day they participated in live streaming of Ohio FFA Convention sessions, in person workshops related to agriculture careers and a trade show that featured nearly 50 business and educational vendors. Members also enjoyed catered meals and an awards banquet during which Dale Minyo of Ohio Ag Net broadcasting served as the emcee.  State degree recipients, proficiency winners, top CDE teams, gold rated officers and gold rated chapters were all recognized during the formal ceremony. Members were honored to have “the voice of Ohio Agriculture” call their names as they crossed the stage for each award area.

In addition to recognizing member achievement, the event also provided FFA members an opportunity to put the “living to serve” line of the FFA motto through an interactive service project.  Students worked in small groups to assemble clean up buckets for CROP/CWS disaster relief efforts.  They gathered the fifteen items needed for their buckets by answering questions related to programs sponsored by CWS which include disaster relief, sustainable agriculture and clean water access. The forty completed buckets were transported to First Christian Church in Mansfield to be distributed when needed to families in disaster areas.

The Zane Trace FFA members who traveled to Holmes County for the event came home after their two day trip with a deeper understanding of agriculture and FFA opportunities, enthusiasm for the upcoming school year and lots of new friends from around Ohio. Our chapter would like to thank Jaime Chenevey of the West Holmes FFA, all of the event sponsors and the Zane Trace and Pickaway Ross administration for their support of this event.

When most high school students reach their 16th birthday they usually dream of getting the gift of a new car.  Braylee Burkitt dreamed of getting the gift of a new pig. Earlier this spring, she completed an application for the Ohio Berkshire Association’s Donor Gilt program in the hopes of being selected as the recipient of a gilt to start her own herd.  On April 26th, Braylee got the call she had been waiting for when she was informed that she would be the proud owner of a purebred Berkshire gilt. She and her family traveled to Washington Court House two days later to pick up the newest addition to their swine barn. As part of the program, Braylee will exhibit her gilt in the Berkshire show during the Ohio State Fair then breed her to a purebred Berkshire boar. She will also donate one gilt from her first litter in 2022 to the donor program to fulfill another young person’s dream of starting a Berkshire herd. Braylee would like to thank the Ohio Berkshire Association for sponsoring this program. She is excited to expand her herd with “Hazel” in the coming year.