June 4, 2021 Between the Rows Archive, Top Headlines Leave a comment

Once we get a day or two of drying to recover from this 6 tenths of rain, then I suppose it will be time to start applying nitrogen to this corn. If it gets 90 degrees, this stuff is really going to take off.

I know it is a typical farmer thing, complaining that we either don’t get enough rain or too much rain, but boy I would have taken an inch all day long because we could have more than handled it. Everything I have seen so far seems to be coming up extremely well. It was good we did not get a pounding rain because some of this crop that is still trying to come up is not crusted in. It was a slow and steady rain that didn’t hurt anything and everything looks great.

The wheat is really looking good. I would say maybe in the mid-20s of June it could be about ready to come off. It looks right on par with wheat in years past and we are hoping for some good yields. We plant wheat for the sake of the straw and the double-crop beans more than anything, and it adds a nice bit of diversity to a field or two every couple of years.

In the past 5 years there was maybe only 1 year when we didn’t cut the double-crop beans, and there have been several years where we have had double-crop beans out yield some first crop beans. Maybe beans planted in the middle of July aren’t too shabby after all.

Since I was the one who did the corn planting, I’m the one who now has to decipher all of my corn rows with the sidedressing. It works out really well with RTK on the tractor. I can drive right back down the row and it is easy to find.

In the next two weeks dad will jump back in the sprayer. We have finally gotten enough rain to activate the atrazine out here and start to kill some of these weeds.

We have had it pretty wet the last couple of weeks. We finished up planting and last week we got an inch of rain. This week I am up to 4 inches in the last 2 days. North of me they did not get quite as much, but down south around College Corner I think we had 3 or 4 inches in about an hour yesterday. We had fields totally under water and there is a lot of flooding going on.

I’m the local fire chief and about the whole town College Corner flooded. We had a couple of families we had to get out with flooded basements.

Almost the whole town flooded. There was a lot of stuff shorting out, furnaces were ruined and a lot of propane tanks were laid over on their sides and floating away. We were shutting a lot gas valves off on propane tanks. We had a house with an elderly woman we carried out and she is going to a hotel room in Oxford for a while until we can get the house cleaned up.

One of the drawbacks with no-till and minimum-till beans is all the stalks we have on top of the ground. They are washing off and they were causing problems downtown yesterday. There are a lot of drains and culverts full of corn stalks right now.

There is a good bit of water getting away today but there is still water standing in some low ground. I think overall the corn will still be good, but I am concerned about some of the soybean fields. Beans can’t handle standing water very long. We may have to go in and do some replanting, but I am not sure when they will happen because it sounds like it is supposed to rain most of next week. We’ll just have to assess it and see what it’s like when it dries out.

Emergence was looking really good. The last corn we planted was spiking through in about 6 days. We had some uneven emergence with the early planted corn, but I’m still happy with the way it came up. Even the bean stands were looking pretty good, but we’ll have to see what this saturated ground will do to us in the next few days.

It was just a few weeks ago we were talking about how dry we were and how we were behind on rainfall for the year, and unfortunately we caught up in a short period of time.

We are really looking good. The weather has been almost perfect. Everything that has been in the ground for 10 or 12 days is up and looking really good. We are just coming off an inch of slow rain. With warm weather coming, things should really grow.

There were a few beans in the neighborhood that were stuck in hard dirt that should be able to get out now. We are starting to see people sidedressing and we have sidedressed a little of our own. The next 2 weeks will be really important to get out and do sidedressing because this corn is going to really take off. The stands are amazing. We couldn’t have asked for better emergence. Growing conditions are looking good and things are really going to move.

The weather forecast has 5 days in the 90s. This corn ought to really take off and our beans at home are getting close to start spraying Liberty on them. We were wanting some sunshine, which we have gotten.

I got up the other morning and I could smell the cover crop because it is starting to break down. We are very pleased with it. It is making the nice mat to save moisture and suppress weeds. I think if Mother Nature helps us here things will be really good.

I have seen a few corn fields where the grubs were working. I think we are passed that stage now and the plants have outgrown the problem. We have a few weeds here and there but I think overall the community has done a good job keeping fields clean.

This is a good time for prices. I hope everyone in my neighborhood has a really good year this year after what we came off of last year.

We got 7 tenths of an inch of rain. I don’t think we were starving for moisture, and we were pleased with that. We just finished planting corn 3 days ago and finished beans 2 days ago, as of now, though we might pick up a few more acres of beans. Now we are looking to get some hay made.

We had a few beans that might not have gone in deep enough that we ended up filling in a few spots, but very little. Especially with the warm temperatures coming and this moisture we just had, I don’t know what else we could do to get this crop up out of the ground. It is a pretty ideal situation right now and we are pleased with emergence.

We are finishing up our first cutting hay. We have some rougher ground we need to get mowed today and tomorrow and try to get it baled Monday and Tuesday if Mother Nature will allow it. Hopefully we can get some decent quality round bale hay for our heifers and dry cows made. We’d like to do second cutting haylage the second half of next week but right now it looks a little iffy weather wise. With the moisture we have had, things are looking pretty good for quality.

We put a fair amount of liquid N on the hay early in the spring and that gave things a boost. We feel like we have an abundant quantity. The quality side may be a little lower than what we would like.

Hopefully we’ll get hay done and get sidedressing corn here pretty directly. We do that with our John Deere 4730 sprayer with drop hoses on it. We put 40 to 50 gallons of 28% N on and some sulfur. When we get done with that we’ll get started with the second round of spraying beans.

We are hauling a fair amount of grain. The markets are pretty crazy right now. It is encouraging to have crop prices on the profitable side. 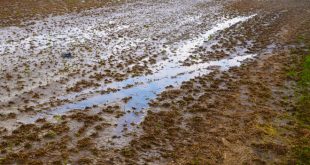 Between the Rows kicks off for 2022