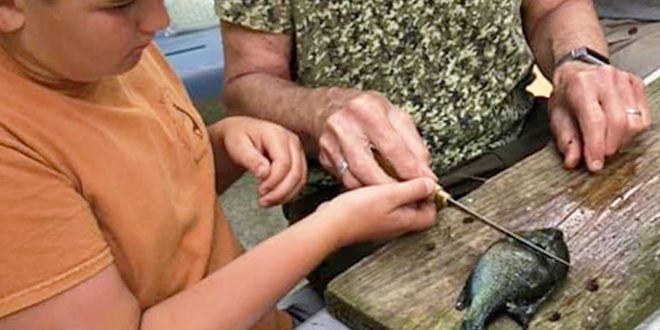 Fishing for bluegill: A classic for kids of all ages

When introducing a youngster to fishing, a mentor wants to find a body of water with easy access and an aggressive population of feeding fish. This is because there is no better way to get a kid turned on to fishing like some fast-action catching. And this is why many an experienced angler’s first and finest memories of fishing often involve the common bluegill.

With their deep blue/purple face and gill covers, dark-olive-colored lateral bands, and fiery orange-yellow underbelly, bluegill are colorful, beautiful fish to catch. Fishermen admiringly marvel about the power of this undersized dynamo, which is pound-for-pound one of the strongest freshwater fish, the old adage being “if they were the size of a bass, you couldn’t catch ‘em.”

Averaging only 6 to 10 inches at maturity, the bluegill is exceptionally strong for its size and has a bold character. The deep, slab-sided fish is all-muscle and is an aggressive feeder and protector of nests. For these reasons, they put up an exciting fight for fishermen young and old and can be relied upon for some quick-hitting action, especially during the late spring and early summer, when the fish cluster together in shallow water to make and defend their spawning beds. Having a youngster cast their bait along the spawn beds at the right time of the year will almost assure him or her fishing success.

Tom Edgerton, of Lima, is teaching his young children, Max and Maeve, to fish on the 5-acre pond behind his home. Originally from Mississippi, Edgerton has fond recollections of panfishing with his friends and family down South and enjoys passing the fishing tradition on to his own kids.

“Back home everybody called bluegill ‘bream’ and we called crappie ‘white perch.’ They provided what seemed like endless fishing opportunities as a kid. We would catch a bunch of fish and then take them home for a fish fry. We caught them using cane poles and bobbers and crickets, but you can’t find crickets as much around here. In Mississippi, most bait shops would have crickets,” Edgerton said.

Edgerton’s pond, which is loaded with bluegill, has the perfect set up for turning youngsters on to fishing. Along Edgerton’s property is a sandy beach and well-established gravel bed, which are perfect spawning grounds for bluegill. Additionally, a concrete retaining wall along the shore on one section of the pond puts shore anglers right on top of, and with easy access to, the healthy spawning beds beneath.

“Being able to go out at pretty much anytime in the summer and have spawning bream in your backyard makes it simple to teach kids about fishing. There is both ease and excitement in watching a bobber and spawning bluegill provide abundant and constant action for kids. They are good-eating fish that fight hard for their size and give youngsters plenty of fun opportunities to catch fish,” Edgerton said.

Tom’s wife, Anne, also an avid and life-long fisherman, agrees, saying that “Catching bluegill is a great way for the kids to develop a love for fishing and the outdoors as they can independently bait, hook, and catch a fish without needing extended patience.”

Part of the appeal of bluegill fishing is that the fish can be pursued and caught in a multitude of ways. People fish for them using everything from cane poles, to light-action rods and reels, to fly rods. They can be caught on a vast variety of both artificial and live baits — they hit anything from spinners and poppers to trout worms, wax worms, crickets, grasshoppers, nightcrawlers, bread, and hot dogs.

After hauling in a pile of bream, a fish fry is in order. And eating their own catch fresh out of the water will surely please hungry young anglers proud of their bluegill slaying abilities. While fileting the small fish out can be time consuming and laborious, it is worth the effort, as bluegill are hands down one of the best eating freshwater fish in North America.

The technique for fileting bluegills is not so very much different from fileting a walleye or bass; however, it does require some more precision and attention to detail if one hopes to carve out healthy filets from the small body of this particular sunfish species. For this reason, it is recommended that a smaller, razor sharp filet knife be used to extract the meat from the fish. For those unfamiliar with the steps for processing fish, there are numerous online resources and Youtube links that provide both written and visual demonstrations for how to fillet out bluegill.

As the bluegill spawn heats up in late May and June in the Buckeye State, now is the time to take a child out in pursuit of some action-packed panfish adventures. Youth under 16 do not need a license to fish any Ohio waters, and licenses are not required for anyone fishing privately-owned farm ponds and lakes. With the exception of very few select watersheds, there is no daily limit on the number of bluegill that can be taken. There are big, healthy bream across the state, with the state record bluegill coming out of Salt Fork Lake on April 28, 1990, weighing 3.28 pounds and measuring 12.75 inches; for lucky anglers, the Fish Ohio Pin Program will reward any bluegill caught measuring 9 inches or more. 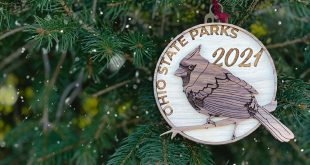 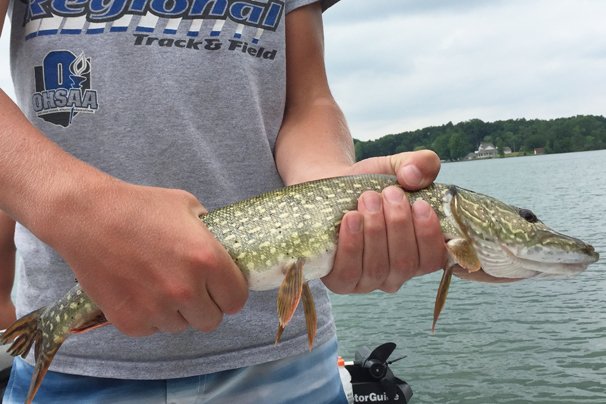 Muskies thrive thanks to stocking efforts 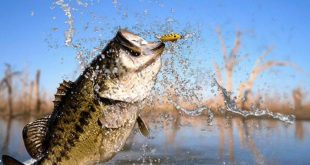