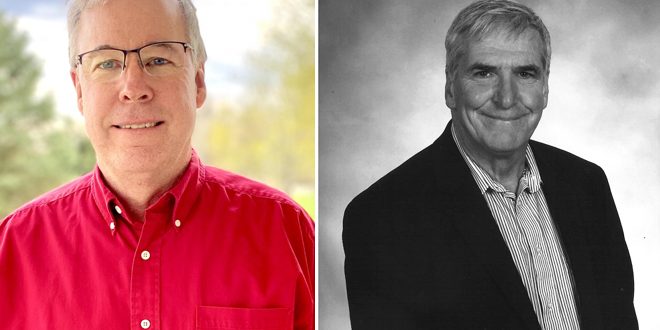 Roseler and Weiss inducted into Dairy Science Hall of Service

The Dairy Science Hall of Service was initiated in 1952 to recognize worthy men and women who have made a substantial and noteworthy contribution toward the improvement of the dairy industry of Ohio, elevated the stature of dairy farmers, or inspired students enrolled at the Ohio State University. The 2021 inductees were recognized in April at the Department of Animal Sciences “Celebration of Excellence” held virtually.

Dwight Roseler grew up in Wellington and has dedicated his career to assisting dairy farmers and those that work in the dairy industry. He graduated from The Ohio State University with his degree in dairy science in 1981. After graduation, Dwight worked as a field dairy nutritionist for local cooperatives in north central Ohio for seven years before continuing his education. Dwight earned a Master of Science degree in Ruminant Nutrition and Business Management in 1990 and a Ph.D. in 1994 in ruminant nutrition, both from Cornell University. After completing his graduate studies, he worked for a short stint in Indiana and then moved back to Ohio in 1996. For the past 25 years, Dwight has supported the Ohio dairy industry in his role as a Technical Dairy Specialist for Land O’ Lakes Purina Feed. In this role, he supports a dairy nutrition team of Purina employees and a much larger group of dairy nutritionists that work in the cooperative system in Ohio, Indiana, and Illinois. He has trained hundreds of future dairy specialists that work on with Ohio dairy farmers. Over the years, he has conducted many training sessions for producers to help improve their operations and participated in many programs for veterinarians. In addition, Dwight has served as the primary Dairy Nutritionist on numerous farms helping achieve success within their operation. In the past 3 years, Dwight has added the role of Dairy Tech Specialist for Bidco LLC in Kenya. In this role, he provides dairy technical training to a team that provides nutrition help to Kenyan dairy farmers. He was instrumental in the formation of the Midwest Chapter of the American Registry of Professional Animal Scientists, a professional organization for professional providing advice to dairy farmers. Dwight also is an adjunct faculty member in the Department of Animal Sciences at Ohio States. Over the years, he has participated in many Extension program, served on the Board of Directors for the Tri-State Dairy Nutrition Conference, served as a speaker in courses and seminars for undergraduate and graduate students, and supported the research for several OSU faculty. Dwight resides in Wooster, Ohio with his wife Vickie. Their four children are grown and have started families of their own. Dwight is passionate about the dairy industry and is dedicated to seeing dairymen everywhere succeed.

“Dwight is a passionate and tireless contributor to all segments of the Ohio dairy industry,” wrote one of the nominators. The recognition provided as a recipient of the Dairy Hall of Service acknowledges Dwight for his commitment to the advancement of the dairy industry by supporting dairy farmers, nutrition advisors, veterinarians, students, and researchers in countless endeavors.

William (Bill) P. Weiss
​​​​​​Dr. Bill Weiss, Professor in the Department of Animal Sciences at The Ohio State University, retired in January, 2021 after 33 years of being on the faculty. He grew up in Indiana and received his BS (1980) and MS (1981; dairy nutrition) degrees from Purdue University. Then, he enrolled in the graduate program at Ohio State in dairy nutrition and completed his PhD in 1985. He was a postdoctoral researcher at Ohio State prior to being on the faculty at North Dakota State University from April 1986 through December 1987, after which he returned to Ohio State as an assistant professor. Bill’s passion for the dairy industry started as a young man while working on a neighbor’s dairy farm. He is one of the rare faculty members who is equally an expert when walking on a dairy farm as when speaking, teaching, or writing. Throughout his career, his research has focused on forage utilization, energy values of feeds, feed management, and vitamin and mineral requirements. He has served as major professor to 29 MS and 5 PhD students, and served as a committee member to an additional 18 MS and 26 PhD graduate students. Bill has authored or co-authored 11 book chapters, 142 peer-reviewed articles, 102 abstracts, and 270 papers for an applied audience. His papers have been cited over 7500 times; moreover, he has 20 papers that have been cited over 50 times, particularly documenting his renowned expertise in energy, vitamin E, and selenium nutrition.

He has delivered over 216 national and 103 international presentations. He spoke at the first Tri-State Dairy Nutrition Conference in 1992 and has been a speaker at 22 of the 29 annual conferences, contributing to its growth from a regional to a national and international conference. The American Dairy Science Association (ADSA) recognized Dr. Weiss in April, 2019 for authoring or co-authoring 100 or more papers in the Journal of Dairy Science. He has received many awards based on national and international excellence, including three research awards from ADSA culminating in the fourth as a Fellow in 2015. In addition, he received both the junior and senior distinguished researcher awards granted annually by the Ohio Agricultural Research and Development Center at Ohio State. He has co-taught graduate level courses and served as guest lecturer in many undergraduate and veterinary student courses. He served as interim Department Chair for one year during 2016-2017. Bill developed a world-renown research program, but he never lost sight of sharing his research with local stakeholders, whether that be farmers, nutrition advisors, or veterinarians. The recognition provided as a recipient of the Dairy Hall of Service acknowledges Bill’s commitment to the advancement of the dairy industry by supporting dairy farmers, nutrition advisors, veterinarians, students, and researchers in countless endeavors.