In 2019, Belmont County Farm Bureau exceeded its $40,000 goal and the monies received were spent to package meals for school backpack program. The funds are enough to provide meals for two years at the current need level.

The power of farmers to unite a community

By Rick McNary, vice president of Strategic Partnerships for The Outreach Program

I didn’t think they could do it, but they proved me wrong.

I was so sure the Belmont County Farm Bureau would not hit their goal of packaging 22,222 bags of meals for their school’s Backpack Program, that I was already scheduling a truck to pick up the unused ingredients. But I underestimated the power of one man with a vision and the power of farmers to unite a community to care for its own.

I have spent more than 10 years engaging volunteers across America in meal-packaging events, so I know what it takes to raise money and to organize hundreds of volunteers. Therefore, when Devin Cain told me their fund-raising goal of $43,000 and the short window of time to raise the money, I was skeptical. But the real kicker was when he told me they weren’t going to have volunteer registration. That meant that he was banking on the goodness of hundreds of people in the community to arrive, unscheduled, to assemble a semi-load of ingredients into small, quart-sized bags.

I had never heard of anything like that. Every other organization that hosts packaging events have very detailed schedules of who, when and how many volunteers will participate. At these events, we form packaging lines by placing two, eight-foot tables end-to-end, then placing tubs of dry ingredients, equipment and supplies necessary for the ten volunteers around the line to package our mac and cheese, cinnamon apple oatmeal or any of our 10 varieties of meals. On one end of the table, we place the tubs with dry ingredients and volunteers scoop that into a funnel that has a person holding a bag below. That bag is moved down the assembly line, weighed, sealed, and, once 36 bags are completed, they are stacked into a box.

In order to accomplish Devin’s goal, we would fill a gymnasium with 20 of those lines and need 200 people an hour for a minimum of 4 hours to hit the goal. Rather than having volunteers pre-register for shift times, they just issued a general, “We’ll start around 2 p.m. and package until it’s done.”

Now, you understand my skepticism. They would need at least 600 people to accomplish their goal and the only people he knew, for certain, would arrive was his family and folks from the Farm Bureau office. He had approximately 20 people he could count on; the rest he just hoped would arrive.

I first met Devin Cain at a National Farm Bureau Convention in New Orleans where he joined us in packaging meals. He quizzed me about what it took to make it happen then told me what he wanted to do back at his home.

“My wife, Allie, and I went to New Orleans for the Farm Bureau convention and packaged meals with The Outreach Program,” Devin said. “We got the information we needed to take back to our board and presented them with the idea along with each of the seven meals that were available so we could taste-test them ourselves.

“Then, I called around to the schools to learn about their backpack program and what they needed to fill the backpacks for a two-year period. Then, we started writing letters and making phone calls to businesses and others that we thought might help us out.”

Madyson Little was an intern at the Belmont County Farm Bureau that summer working on her degree in community leadership.

“When I joined, they were already in the middle of raising the money,” Little said. “I was in the office and taking phone calls. It made me realize the power of one individual with a vision to unite a community. It took a lot of people to make this happen, but it would not have happened without Devin. It was a real-life case study of community leadership that I could not have learned in the classroom.”

Little too wondered, though, how it all would work.

“As excited as we all got, we were nervous, too. We kept asking, ‘What happens if no one shows up, what will we do?’ Devin always calmly replied, ‘We’ll figure it out.’ Somehow, people knew that we would,’ she said. “It was another leadership lesson for me about how important it is for a leader to be humble, yet confident. We figured if he wasn’t worried about it, then neither should we.”

I arrived before the event to unload the semi-truck filled with ingredients and equipment. We off-loaded 24 pallets of ingredients, equipment and supplies, then stacked them at the end of the gymnasium where the event would be held the following day. As we did, I wondered how many of them we would have to send back if not enough people arrived to help with packaging. I was apprehensive and let Devin know of my contingency plan to send things back. Unflappable, he assured me it would not be necessary to send things back; plenty of people would arrive to help.

When we book events with organizations, we seldom, if ever, encourage “come-and-go” events. Once a group sets their goal for the number of meals they want to package, the time frame they have to package and the space where the event will take place, we help them calculate the number of packaging lines they’ll need plus the number of volunteers. We calculate everything based on one packaging line with 10 volunteers producing 2,000 meals per hour. If they were going to package 120,000 meals, they would need 20 lines filled with 200 volunteers (40,000 meals pers hour) to run for three hours. They would need a total of 600 volunteer hours. Remember, he had about 20 people he knew, for certain, would be there.

The time arrived for the event to begin and the parking lot began to fill with people arriving to package. Over the course of the rest of that day and spilling into Sunday, the community did just exactly what Devin expected of them; they came together to take care of their own.

One participant that day was a local banker, Denise Pens.

“I never expected that many people to be there nor did I expect I would work so long,” Denise said. “I kept thinking, ‘Oh, I’ll only stay a few more minutes,’ but then it was so enjoyable to work with so many people from the community for such a good cause that I just wanted to stay. I ended up working 7 hours that day; everyone was so pleasant and caring. I would hear children beg their parents to stay for another shift; it’s like no one wanted to leave.

“Devin and his family do so much for the community. As soon as they knew Devin was a part of this, they wanted to help because that’s what the Cain family does; they help. I feel forever grateful for the opportunity to have had the opportunity to help people I might never see, especially the kids in our community. This event brought everyone close and showed them that, when in doubt, the community will come together to help those in need, especially the children.”

Two-years later, Devin Cain and the Belmont County Farm Bureau are ready to do it again. I have no doubts this time about their ability to draw the community together, again, to take care of their children. Each meal costs about $2 to package and donations for 2021 will be accepted until June 15. The first big packing event for the program will take place at the Rock Gymnasium in Barnesville on June 26. Those who would like to donate or volunteer can call (740) 425-3681. Checks can be made out to: Belmont County Farm Bureau, 100 Colonel Drive, Barnesville, Ohio 43713.

I’ve spent the last 20 years working on domestic and global hunger issues by providing short-term relief solutions (give a man a fish) and long-term development solutions (teach a man to fish). I have come to the conclusion that any efforts to end hunger must begin with the farmers and the agricultural community. In addition to farmers providing food to feed the world, there is one particular element of farmers that I have observed that I’m not sure they understand; they, alone, have the power to unite a community unlike anyone else.

Currently, only 2% of the U.S. population are farmers compared to the 98% which are not. When our country was founded 250 years ago, those numbers were reversed.

The shift has created a disconnect between the public and the people who grow their food. However, the pandemic of 2020 created a heightened awareness for consumers as they sought out local farmers to buy their food directly. In fact, recent polls show that consumer confidence in farmers is at an all-time high.

Gathering hundreds of volunteers together and motivating them to spend several hours of hard work is not an easy task, yet Devin Cain and the Belmont County Farm Bureau proved that the power of farmers to unite people around food has been baked into their DNA in all the history of humanity. There is nothing that unites us more than a feast centered around food whether it is for ourselves, or for those in need.

In a time when we seek for leaders to unite a community, a state and a nation, perhaps we should look first for a farmer. They know how to use food to find a way to our hearts. 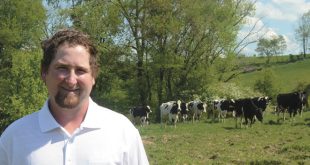 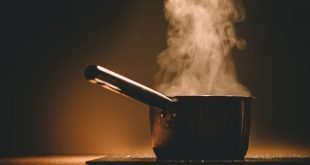