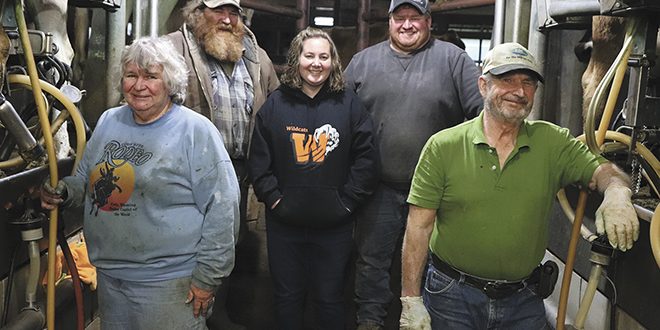 The Bohl family has been milking cows for generations on their land and they have concerns about the massive solar development going in just north of their farm in Highland County. Donald “Dick” and Kay Bohl now work on the farm milking 220 Jerseys with their sons Kelly (back left) and Dusty (back right) and Dusty’s wife Amy. Photo by Tonya Alexander.

Farm to cheese process highlights a love of dairy

For anyone who has met the Bohl family, it is readily apparent that they love their Jersey cows. And now, thanks to a unique partnership with Urban Stead Cheese, a growing population of Cincinnati and the surrounding region loves Bohl’s Jerseys as well.

Donald “Dick” and Kay Bohl now work on the farm milking 220 Jerseys with their sons Kelly and Dusty and Dusty’s wife Amy. The family has farmed their land in southern Highland County for three generations and dairy is a way of life.

“I have been raising cattle and showing cattle for most of my life,” said Dusty Bohl. “We have a free stall barn with fresh bedding every other day with straw. Pens are scraped twice a day. We follow Ohio Department of Agriculture regulations and we are inspected every 5 to 6 months. We raise corn, beans and hay to feed the cows. We also bring in hay from Nebraska to get the right quality and quantity. In southern Ohio it is hard to grow enough alfalfa for what we need. We raise all of our corn silage. We raise enough corn for ground corn too. We feed dry beet pulp, wet brewer’s grain coming from the warehouse up the road in Trenton, Ohio and our supplements come from Cargill. In that supplement is distiller’s grain and soybean meal.”

The stable and consistent diet and conditions for the cattle are important for consistent milk quality and production.

“We have a confinement operation. Our cows are fed a constant diet, which I feel for cheese making is important because the milk is consistent from day-to-day,” Bohl said.

When Scott and Andrea Siefring-Robbins were looking for a milk supply for their new Urban Stead Cheese production facility and retail tasting room in Cincinnati they had several requirements.

“We had a handful of priorities for our milk. We wanted a good location. We could not drive too far. Flexibility is really valuable to us. For example, next week we are not going to take milk because of a holiday. If we were under contract to take a set amount of milk, it’s possible there are times we would have to buy it and dump it,” said Andrea Siefring-Robbins. “Jersey cows were also very attractive to us because of the ratio of fat to protein in the milk. As that ratio changes it changes the cheese. It takes about 100 pounds of milk for us to make 16 pounds of cheddar. We also make Quark, which is a higher moisture cheese and we get to 26% yields in the winter and 23% in the summer. The fats and the proteins interacting is really the key to cheesemaking and you get a much better ratio with Jersey milk. With Holsteinmilk you get a much lower ratio. We really notice a difference with Jersey milk and it makes a better cheese.”

Construction of Urban Stead was under way and the time they were planning to start production was drawing near, but the Robbins still had not found a milk supplier.

“We were full steam ahead with building and we still didn’t have a milk source. It was scary. We engaged the Ohio Department of Agriculture early in the process to share with them our plans. We worked with the inspectors and we put a bug in their ear about looking for Jersey milk,” Robbins said. “Eric Shaefer with ODA hooked us up with an area milk plant inspector, Ron Fenton with Scioto Milk Producers Cooperative. He identified the Bohls.”

Along with the milk, the overall standards of the farm also needed to mesh with the philosophies of Urban Stead Cheese. After an initial visit to the farm, Scott and Andrea were convinced they’d found the right fit with Bohl’s Jerseys.

“We went for a visit and it felt like I was going to my grandma’s. I remember being in the milking parlor when I was a kid, though she had Holsteins. It felt like going to the farms I was familiar with,” she said. “From a farm perspective there were no surprises.”

There still were some logistical issues, however. Compared to the overall production of Bohl’s Jerseys, Urban Stead Cheese uses a relatively small, and sometimes inconsistent amount of milk. The Urban Stead cheese vat holds 3,000 pounds of milk and they operate in those increments, typically getting 9,000 pounds at a time. After a COVID-19 related slowdown in business, Urban Stead is ramping back up to using 27,000 pounds of milk a month.

Regulations dictate that milk cannot be removed from the farm bulk tank and have fresh milk added to it without sanitizing the tank in between. The Bohl’s fortunately have two bulk tanks on the farm and the capacity to fill them accordingly to accommodate Urban Stead’s needs and the regular milk truck for their Scioto Milk Producers Cooperative.

Urban Stead has a mini-milk truck and trailer and Scott and Andrea are licensed to haul and sample milk for use in their cheese making process. They make the roughly 45 mile-trip to Bohl’s Jerseys on Sundays to get their milk for the following week.

Knowing the hard work and great care the Bohl’s put into their dairy operation, Andrea said getting the milk was fairly intimidating the first few times.

“Operating and trying to do a milk run with all of those people there watching was pretty intense. Are these guys going to trust us to do this? My goal is to always leave things better at their farm than we found them and for them to not even know we were there. There is clear responsibility on our shoulders when we are getting milk,” she said. “Scott milked growing up so he had a little more understanding of the process, but there was a lot to learn the first few times.”

On the farm side, the Bohls had to make a few adjustments initially, but have gotten a good system set up.

“With two bulk tanks, we really have not had to change that much, other than the timing of the milk pick-ups,” Bohl said. “For the most part, [Scott and Andrea] take care of everything. We tried to be around when they first started to make sure everything was getting done the way it needed to be done — cooling and sanitizing is a big thing. Since we do produce a lot more milk then they use, we are working with our regular milk truck driver and we do have two different bulk tanks on the farm which makes it a lot easier to follow ODA and health department regulations. We have to scale everything to their benefit and the truck driver’s benefit. We make sure we have enough milk in the one tank for Urban Stead when the regular milk truck driver is going to be there.”

The Bohls have also needed welcome the fact that, though they always have been watched, their relationship with Urban Stead is bringing a new level of urban customer attention regarding their farm operation.

“With showing cattle for so long, I am pretty used to some of these questions and scrutiny from people who may not always recognize what the farm community is,” Bohl said. “The common thing people do not realize is the husbandry of the animals on the farm. If you harm the animal they are not going to produce. We take care of our animals and it shows.”

With local milk going direct to cheese and customers in a trendy venue, a unique opportunity to showcase the hard work of dairy farmers has emerged and been embraced by both Bohl’s Jerseys and Urban Stead Cheese.

“We wouldn’t be working with Bohl’s Jerseys if they didn’t do what they did. It is a pride point for us. I walk in the barn every time we pick up milk and those curious Jerseys are there looking at me. We see the notes in the barn about cows where they are communicating with their team.  We see this family caring for the cows with their feed, their husbandry and you can tell they really care about their animals. That is really important to us. We operate transparently. If there was anything we had to hide in this process, we couldn’t do this. Their high quality of care is important. We want to feel good about our partnership with them,” Robbins said. “We get a lot of questions about where our milk comes from. We have all heard stories about dairy farms not doing things properly and our customers ask a lot of questions about the cows. We talk about the fact that it is a third generation dairy farm and how we see them every time we go to their farm. It gives us a nice platform to talk about farmers who are doing their best to take care of their animals and be good stewards of the land and the dairy industry. We talk about how no one will benefit from cows that are not thriving.”

For their first anniversary, Urban Stead brought a real cow into their parking lot for the day (not one of the Bohl’s Jerseys). Seeing a cow right there helped customers further solidify the connection with food and farms.

“Let me tell you how many people here had never seen a live cow in person,” Robbins said. “The dairy industry is really difficult. We are able to make the cheese we make because of the Bohls, and, of course, their cows. We have a lot of respect for that and we share that with our customers.” 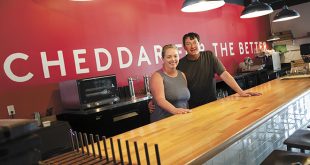