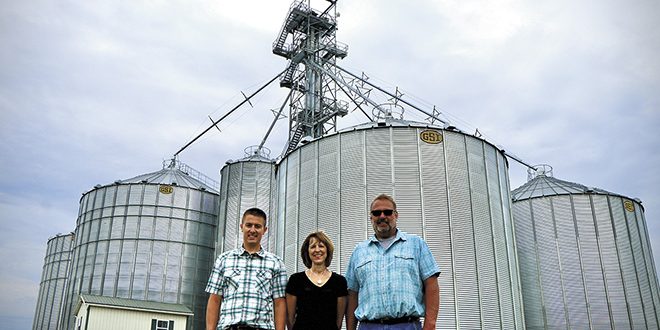 John Wilson (right) is pictured with his wife Christina and their son Jakob, who are co-partners in the farming operation.

When JCW Farms decided to install a new grain system in London, the objectives were threefold:  to gain more storage capacity, improve efficiency and allow for future expansion.

JCW Farms is a 5,000-acre family farming operation based in nearby Plain City, about 24 miles northwest of Columbus. The new grain system was opened in 2016 to supplement and eventually replace the operation’s older grain storage facilities.

“We needed more capacity and wanted to eliminate some of our older facilities so we could consolidate and be more efficient,” said John Wilson, a co-partner of JCW Farms along with his wife, Christina, and son, Jakob.

“Our new grain site is mainly intended to dry and store corn, with the ability to also handle soybean overflow from our old system,” Wilson said.

An important part of the system design was to have an infrastructure in place that would facilitate future expansion. That work began the following season, in 2017, when a new 70,000-bushel bin was added and, in 2019, when another 150,000-bushel bin was installed.

The London site, which Wilson nicknamed “Iron Mountain,” now has a total grain storage capacity of 650,000 bushels — nearly quadruple that of the older system — to support the farm yield goals.

“It’s all about harvestability,” he said. “We can harvest when we want. We’re not sitting or waiting at the elevator. We can control what and when we run. Efficiency is the big word.”

“They’re the best and great to work with — especially Dusty Hubbard, who put in a lot of extra effort,” he said.