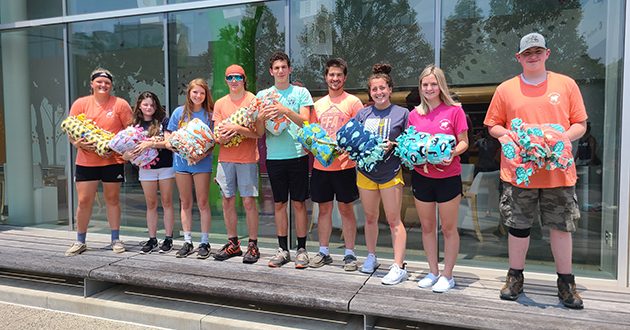 Members of the newly elected ZT FFA Officer team enjoyed their summer retreat on Tuesday, July 6th. To kick off the day students learned how to build their professional networks and develop successful habits from David Glass of the Pickaway Progress Partnership.  David is a former President of the ZT FFA Chapter and he enjoyed the opportunity to visit with the current members of the officer team.

Next, students discussed the importance of building trust and being a positive ambassador for Zane Trace from a familiar face—Principal Ty Wertman.  Students reflected on issues such as conflict resolution and community expectations with Mr. Wertman and came away from his presentation with a better understanding of their roles and responsibilities.

The officers then set to work on building the FFA Chapter’s Program of Activities for the coming year and prioritizing the events that will take place in each month. Students discussed bringing back several chapter activities that were cancelled last year due to the pandemic including the Pumpkin Show Parade Float, CDE competition trips, National FFA Convention and hosting a full Chapter banquet in the spring. It was exciting for them to return to a fuller FFA calendar!

After a quick lunch the officer team headed to Columbus where their first stop was Nationwide Children’s Hospital. There they donated 24 fleece no-sew blankets that had been made this spring by chapter members using funds from the Sausage Breakfast. From there the students traveled to Vertical Adventures where they learned the basics of rock climbing and worked together as a team to conquer the 50 foot tall walls inside the climbing gym!

The officers enjoyed a quick dinner of ethnic dishes at Whole Foods Market before their final adventure for the day—an escape room challenge in Grandview Heights.  At the escape room the students worked against the clock to solve puzzles and unlock clues to escape a mock police raid on a 1930’s era speakeasy. They were successful (thanks to 5 minutes of bonus time!) and learned a great deal about working under pressure.

The officers are grateful to everyone who visited them during their retreat and helped make their day of learning, leading and serving possible.

Lessons learned from the 2021 growing season