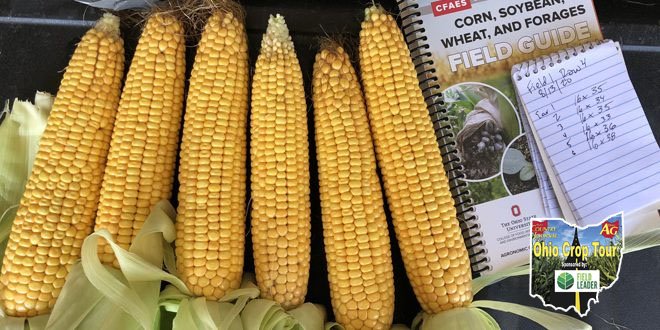 Corn: The corn had a good green color with no disease pressure on the upper canopy. The fill to the tip was getting small kernels due to dry weather. This is a nice looking field with a 33,000 population and a 185-bushel yield.

Soybean: The beans were green and looked nice. These were the tallest beans of the day at 39 inches. The distance between nodes was 2.5 inches with very low amounts of frogeye present. There was a little leaf feeding. There were 2-3 beans per pod and most were in groups of 2-3 pods per cluster. These were 50 to 60 bushel beans.

Corn: There was a nice green color in this field and the corn looked really healthy. The disease pressure was light with tiny lesions of gray leaf spot far down in the canopy. We couldn’t find any insects. The tip back was between a half inch and an inch. We had an average yield of 211 bushels in a population 34,000. It was a nice uniform stand. There was some weed pressure in this field.

Soybean: There was quite a bit of height variability here with some SDS pressure and 2.5 inches between nodes. There were 1-2 pods per node and 2-3 beans pods. The yield is likely 40-50 bushels.

Corn: This 20-inch corn was extremely healthy with very little disease. It had been treated with fungicide. There was plenty of moisture here. This is the best corn we have been in with a yield of 270 bushels. One ear was 20×35 in a population of 39,000 plants.

Soybean: There was more prevalent SDS in this area that was consistent in some parts of the field. It was a 38-inch canopy with 4 plants per foot of row in 20-inch rows. There was 2.5 to 3 inches between nodes with no insect pressure. There were 4-5 pods per node and 3-4 seeds per pod in this 60+-bushel field.

Corn: The plants looked healthy but the soil is dry. This is the driest stop so far. There was no disease pressure or insect damage. There was some tipping back on the ears. The yield was 163 bushels. This was a nice consistent stand.

Soybeans: The beans were only 15 inches tall and just blooming. This looked like a replant situation. They were showing heat and moisture stress in very dry conditions. There was some insect feeding and some frogeye in the lower canopy. On average there was 3-inch node spacing and 4-6 plants per foot. If this weather keeps going these will be 30-bushel beans if they’re lucky.

Corn: It is nice, leafy corn with a stand of 29,000. It is getting dry here and the ground is firm. There were numerous small gray leaf lesions on the leaves but nothing that would hurt yield. The ears were tipped back about a half inch. The yield was variable but averaged out to be 179 bushels.

Soybean: The general conditions were very good. There were some cracks in the ground. The canopy height was 29 inches and the distance between the nodes was 2.5 inches. We did see some downy mildew and a little bean leaf beetle feeding. There were 2-3 beans per pod and 1-3 beans per node in the 40- to 50-bushel beans.

Corn: This was healthy green corn. There was gray leaf spot and no insect pressure. There appeared to be some hail damage. There was a 1-inch nose on some of the ears with an average yield of 189 bushels. The corn had adequate nitrogen and plants looked good.

Soybeans: There was some water damage. This was a good green field with pods that were filling out nicely. There were a few aborted pods at the bottom of the plants with a 36-inch canopy and 2-inch node spacing. There were some small frogeye lesions just starting to develop on the leaves and just a little bit of insect feeding in the 40- to 50-bushel field.

Corn: This was a green healthy field with good soil moisture. The disease pressure was light and there was no insect pressure. One of the ears had some tip back and there was some smut out there. The yield checks were variable but averaged out at a solid 201 bushels.

Soybeans: They were 40 inches tall and dark green. There was 2.5 inches between nodes and light disease pressure. There were a few aphids in this field. There was 40- to 50-bushel yield potential.

Corn: The general condition of the corn is good, but soils are dryer than fields in other areas. There is low disease and insect pressure, with just a little gray leaf spot. The ears are nosed back a bit and the average yield was 170-bushels.

Soybean: The canopy was at 38 inches in 20-inch rows with 4-6 plants per foot. The distance between nodes was 3 inches. There was not much disease pressure but some leaf feeding by Japanese beetles. These were nice beans with 50- to 60-bushel yield potential if they can get some rain.

Corn: There was some gray leaf spot but the hybrid appeared to be resistant and lesions were not big, many just spots. The field looked really good with a little nitrogen deficiency showing up. Some of the ears were tipped back. Yield counts were very strong though with a 223-bushel average yield. This field has had no moisture stress. It was planted mid-April. The field was wet and muddy.

Soybean: There was a bit of yellowing on these early-planted beans. The canopy height was about 39 inches. The nodes were 3 inches between the pods. There was some light frogeye and a little downy mildew starting. There has been some leaf feeding. It looks like a 40- to 50-bushel field.

Corn: The field looked nice and ears were good with little to no disease or insect pressure. There was some light bird damage. Ears were filled within less than an inch of the tip. The average yield was 198 bushels.

Soybean: The beans were extremely healthy with 3-4 plants per foot. The canopy was 39 inches with 2.5-inch node spacing. There was some brown spot low in the canopy and occasional signs of SDS. There were two bean leaf beetles found by scouts, but insect feeding was low overall in the 50- to 60-bushel beans.

Corn: The corn was green with no insect pressure. The ears were filled to the tip with average kernel depth. There was an average yield of 147 bushels in this field with quite a bit of giant ragweed pressure. There was well above an economic level of northern corn leaf blight with at least 7 or 8 lesions on the ear leaf.

Soybean: They looked good from the road. They were lodging and 39 inches tall. The nodes were 4 inches apart. There was a little frogeye and some brown spot. There was a little bit of bean leaf beetle activity. There seemed to be a lot of pods with 2-3 beans per pod. These looked like 40 to 50 bushel beans. It looked like there were some singulation issues due to spacing problems in the stand.

Corn: There was some grey leaf spot as high as the ear leaf, which had a couple of lesions. There were some missing kernels and it was still pollinating. There was some tip-back. The plants were green and healthy in this low stress field with excellent potential and a yield estimate of 191 bushels.

Soybeans: The canopy height was 41 inches in 15-inch rows with 7 to 8 plants per foot and two inches between nodes. There were a few lesions of frogeye and some sudden death syndrome showing up on a plant here and there. The population was 150,000 and the field was planted April 24. The was some bean leaf beetle feeding and 50- to 60-bushel yield potential.

Delaware County The 10th stop of the North Leg of the Ohio Crop Tour, Sponsored …