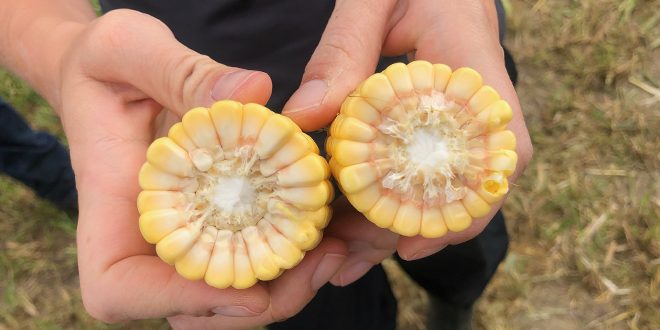 The benefits of late-season scouting

By Roy A. Ulrich, Dekalb and Asgrow Technical Agronomist in Southern Ohio

Many of the crops in the state are advanced enough in their growth stages, that no further management decisions or applications will impact yield, except for harvest timing decisions. However, much of the final yield is still to be determined by the previous management decisions and the weather over the coming weeks. Just because our management influence has ceased for this growing season, it doesn’t mean that scouting can’t positively impact future growing seasons.

Nitrogen management is one of the things that late season scouting can help determine, if making any changes to next year’s nitrogen program should be considered. The tell-tale yellowing of the lower leaves starting at the tip of the leaf angling in towards the mid rib, is an indication of a corn plant remobilizing nitrogen from lower in the plant towards the ear for grain fill. If nitrogen deficiency is found in a field, a little detective work is needed to determine if corrective action is needed for future growing seasons. The initial reaction to seeing nitrogen deficiency is to increase rates which may be the correct recourse, however, consider the weather since application. If the growing season has been extremely wet or extremely dry, then the rate applied may have been adequate, but the nitrogen may have been lost due to denitrification or may not have been able to be pulled into the plant due to a lack of adequate moisture.

Based on the number of aerial applications that I have seen occurring across the countryside in late July and early August, corn foliar diseases have been a hot topic of management. Scouting fields that have been sprayed with a fungicide or not, will indicate not only the efficacy of the application, if one was made, but also the overall disease tolerance of a specific corn product. High levels of foliar diseases progressing above the ear leaf in the mid to late grain fill stages indicate a loss of leaf area that may have negatively impacted yield and therefore implementation of a fungicide or changing to a corn product with better foliar disease tolerance may improve yield.

Scouting for corn insects late in the season, specifically with yellow sticky traps for corn rootworm beetles, may have become a technique of the past. However, some areas of the state are starting to see a resurgence of corn rootworm even in some fields following soybeans. Once considered a billion-dollar pest in U.S. corn production, corn rootworms have been extremely low in Ohio over the past decade and some growers have forgotten their impact. Corn rootworm beetles in a corn field in late August means that the females are present and laying eggs in the soil for the 2022 growing season.

Scouting soybeans late in the season is a good way to improve future soybean crops as well. Late season plant lodging can be an indication of final plant populations that are too excessive for that soybean product on that specific soil type. If plant lodging is occurring, taking a stand count at that location will help determine what final plant stands should be for future growing seasons. Soybean seeding rates are one of the most common questions I receive from growers and many are reluctant to reduce them from their current rates. Doing some late season scouting can help determine final plant stands, if lodging is occurring, and if rates can easily be reduced by soil type.

Scouting soybeans late season for insects should be focused on those insects that feed on pods, specifically bean leaf beetles and stink bugs. Even though damage from these pests one season does not predicate a field to problems in the future, it is an important piece of information to help determine if enough damage is occurring to warrant treating.

Many management decisions were made over 2021 growing season and many of them will be evaluated with a yield monitor and a profit calculator as they rightfully should. However, looking at the crop currently in the field to let it guide and influence future management decisions can help you hone-in your decisions with more data and information from your specific fields versus relying on outside data that may or may not have the same impact on your operation.