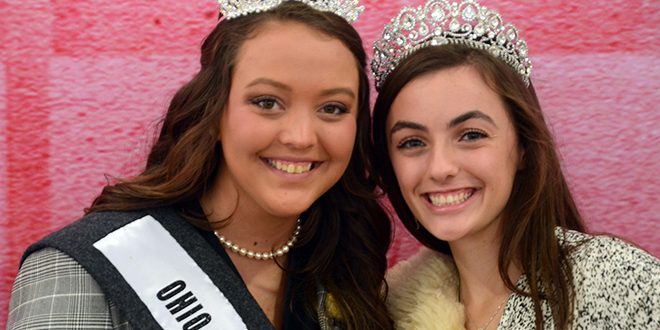 In 2019, the long-standing Ohio Lamb and Wool Queen program transitioned to the Ohio Lamb and Wool Ambassador Program. The position now includes a scholarship and helps a young person develop their leadership skills as a spokesperson for the state’s sheep industry.

The first ever Ohio Wool Queen, Elaine Leightey, was crowned in 1955 at the Ohio State Fair by Jane Lausche, the wife of the Governor. She then was off on a whirlwind of events, duties and appearances. She sold pelts in the Wool Room at the Ohio State Fair, did media interviews and appeared in daily parades. Though she did not hand out awards like her more modern counterparts, the fame of Leightey’s new role did allow her to rub elbows with celebrities including Neil Armstrong, two Ohio governors and even Phil Donahue.

“During the Fair, I stayed in an apartment in the Brown Sheep Building. Everyone was so nice and they made me feel special. A lot of people took my picture,” Leightey said in an interview in 2011. “I was escorted by police, with their sirens going, to an interview with the Channel 10 News. I showed Southdowns but I didn’t dare mention that in the interview because I represented all breeds.”

“With COVID, we added another year so I could come back to the Ohio State Fair and represent the industry as the ambassador for the shows. My year was different than in the past but I still got to go to some fairs, I got to judge some competitions, and I got to go to the Ohio Make it with Wool Contest. I feel like I had the same experience as any other queen in the past, but I got a little bit of extra time. I am really thankful for everyone who has helped me along the way and especially the Ohio Sheep Improvement Association for guiding me,” Preston said. “Guys or girls can run for this now that we do have it as an ambassador position. There is opportunity here and this is a scholarship position so they can get some college money. If you have the opportunity, definitely apply.”

Olivia Rinesmith from Madison County did just that and was selected as the first Ohio Lamb and Wool Ambassador. She raises crossbred market lambs for her FFA CDE. She has also been a long-time participant in sheep lead line competitions.

“I competed in lead line since I was around 5 or 6 years old. It is where you model a wool outfit while you show a lamb. It is kind of like the pretty side of the show. It is one of my favorite things and another way to represent what sheep can be used for,” Rinesmith said. “I am really honored to be the first ambassador in 2021. I am excited to be in the shows. The past year and a half has been a little bumpy and I’m glad I get to see all of these exhibitors and all of their hard work and dedication within the shows. Without them, we wouldn’t have a fair. I’m also excited to go out and represent the sheep and the wool industries and make sure everyone knows about the great industry I have a love for. I’m looking forward to making connections and being the person everyone can come to with questions, whether you are a little girl seeing a crown and sash wanting to take a picture or adults in the industry so I can gain knowledge and advocate for the great industry we are in.”