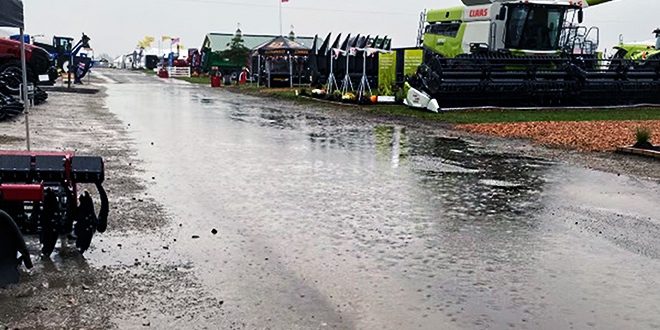 A deluge of rain might have shortened this year’s Farm Science Review by a day, but the show still drew a strong crowd to see the latest farm techniques and technology.

Farmers have to contend with sudden shifts in the weather. So do outdoor farm shows.

Predictions of constant rainfall and powerful wind gusts that toppled some show tents and signs led to the show’s closure on the second day of what’s typically a three-day event. On the other two days, Sept. 21 and Sept. 23, a crowd persevered through wind and intermittent rain for a total turnout of 70,850 people.

“There have been so many events canceled in the last 18 months that people were really happy to be outside at a large event with others,” said Nick Zachrich, manager of FSR.

“The first day I saw people out in the rain without jackets on, and they all had smiles on their faces.”

With so many shortages in raw materials and machinery, the show gave visitors a chance to see what is available to them for their businesses, Zachrich said.

“In my experience working with farmers, they are always looking for the best. Something new. Something that works. Something that increases yields,” said Ohio Gov. Mike DeWine, who attended the first day of FSR along with The Ohio State University President Kristina M. Johnson and Cathann A. Kress, Ohio State vice president for agricultural administration and dean of the College of Food, Agricultural, and Environmental Sciences (CFAES).

“Farmers are always out there looking,” DeWine said, “and Farm Science Review answers that.”

Visitors to this year’s show could learn about topics including the profit potential in carbon markets, reducing energy costs on the farm, weeds that can poison livestock, and one of the timelier issues, farming in the rain and other difficult weather conditions.

“We’re having wetter springs and wetter falls and are trending toward drier summers in some parts of the Midwest,” said Aaron Wilson, climate specialist for CFAES, which hosts FSR. “That makes farming much more challenging.”

But, Wilson offered FSR attendees an optimistic outlook on weather in the coming weeks. Temperatures are expected to be above average and drier than normal and October, overall, is typically light on rain, he said.

“It does look like a favorable harvest season. But it’s going to take us a few days to dry out after the last two days’ deluge,” he said.

While his fields in Kenton were drying out Thursday, Austin Heil took a break from farming to be at FSR. He’s been to the show most years from the time he was about 6.

“It’s one of the very few opportunities that we get as growers to meet with company representatives. It’s very much a two-way street,” Heil said. “We have to have those connections and those relationships built so we can have clear communication with the industry.”

And it’s helping the next generation in the agricultural industry, he said.

“It’s a prime opportunity to find out about jobs in the future,” he said. “And the industry needs to be receptive to our next generation. We are the ones who are going to mentor them.”

Next year’s FSR, Sept. 20–22, will be sure to offer a new lineup of practical and entertaining offerings. 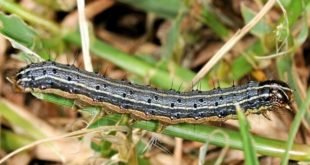