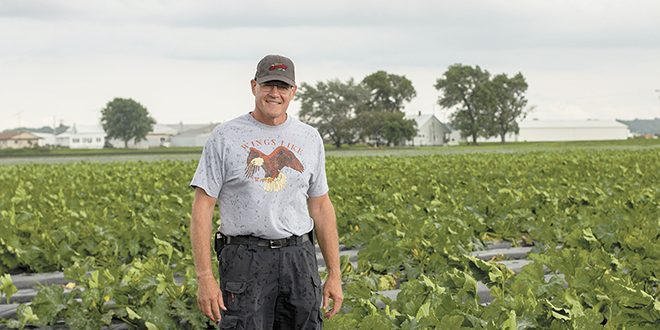 Ken Holthouse and his family are working hard to get the most from their muck soils while conserving it.

The contrast between the bright, green leaves of a zucchini plant is stark in comparison to the black soil. Heat rises from the field, at least a few degrees warmer than the hot summer air. Rumor has it that the soil itself, when dry enough, can be lit on fire. The ground, known as muck, is dark and rich in nutrients and very valuable for specialty crop production in parts of northern Ohio.

The area, which has been coined “the muck” by locals, is located just south of Willard, Ohio. The unincorporated area where more than 1,000 acres of the soil is located is called Celeryville, named after the many fields of celery that once dominated the area.

In the mid-1890s, a gentleman named Henry Johnson realized that the Willard Marsh had soil ideal for growing vegetable crops. However, he needed help to drain the area. A group of Dutch immigrants, who were used to draining fields and building dikes in the Netherlands to farm, had recently settled near Kalamazoo, Mich. Johnson went to Michigan and struck a deal with a group of families, who relocated to Celeryville and drained nearly half the Willard Marsh to turn it into vegetable production.

Today, three of the original families still live in and produce vegetables in the area in the rich muck ground. The Ohio State University also developed a research station in the area in 1948.

“Farming on muck ground is almost like farming in a compost pile,” said Bob Filbrun, manager of the Ohio State Muck Crops Agricultural Research Station. “It’s so good for vegetables because the ground is so fertile. The muck is peat moss that has undergone a lot of decomposition. Plus, it heats up really quickly which means the growing season can start earlier.”

In comparison to other soils, which may have organic matter in the 1% to 3% range, the muck ground around the research station has levels of anywhere between 28% to 30% organic matter. Some levels reach as high as 50%.

“Nitrogen is readily available in the soil. Plus, it holds a high degree of moisture, so even in a dry year, if the roots are down far enough, the plant gets enough water,” Filbrun said.
The research station has completed trials in a range of different areas, including food safety, pest management, weed management, disease management and variety trials.
“Currently, we have 26 trials that have either been completed or are being conducted still. The bulk of them have been on weeds and weed management,” Filbrun said. “We also have some variety trials looking at red beets and parsley right now.”

Other recent areas of study include trials on managing carrot weevils and pepper weevils, as well as downy mildew, which affects several types of vegetables. The USDA also conducts research at the station, particularly with the IR-4 project, which looks for expanded labeling of pesticide uses for specialty crops.

“Many of our trials originate from the growers in the area. They all face similar problems and issues, then they come to us and our researchers to find solutions that will work on their farms,” Filbrun said. “The researcher will create a plan and treatment option, then they hand it on to me and my team to put into action. The research station operates very similarly to any of the other farms around here.”

Holthouse Farms is one of the specialty crop growers still located in the muck today. Founded in 1903, the farm grows, packs and ships between 30 to 35 different types of vegetable crops. What they don’t grow on the farm, they work with a network of specialty crop growers to package and distribute high-quality produce to their customers.

“We work with the OARDC and with Ohio State University Extension for pesticide recommendations and for diagnostic tools,” said Ken Holthouse, one of the four owners. “Being able to access their plant pathologists has been huge for us growers, as well.”

Today, Holthouse Farms is owned by brothers Ken and Steve Holthouse, and brothers Kirk and Kevin Holthouse, the third generation in the business.

“We all have the same background, we were born and raised in this business,” Ken said. “For more than 20 years now, the cousins have been busy growing and expanding the business. In 2003, we purchased Doug Walcher Farms in North Fairfield, Ohio. We grow and package a lot of our summer fruiting vegetables, like peppers, cucumbers, summer squash, zucchini and more, at that location.”

Ken’s primary job is to manage the sister company.

“Our customer base is about 50/50 retail and foodservice. Having a diversified customer base is important in order to get all the product sold,” Ken said. “For example, a pepper that might not be ideally shaped may not work great for a grocery store. But for a restaurant that will cut it up and use it in a salsa, it’s perfect.”

“We try to sell produce year-round. We usually sell product we grow from June through November, and then from November through May we source in product,” Kirk said. “We aim to purchase high quality products, and we do see every single piece of produce before it gets distributed to customers. We can grade the vegetables ourselves and ensure all the orders are right.”

Food safety has been a major priority for the Holthouses. In order to preserve food quality and food safety, the loading dock was refrigerated.

“When product comes in from fields, we use hydrocooling to chill that product before it goes to the loading dock,” Kirk said. “By refrigerating our loading dock, the product gets cold and will remain cold until it gets to its final destination.”

“It’s a lot different from when we were kids, when we kept all the produce outside,” he said.

Like many other companies, Holthouse Farms had to be nimble when the pandemic hit in 2020.

“We were getting calls from drivers bringing produce from Mexico and from the west coast on their way to the east coast when everything shut down. We offered to take some of that produce from them, even though we weren’t sure at the time what to do with it,” Ken said. “Then someone had the idea to go to Facebook and to start selling produce boxes to the public, which took off like crazy.”

Customers masked up and sanitized before coming inside to choose the produce they wanted, or they could place an order online, which was delivered directly to their vehicle.

“The USDA Farmers to Food Boxes program, which purchased vegetables for food banks and families in need, also helped out a ton of specialty crop growers to get produce sold and moved,” Ken said.

Luckily, the labor shortage this year has not affected Holthouse Farms, aided by the H-2A program.

“We are sure glad we have H-2A workers this year. They work very hard,” Ken said.

The next generation of Holthouses recently came on board, with Kirk’s sons and Ken’s son joining the family business.

“The goal would be to eventually transition the farm and see it go on in the family,” Ken said.

While the future of Holthouse Farms looks bright, the future of the ground where Holthouses began their business over a century ago is, well, a bit “mucky.” The soil is highly prone to erosion.

“A lot of figures are thrown out, but a fairly safe estimate is that a quarter of an inch of muck is lost each year due to erosion and decomposition,” Filbrun said. “The growers have been planting fall cover crops on fields to prevent wind erosion in the fall and winter. They’ve gotten more selective about when they work ground, as well.”

Sustainability is a priority to Ken Holthouse and his fellow farming neighbors, who he describes as “cooperative competitors” in a concerted effort of soil conservation. 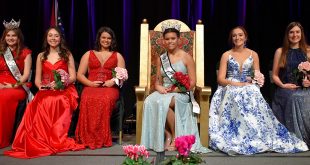