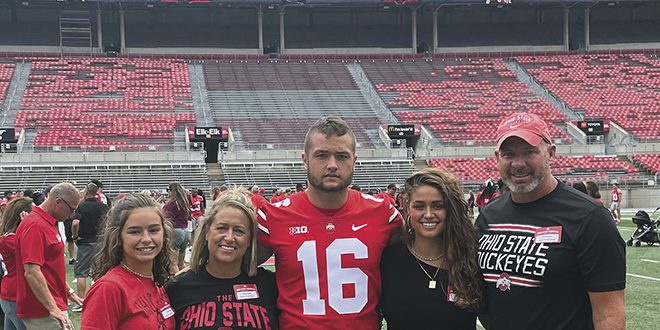 No days off: Stover puts in work to prepare for football and the farm

The field is where Cade Stover feels the most at home — not just on the football field, donning his No. 16 Ohio State jersey, but also the hay field, and in the driver’s seat of a tractor. Stover may be known for his athletic career, but his farming background is what sets him apart.

The 6-foot 4-inch 255-pound tight end is poised for big things this season (and this weekend against Oregon) for the Buckeyes. In 2020 he moved into the role from the linebacker position. He also played a key role on special teams. He made three tackles in 2020, including two against Michigan State, and also forced a fumble. Stover played in four games as a true freshman for the Buckeyes in 2019 and redshirted.

Stover made an impression on the coaching staff with his work ethic this summer, which will hopefully translate into more playing time in 2021.

“Cade (Stover) was recognized as an Iron Buckeye here, which is huge,” head coach Ryan Day told 247sports.com. “We had a bunch of guys who did, but it was significant that he did because he had a really good summer. I know this: When you’re an Iron Buckeye around here, you’ve got a chance to make an impact because if you’re doing that for 11 weeks with Coach Mick something good is happening.”

Growing up on his family farm in Mansfield, farming and sports are all Stover has ever known. His passion for both is genetic. His dad, Trevor Stover, played college football at Bowling Green State University before pursuing his farming dream.

“My dad is the one who started our farm,” Stover said. “He started with just a couple acres and two Angus cows. He worked really hard to get to where we are today.”

Now the farm calves anywhere between 80 to 100 cows a year and grows hay, corn, and soybeans. Trevor is also is part owner of an excavating company with his brother. Stover’s mom, Chelsi, and two sisters, Gabby and Tatum, are huge help on the farm as well.

“Dad would work long hours at the excavating company, then he would come home and work more. We ate dinner as a family every night, but right after dinner dad was fixing something or working on something,” Stover said. “I learned most of what I know about fixing equipment by holding the flashlight for him.

“In high school, my family owned two butcher shops, Stover Custom Meats, one in Mansfield and one in Powell. We sold our beef there, as well as other meats, cheeses, sausages, stuff like that.”

While the butcher shops closed in early 2020, the family still sells freezer beef to local families.

“We try to have at least one steer going to the butcher shop a week,” Stover said.

When he wasn’t helping his dad on the farm growing up, Stover was playing sports. The Lexington High School graduate was a stand-out athlete in multiple sports.

Named Mr. Football in 2018, Stover contributed over 200 points to the Lexington Minutemen football team in his four years of high school, in addition to 592 tackles, four sacks, eight interceptions and over 2,000 rushing yards. Stover was also instrumental to the basketball team, graduating with the school’s record for scoring and rebounding. He played in more varsity games than any other athlete in the program’s history.

Yet, he’s humble. Sure, he loves sports, but it’s clear that Stover is a farmer first before anything else.

“I have to give all the credit for my sports career to farming,” Stover said. “All the credit for who I am today has to go to the way I was raised. I watched a lot of friends hang out on the weekends, but on the farm it was just me and dad making hay, weaning calves, and working in the pasture on the weekends. Prioritizing working hard like that just makes you appreciate things more.”

Stover draws other parallels between playing college football and farming. Mental toughness is just as important as learning to work hard.

“The mental aspect of farming and football are similar. I made a comparison to Jeremy Ruckert, another tight end, at the end of football camp. I told him that day felt like we had just unloaded four loads of hay in the mow, thinking we were about done, but then found out we had five more to unload,” Stover said. “Of course he didn’t quite get what I was saying, but he understood the feeling. It was a hot, long day. Both farming and football require a constant grind, and a high level of responsibility. Always having something to do on the farm helped get me ready for the weight room and football world.”

When asked what his favorite thing about being on the Ohio State University football team is, Stover laughed and said, “how close it is to my house.”

Stover did consider other college programs and teams before committing as a Buckeye, but the opportunity to see family and be involved on the farm was too hard to pass up.

“I love that I can run home in my free time and see my mom and help on the farm. I love that I can meet my grandparents for dinner during the week,” Stover said. “Ohio State has one of the best football programs in the country and it’s right in my backyard.”

Of course, there’s plenty more Stover loves about being a Buckeye. His teammates and coaches are huge impacts on his life.
“When you sign to be a Buckeye, you’re signing into a program that really wants to develop you,” Stover said. “They want to get you ready for that next level of play. The coaches are second to none. My teammates are just a great group of guys.”

Stover is one of just a handful of agricultural majors on the team, focusing his degree on agricultural systems management. His teammates have enjoyed learning more about farming.

“My teammates love it. Everybody wants to come up and look at the farm,” Stover said. “It’s a way of life they didn’t even know existed. We put a couple of them to work, doing some chores a few times.”

Recently, the NCAA created a new policy that allowed college athletes to become sponsored by businesses. Athletes can now monetize their name, image and likeness. Stover just announced his new partnership with Rocky Boots, known for their rugged work, military and outdoor boots. The company is based in Nelsonville, Ohio.

“I’m excited about it. I think the new policy is great,” Stover said. “We put in more hours than you could possibly think of at the facility. It’s nice to finally make a profit off of the names we have created for ourselves.”

Stover has dreams to play in the NFL, but sees the career as a way to set up his farm for success. While the sport is definitely important to him, he’s known farming was his calling in life.

“My goal is to grow our farm. I really like the crop aspect of it, so definitely want to farm more acres and raise my future family there,” Stover said. “I want to take football as far as it will take me. But I always have known I want to be a farmer more than anything. Some players want to make money and buy a big house or a fancy car, I just want to be able to buy a big tractor and a farm.”