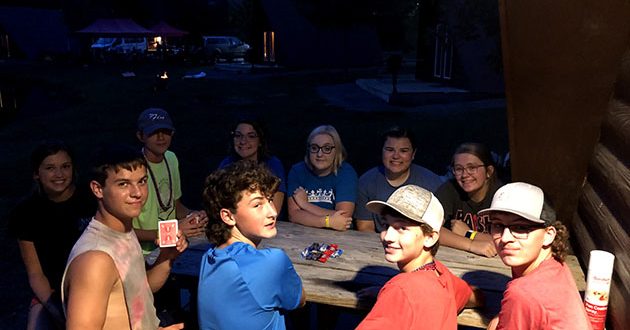 Each year the Northwestern FFA holds an officer retreat to welcome their new officers. This allows them to bond with the past officers and plan the year out together prior to the school year starting. This year’s officer retreat was a three day event packed full of the officer team bonding and getting to know each other, planning the school year out, and having fun to start the year off!
Day one started with all of the officers meeting up and preparing for Adopt A Highway. Each year the officer team picks up garbage on State Route 302. Officers split into two groups with one advisor in each group, all of the trash is picked up and put into garbage bags. Following our Adopt A Highway activity, the officers began to prepare for the year, starting with personal goals. After personal goals were set a team activity took place. The team activity broke officers into three groups. These three groups were the people in charge of cooking breakfast, lunch, and dinner for the next day. After each group decided what meal they wanted to cook for everyone, the officers loaded up and headed to the grocery store. Each group shopped and picked out all of the ingredients needed to complete their meal.
The officer team headed to Mohican Adventures where they would spend the next two nights in ‘Camper Cabins.’ The chapter was able to rent three ‘Camper Cabins’ where the girls slept in one, the boys slept in one, and the advisors slept in the other. Officers got settled into their cabins and then enjoyed dinner at Trails End where officers were able to sit and bond with other officers. The day ended with campfire pies and card games. Everyone was ready for a good night’s rest to prepare for day two!
Rise and shine! Day two started with a group of officers cooking breakfast over the fire. After breakfast officers cleaned up and were ready to start a productive work session. During this work session Point of Actions for each committee were written out, leaders for each committee were established, fundraisers were discussed, spirit wear contest was discussed, and planning the year began. Following the productive work session, the second group of students began to cook lunch over the fire. It was now time for some fun! Due to the weather, canoeing was not an option but that did not stop the officers from having a blast. Each officer was able to participate in go karting and play a round of putt putt. Then everyone enjoyed some ice cream before the last group prepared to cook dinner. While the last group prepared dinner the rest of the officer team prepared for one last work session. This work session consisted of stating goals, strengths, and weaknesses for this year. Each year the officer team makes a list of goals they want to achieve, weaknesses they want to work on, and strengths that are noticeable. These are hung in the classroom to remind students daily what we need to work on for our chapter.
After two very productive days, the officer team was headed home. Officers woke up early in the morning to pack and head back to the school. Everyone enjoyed breakfast at McDonalds before driving home. When arriving at the school, officers helped put everything back to where it belongs and prepare for a productive school year. The officer team was very fortunate to be able to hold a regular officer retreat after a few years of not being able to. The officer team is very excited to have a successful year full of all of the things that are planned and help engage our members more in the chapter! Thank you to everyone who made this trip possible!
Hanna WilsonReporter 2021-2022Northwestern-Wayne FFA ChapterNorthwestern High School7473 North Elyria RoadWest Salem, Ohio 44287(419) 846-3833