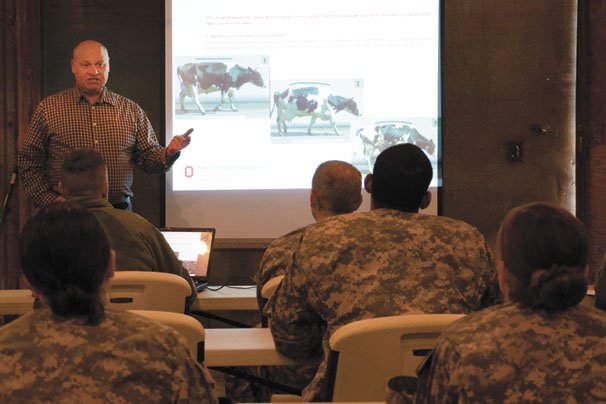 For Steve Boyles, Ohio State University (OSU) beef cattle extension specialist, it’s all about connecting with his students and providing visual, hands-on demonstrations and activities to help them be the best cattle handlers they can be.

Boyles is originally from Southeast Ohio, where his family ran a research facility for OSU. Growing up on the farm cultivated his love for beef cattle. Boyles pursued that interest, eventually becoming a leading expert in Beef Quality Assurance (BQA). He uses his knowledge and expertise to teach agriculture students, cattle producers, and consumers alike the importance of BQA.

“It’s not always the classic classroom lecture,” Boyles says. “I think people appreciate visual and hands-on opportunities. So that’s why I always get the audience to participate.”

To help with visual learning, Boyles obtained a grant in 2001 to have miniature corrals built. These make it easy to discuss corrals in a three-dimensional method where pieces can be moved around.

“Part of BQA is working cattle in corrals,” he said. “The corral kit is about showing how to make a cattle handling facility better with the existing resources.”

Typically, once Boyles has assembled the corral, he stands back and lets the producers indicate what needs to be changed and how it can be improved.

“A lot of what we relay just makes sense because the information is relatable to cattle producers, and producers take pride in doing things correctly,” Boyles said. “Today, there’s greater oversight and understanding from the producer on what consumers want, they value consumer input, and I think BQA has helped create that.”

Besides being an integral and beloved teacher, Boyles has contributed to the makeup and success of Ohio’s BQA program by serving in a leadership position since its inception in 1994. Under his and other agriculture industry leader’s guidance, Ohio’s BQA program resources have been adopted by other states and is the certification tool for the 5-State Beef Alliance (Ohio, Michigan, Illinois, Indiana and Kentucky). Throughout his years in BQA, Boyles has hosted many in-person BQA certification opportunities and events. From 2018 to 2020, 10,588 Ohio cattle producers received their BQA certification. In-person certifications represent 74% of those beef producers.

Personally, Boyles has contributed immensely to the cattle industry. He helped develop, with a national BQA pilot project resource grant, a nationally recognized program designed to train first responders to better manage traffic accidents involving cattle transportation vehicles. Bovine Emergency Response Plan (BERP) is an award-winning program and is in high demand due to a lack of basic knowledge among the nation’s first responders. Also, components of the BERP animal handling module have been used since 2017 in specialized training being provided for Special Operations Forces (SOF) combat medics from all U.S. military branches.

Ultimately what Boyles loves most is being involved in the cattle business.

“The whole environment, the lifestyle and the people I get to interact with — it’s a wonderful way to live,” he said.

The BQA Educator Award is funded in part by the Beef Checkoff. Beef Quality Assurance (BQA) is a nationally coordinated, state implemented program funded by the Beef Checkoff that provides U.S. beef producers guidelines and certification drawn from common sense husbandry techniques and accepted scientific knowledge on how to raise cattle under optimum management and environmental conditions. BQA reflects a positive public image and instills consumer confidence in the beef industry. When producers implement the best management practices of a BQA program, they assure their cattle are the best they can be. For more information on BQA, visit www.bqa.org.