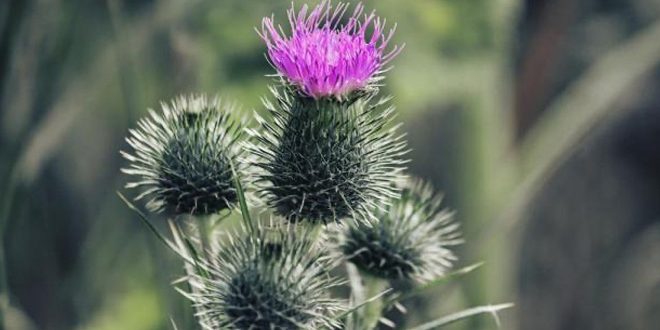 Weeds often tell a story about how a farm is managed.  Most weeds grow really well in soils low in calcium with low humus.  Often potassium and/or magnesium levels are high, but not always. Many weeds act as collectors of minerals that are deficient in the soil.  When weeds die, they often improve the mineral nutrition of the soil.  If farmers can understand what the weeds are telling them, they can change their management to

Two problem weeds are giant foxtail and Canada thistle.  Both these weeds thrive in soils that are highly saturated, poorly drained, have low porosity, and have low humus. These soils have low oxygen levels and contain anaerobic bacteria which are generally harmful to crop health.  Low calcium and phosphorus are common problems in these soils. For Canada thistle, copper is also often low. Thistle roots can grow 20 feet deep and are a perennial plant, so they are trying to add humus and get oxygen deep into the soil.  Foxtail roots have shallow fibrous that are trying to move oxygen into the soil surface. Since these soil tend to be so tight, most micronutrients are in excess supply but since most plant roots can not grow in water-logged soils, the micronutrients are either not plant available or leach away.

Most broadleaf weeds like a soil environment where potash or potassium exceeds available phosphorus.

Marestail and waterhemp thrives where potassium and magnesium levels are very high but calcium and phosphorus are very low.  Both these weeds produce high volumes of weed seed but the weed seed generally only survives 1-3 years.  Both weeds do not like a lot of competition, so they grow on bare soils that are anaerobic (lack oxygen), have low soil humus, and are compacted or have poor soil structure.  Water hemp grows better on poorly drained soils that are saturated while marestail like soils that have good drainage.  Planting rye or radish as a cover crop in the fall reduces both these weeds due to the production of natural herbicides which reduce germination of small seeded weeds and due to competition for nutrients and water.

Soils that have jimsonweed, velvet leaf, curly dock, and smartweed tend to have many soil problems.  These weeds germinate in soils where the crop residue is fermenting.  Often these soils smell bad.  Velvet leaf needs methane to germinate and jimson needs ethane gas which is even worse.  Soil with high populations of these weeds have low calcium and phosphorus but are high in potassium and magnesium with abundant micronutrients (iron, sulfur, boron, zinc, copper).  Unfortunately, most of these nutrients are not plant available due to low soil porosity, excess water, poor drainage and a lack of oxygen. Quack grass is similar except it thrives in soils that are high in phosphorus.

In the spring, dandelion and purple dead nettle or henbit are common weeds.  Dandelion thrives on soil low in calcium but high in potassium and boron.  Its deep roots help to bring calcium to the surface.  Henbit grows best in low calcium soils.  Both weeds grow best where low humus, low crop residue or bare soil exist.  These plants start growing in the fall and often are an early source of pollen to bees and beneficial insects, since they bloom so early.

When soil management and weed populations improve, lambsquarter will probably be one of the last weeds to disappear. As your soil improves, usually the weed species start to change.  Lambsquarter grows best where phosphorus levels are a little low and potassium and sulfur levels are higher. Ragweed like good drainage but it also likes highly fertile soils where all nutrients are highly plant available.

Adding lime (calcium carbonate) or gypsum (calcium sulphate) can help these soils become less tight and also improve many weed issues. Calcium is the element that causes soil particles to move apart and improves soil structure. Excess magnesium tends to make soils stick together.  Soils high in magnesium tend to dry up and crack during a dry summer.  Water in a dry soil is often tied to the magnesium element and is not plant available.  Tight soils prevent beneficial microbes and plant roots from obtaining enough oxygen for proper respiration, often ferment and smell bad, and do not allow the soil to breathe! Farmers also plant early and use dense crop canopies to control weeds. Adding cover crops in the fall and improving soil health is another good way to reduce weed populations by providing competition for light, water, and nutrients.