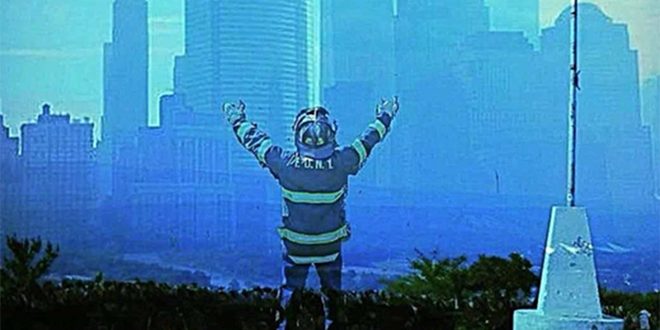 This is an image from the cover of Chris Edwards’ book “Coming through the flames: My life in the F.D.N.Y."

So, where were you when the world stopped turning that September day? That darkest of blue sky days 20 years ago forever changed the lives of Americans and, in many cases, inspired many in our great country to take positive individual action for the sake of others.

Chris Edwards was certainly inspired to action. Edwards is a retired New York City firefighter who served for 17 years as a member of E42 and E81 in the Bronx. Though Edwards was not officially on duty that day, he was a first responder during the tragedies that surrounded the Sept. 11, 2001 terrorist attack on the World Trade Center in Manhattan. He spent two weeks digging through the rubble of the World Trade Center following the attacks. Edwards has also served as a member of the Disaster Assistance Response Team that deploys during disasters to assist individuals, families and communities. He has traveled the country in recent years sharing stories from that terrible September day and the weeks that followed. On Sept. 11, 2021 Edwards was in Ohio speaking at Mount Vernon Nazarene University.

Despite the terrible things that transpired that day, Edwards’ message is one of hope. He talked about how horrific it was on Sept. 11, 2001 and also how incredible it was on Sept. 12, 2001.

“I tell everybody the bad was bad, but the good was the greatest that day and it will always be that way,” Edwards said. “When you think of the rescues that were made and the sacrifices, people that sacrificed their lives to save total strangers.”
Edwards talked about the lines of people waiting in line to give blood, the unification of our nation and the incredible heroism of many first responders in truly terrible circumstances. He talked about the amazing sacrifice of so many volunteering for military service and help pouring into Ground Zero from every corner of the country.

On Sept. 11, many tears were shed. On Sept. 12, many saw brighter days ahead. On Sept. 12, differences between political parties, races, religions, communities, geography, rural/urban, and neighbors seemed to fade away in the ghastly shadow of the black smoke floating through the blue sky.

Edwards continues to travel around the country to ensure neither the terror of Sept. 11, 2001 nor the hope of Sept. 12 are forgotten 20 years later. He saw the worst and the best of those days first hand and he hopes his message and efforts will help Americans to never forget them.

Former President George W. Bush spoke at the Flight 93 National Memorial in Sanksville, Pa. on Sept. 11, 2021, echoing the same sentiments of the amazing individual sacrifice stemming from the incredible tragedy. Bush highlighted the incredible heroism of the crew and passengers who lost their lives saving so many others.

“This is not mere nostalgia. This is the truest version of ourselves. It is what we have been. And what we can be again,” Bush said. “Twenty years ago terrorists chose a random group of Americans on a routine flight to be collateral damage in a spectacular act of terror. The 33 passengers and 7 crew of flight 93 could have been any group of citizens selected by fate. In a sense, they stood in for us all.

“The terrorists soon discovered that a random group of Americans is an exceptional group of people. Facing an impossible circumstance, they comforted their loved ones by phone, braced each other for action and defeated the designs of evil. These Americans were brave, strong and united in ways that shocked the terrorists, which should not surprise any of us. This is the nation we know. And whenever we need inspiration, we can look to the skies and remember. God bless.”

And, in case you have never read the transcript of the phone call of Todd Beamer from that flight — which serves as the subject of multiple books and films — it is worth remembering. After describing the situation in the plane and learning about the situation taking place outside of the plane, Beamer shared the plans of the passengers and crew to take on the hijackers. The software salesman and Sunday school teacher from New Jersey passed his love on to his family, prayed with the woman on the phone and ended the conversation with these words:

Are you guys ready?…

I know it is 20 years (and a few days) after all of this happened, but the spirit, lessons and unity from that day are as important today as they have ever been. We are in a divided country in a divided time, but — unless we are willing to forget the incredible unity and widespread spirit of individual sacrifice we knew to be true 20 years ago — those divisions are not bigger than Sept. 12, 2001.