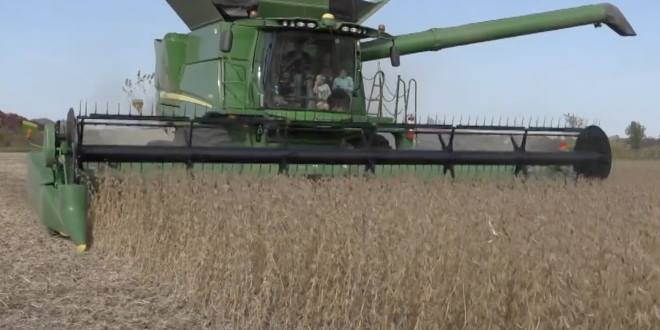 Across much of northern Ohio, the soybean crop is looking fairly strong as harvest gets going.

Brad Miller, a technical agronomist for Asgrow and DEKALB, is advising soybean growers to take note of the yields in their fields this fall and compare them with the challenges they identified in those fields earlier in the growing season.

“Across northern Ohio we were seeing both frogeye leaf spot and sudden death syndrome. Frogeye is usually more of a southern Ohio disease, but it has crept north. I have seen it as far north as Perrysburg up by Toledo. It was something we all needed to scout for this year and apply fungicide as needed,” Miller said. “Sudden death syndrome (SDS) is something we have seen more this year with all of the rainfall. It can often be correlated back to areas of the field that had some compaction from last fall. There is some correlation as well for areas with soybean cyst nematode (SCN). If you had SDS this year, I would look at sampling for SCN in those areas to make sure that is not the culprit. You can have SDS without SCN, but there is a high correlation there. As you think about next year’s management, each variety has varying levels of tolerance to SDS and frogeye. You can select higher tolerance varieties if you are finding those issues in your fields.”

A good weed management strategy was also important in 2021.

“I have seen soybean fields with pretty good weed control and others where weeds were more challenging. The fields where we had issues with giant ragweed and other weeds were often areas with a thinner soybean stand,” he said. “Waterhemp is still a big issue for weed control in soybeans. Overlapping residuals seems to work pretty well in soybean weed control programs. Use a residual program pre-emerge and come back and overlap that residual with a second residual herbicide application such as Warrant herbicide 14 to 21 days after emergence. It is always better to control weeds pre-emergent versus having to burn them down after they’re out the ground, especially with waterhemp as fast as it grows.

“Giant ragweed and marestail emerge early in the spring. If you have XtendFlex soybeans, spraying XtendiMax with VaporGrip Technology in your pre-emergence burndown application in no-till, or even in conventional-till using XtendiMax with your other residual herbicides in a pre-emergence application timing can provide good control of marestail and giant ragweed. In a dry spring, XtendiMax can provide up to 3 weeks residual control on broadleaf weeds.”

And, just as farmers are evaluating the successes in their own fields this year, Miller suggests they evaluate new varieties in plots around the state for next year.

“We have many brand new varieties in our Asgrow XtendFlex soybean plots around the state. Just in northern Ohio we have around 30 plots, and in each of those we have our new class of XtendFlex products represented. Yield is still king as far as the breeding and selection process,” he said. “I would encourage everyone to check out yield data as it comes off of those plots in different locations and see how the new XF2 class is performing versus XF0 and XF1 soybeans to see which products are consistently rising to the top.”

This article was contributed by Ohio’s Country Journal for Asgrow.