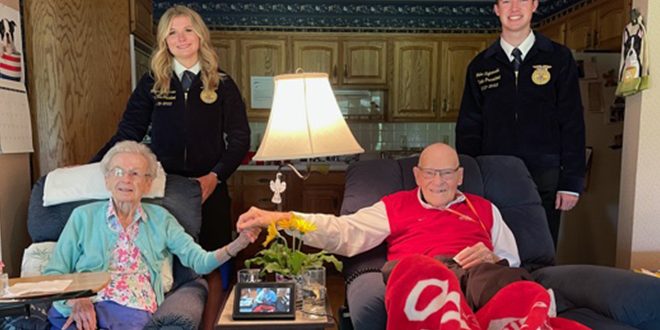 The Kantners on July 23, 2021, during a visit by the current state president and vice president at their home.

Earl F. Kantner, age 95, of Canal Winchester, Ohio passed away on Oct. 15, 2021 at home with his loving family by his side. Long time teacher and youth leader born April 24, 1926 on the family farm near Wapakoneta. Son of Charles I. and Blanche Dapper Kantner. WWII Veteran, served in South Pacific theater on Island of Okinawa with U.S. Army famed Seventh Army Infantry Division. Wounded in action June 17, 1945, the last battle of WWII. Youth Director of Ohio’s FFA youth for 21 years, 1963-1984.
Earl began his education in a one-room country school in 1932 at the age of six and graduated from The Ohio State University with a Bachelor of Science Degree in 1950. Taught High School Agricultural classes at Ansonia, Wauseon and Canal Winchester, Ohio High Schools. Joined the OSU faculty in 1958 and in 1963 was appointed Assistant State Supervisor of the Agricultural Education Services, Ohio Department of Education. Earned his Master of Science Degree in 1956 and his PhD in 1968 from Ohio State. Retired from the State Dept. of Education in 1992 after 44 years of service.
Earl received several commendations and awards for his dedicated service. Nationally, he was awarded the Distinguished Service Award from the National Association of Agricultural Education teachers. The National FFA Youth Organization named him to their National VIP Award and the National Vocational Association presented him with their Distinguished Service Citation. In Ohio he was enshrined into the Ohio Agricultural Hall of Fame in 1988. In 1995, received the Ohio State University’s Silver Anniversary Distinguished Alumni Award, the Ohio Farm Bureau’s Distinguished Service Award, Landmark’s Service Award and the Ohio Young Farmers Citation for Exceptional Service. He received a number of FFA awards and citations as well as the Fulton County Hall of Fame and Wapakoneta High School’s Distinguished Alumni Hall of Fame Awards.
He stayed active in his retirement years as long as health permitted. After retirement from the State Department, he served as State Director of the Ohio FFA Foundation where he spearheaded the conception and development of the Ohio FFA Center on the State Fairgrounds.
Locally, he stayed active in his church and military veteran’s activities, especially Veterans of Foreign Wars (VFW). He was a two year commander of Post 10523 and a former member of Lions Club. He was a loyal member of Faith United Methodist Church in Canal Winchester for over 60 years. A devoted husband, father and grandfather, his joys included family, career, church, golf and gardening and what he often said was his second career, the VFW Veterans organization. And, of course, he was an avid fan of The Ohio State Buckeyes.
Calling hours will be held Saturday, Oct. 23 from 10 am to 12 pm at the Dwayne R. Spence Funeral Home, 650 West Waterloo Street. The funeral service will follow at 1:30pm at the funeral home. Interment will be held at Franklin Hills Memory Gardens. Military services provided by Canal Winchester VFW Post 10523. In lieu of flowers those who wish may make memorial contributions to the Earl F. (Doc) Kantner student Scholarship, c/o The Ohio FFA Foundation, 717 A, E. 17th Avenue, Columbus, Ohio 43212 or Faith United Methodist Church, 30 W. Columbus St., Canal Winchester, Ohio 43110.