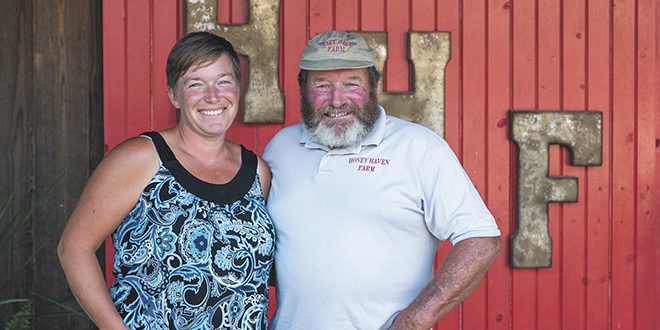 John Boyer and his daughter Lauren Smith enjoy working together on the family’s Honey Haven Farm in Ashland County.

It all began with a pumpkin patch. In 1999 John Boyer and his wife, Deb, opened their farm to the public so visitors could pick pumpkins. Boyer, at the time, was a dairymen, the fourth generation on the farm to milk cows and raise crops in Ashland County.

It was an economical decision to plant the 8 acres of pumpkins.

“Milking was on the downhill slide at the time. A neighbor was raising pumpkins and he was making a profit off of them. So I decided to give it a try,” Boyer said. “I had beginner’s luck. Every pumpkin was huge. We picked a truck load in 20 minutes, I took them to Mt. Hope and got $4 a pumpkin. The next night I asked for my family’s help to pick more pumpkins. Then the following night, I asked for more help. Then my sister suggested, what If I just let folks come pick their own pumpkin? So that’s how we got started.”

The farm started to get busier and Boyer kept expanding the entertainment options on the farm. Boyer realized he had stumbled upon a new business venture, and the decision was made to sell the cows. The milking herd was dispersed in 2003, giving Boyer more time and resources to put his focus on making Honey Haven a destination. They still have a small cow-calf beef operation and raise Percheron horses.

“I guess you could say I found my second love,” Boyer said. “The first year we were open, I had a lady and her four-year-old daughter come out and pick a pumpkin. When I went to help her put it in the car, I realized her teenage son was sitting inside. In that moment I recognized I needed something for older kids to do too.”

The next year Boyer designed a corn maze, a standing tradition now at Honey Haven Farm. Every year after, the farm has expanded on their agricultural activities and attractions. The marketplace followed, as well as a greenhouse. There is also a petting zoo, craft barns, horse-drawn wagon rides, special events and more. More than 20,000 guests visit the farm annually.

“We have a strong customer base in the fall,” Boyer said. “We are working on growing that base for our greenhouses and the farm market the rest of the year. We stopped our print advertising about five years ago, now we get most of our business through word of mouth or seeing us on social media.”

The Boyer family opens their greenhouse in the spring to sell plants, hanging baskets and flats.

“Mother’s Day is the Christmas of the flower season,” Boyer joked, noting that 2021’s greenhouse season was especially busy.

In addition to growing their own flowers, they also grow the majority of the produce they sell in the marketplace, which they opened in 2005.

Smith joins her father every day as the farm’s manager. They also have one other year-round employee who helps with the greenhouse and produce.

“We do our best to appeal to a lot of different people,” Boyer said. “Adding in the vendors really just does a nice job of rounding out the marketplace.”

The farm is also for rent for events. The farm has been the venue for many weddings over the years. Their pavilion is rented out for birthday parties, meetings, and more. Every year the farm organizes field trips from area elementary schools and visits from nursing homes.

Boyer enjoys visitors on his farm so much that he opened it up in the evenings to families who travel through the area. Boyer signed up to be a Harvest Host, a program that connects campers and RVers to farms, wineries, golf courses and other small businesses. The program encourages the guests to support the farm or business they visit, as well as check out other local attractions. Boyer gets guests from all over the country. Each visitor who stops gets some fresh produce, especially Boyer’s sweet corn, which gets rave reviews.

“Lots of people have told me that I have the best sweet corn they ever had,” Boyer said. “But I didn’t necessarily believe my sweet corn was the best, until a guy from Iowa came and stayed here one night. We gave him a couple ears of sweet corn for dinner. He said he’s never had sweet corn that good before. He was from Iowa and liked my sweet corn the best, I think that said something.”

Honey Haven Farm’s most popular event is the Fall Festival, which kicked off in late September and runs every weekend through October. One of the main attractions is the 10-acre corn maze.

“We still create our corn maze the old school way, by hand,” Smith said. “I remember sitting in math class thinking I would never use graph paper ever again. Well, here we are now, using it every fall to map the field.”

Last year’s corn maze featured a masked smiley face complete with the phrase “In this together 2020.”

“Every year we do something different and this design was definitely unique. The maze and fall festival were really popular last year,” Smith said. “We did the bare minimum with the festival and we still had a ton of visitors. It was an outdoor activity people could do fairly safely.”

The farm activities also include pumpkin slingshots and air corn cannons, a straw maze, and a farm animal zoo. With such diverse offerings, Honey Haven Farm is truly a family affair. In addition to Smith, Boyer’s two other daughters, grandchildren, brothers, sisters and other relatives help on the farm.

“Working every day with your family is the best thing about working here. Somedays, it can admittedly be the hardest too,” Smith said with a laugh. “It’s fun to work together and to hear stories.”

Smith’s own children have worked in various roles at the farm, either picking produce or working the cash register.

“I hope they’ve learned to work hard and to understand the value of family,” Smith said. “Family is the heart of our business. My sisters help in the spring with flower baskets. Various family members come and help pick sweet corn and tomatoes.  I joke that I made a farmer out of my daughter, Lauren.”

Those who visit Honey Haven Farm become part of the family. It’s Boyer’s personal mission to make sure everyone who visits the farm feels like more than just a customer. Customers get personal greetings from the owner himself and he enjoys sharing stories with visitors. Boyer takes pride in the fact that his farm has been interwoven into many families’ traditions.

“When you’re trying to grow and build your business, there’s some things you just don’t plan for,” Boyer said. “For me, I never planned to feel so much pride. When you see your family working together like that, it’s hard not to be proud.”

For more about Honey Have Farm, visit honeyhavenfarm.com.