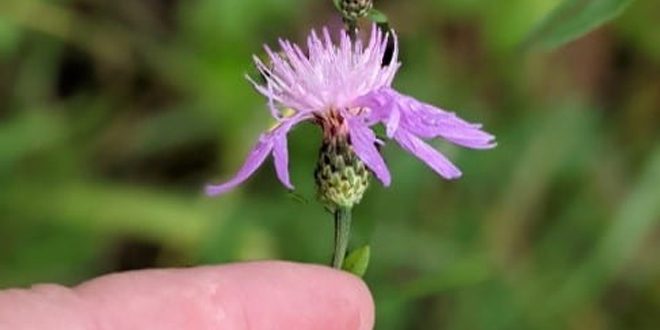 It is often said that, “Any plant in the wrong place is a weed.”

Well, in a pasture situation, there tend to be quite a few plants that weren’t intentionally planted there but thrive there regardless. It can be challenging to determine if these weeds are threatening or adding beneficial diversity to our pasture sward. Broadleaf weeds tend to be easier to identify and control than grassy weeds in a pasture setting, but can still be puzzling depending on lifecycle, growth stage, flower arrangement, and growth habit.

One that commonly confuses land managers in Southeast Ohio is spotted knapweed. Spotted knapweed is a detrimental weed that shares similarities to many less threatening pasture plants. The color of the flower is similar to that of red clover, the growth habit is similar to chicory, and the flower shape is similar to Canada thistle and ironweed. However, the combination of growth habit, color, and flower shape is unique to spotted knapweed. Spotted knapweed may possess as many as 200 pink to purple blooms per plant. The mature seed heads resemble Canada thistle, a tight cluster of seeds with a fluffy pappus attached. The pappus helps the seed move with wind, water, animals, and vehicles.

This weed is similar to a biennial, in that the first year of growth there is no flower, just a rosette of five to twelve irregularly lobed hairy leaves. The plant will flower in the second year and continue to flower in the years following. Mature plants may be one to four feet in height, slender or bushy, and will have a deep taproot. It is quite attractive to a variety of pollinators but should not be propagated or preserved in the landscape for this purpose. Many other wildflowers with fewer risks are equivalent food stocks for pollinators.

Spotted knapweed is a prolific seed producer, so if knapweed is not addressed in year two, a population explosion may occur in year three. It gets the name “spotted” because the flower receptacle bracts have dark brown tips. Knapweed is aggressive because it has few natural predators in Ohio. Allelopathic compounds have been isolated from knapweeds, which are chemical substances that can leach from plants and weaken competitors, but the severity of the allelopathic potential remains under investigation. Animals are unfamiliar with it, so grazing as a control is ineffective and it thrives on marginal soils. It can easily out compete weak stands of desirable plants for nutrients.

There are 21 knapweed species and three hybrid knapweeds present in North America. All of them are exotic. They originally arrived with settlers from Europe and Asia in the late-1800s and early 1900s in contaminated hay. Contaminated hay continues to be one of the leading ways seed spreads throughout ecosystems. It is how we suspect it was introduced in our region as well. Spotted knapweed is just one of six especially problematic knapweeds that now colonize over five million acres of rangelands, pastures, crop fields, and waste spaces across the continent. It is also the most prevalent and has been detected in 46 states as of 2015.

Mowing for control is marginally successful. It does help prevent the development of seed, but the plant is able to flower below the height of a mower deck. Biological control using various insects has proven beneficial in western systems but are difficult to secure in the eastern part of the United States. Chemical treatment with readily available broadleaf herbicides and glyphosate for spot treatment has been successful in grass pastures of our region if timed appropriately. Adequately fertilizing pastures can be helpful for increasing the health and competitiveness of desirable plants against the onslaught of this invader.

Some commonly used broadleaf herbicides that are also effective on spotted knapweed include:

The best control tools for spotted knapweed and many other weeds are early detection and early action. Hand pulling and spot spraying young plants that are few and far between can be effective on new invasions. However, heavy infestations will likely take a more creative and lengthy approach to treat including a combination of management tactics.

If you come across something you suspect might be spotted knapweed or another broadleaf weed that is unfamiliar, please contact your county Extension office for assistance with identification and corresponding treatment, especially for those with toxicity concerns for livestock. Examples of other high-profile weeds include: poison hemlock, the nightshades, pokeweed, cress-leaf groundsel, milkweed, hemp dogbane, buttercup, and more. There are some ways that you can streamline the identification process and improve the swiftness of a determination when seeking assistance.

If you bring in a plant sample to an office for identification, bring a whole plant- roots, stems, leaves, flowers, and all. Also, take a photo of the environment it was taken from. When submitting a photograph or video sample take a shot from far away including the surrounding location where the plant was found. Then take shots up close and in focus that capture all sides of the specimen- top side, under side, and side view. Also include an “element of scale”. This is a common item that everyone should have in their home that can be used to compare size (ex: a ruler, a pop can, a business card, etc.).

In pasture systems, I define a weed as a plant that has the potential to harm livestock either by poisoning, suppressing the growth of desirable plants, destroying fence, causing skin irritation or injury, and those that reduce by-product value by contaminating hair and hide.

In all cases, getting a confirmed weed I.D. is critical for appropriate treatment, early detection will minimize damages, and integrating multiple control methods into the treatment plan will yield the best results.

After a slow start, weeds are roaring now

October 20, 2021 — We look for good drying through the day again with temps in the 70s for the most part and excellent evaporation. However, as clouds build, the threat for rain will increase moving into this evening and the overnight…