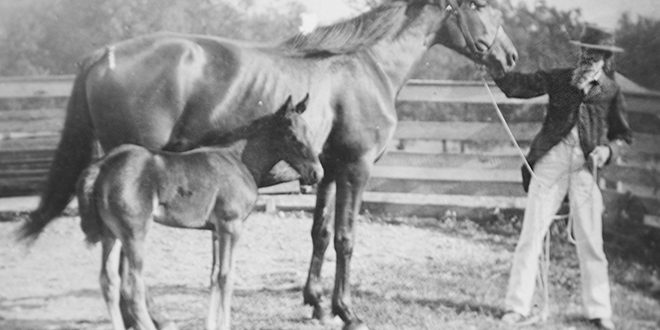 James Clark was known around the nation for his work with trotting horses in the mid- to late 1800s.

A crazy cousin, a family feud over Hereford cattle horns, a couple of Rockefellers, a tragic fire, John Wayne, and a world record all came up in a recent afternoon discussion about the seven generations and 200+ years of rich history on the Clark-Weber farm in Clark County.

Sisters Becky Reed and Jenny Fleming, representing the sixth generation on the farm, were able to share several unique points in the farm history. The story of Grandview Farms and Mohawk Farms got its start, like many other tales in Clark County, with James Foley, who amassed a significant amount of land in the area. He came to Ohio sometime between 1803 and 1805 and served as a Captain in the War of 1812.

“James Foley was a native of Virginia and became one of the early pioneers of Clark County while the Indians were still the principal occupants of the then almost unbroken forest when there was but one store in Springfield, and four or five houses constituted the town. In this county he spent the remainder of his life. Although he possessed of only a limited education, from the meager advantages of schools in those days, yet he possessed great natural talent, and was a very active and powerful man, both physically and intellectually. He became thoroughly known and held the respect and confidence of the people,” from the History of Clark County, Ohio by W. H. Beers and Co., 1881, page 805.

Foley served in the State Legislature for two terms. He also served as the local sheriff. Foley’s daughter Susannah married John David Clark, a descendant of two other pioneer families in the area. On the occasion of their wedding, the couple was gifted around 1,000 acres of prime Clark County land from Foley.

“John D. Clark…has been a man of great activity, and not confined himself to the mere routine of farm labor, but his mind carried him into a more active field, that of an extensive stock dealer. For 30 years he did a large trade, buying through this country and the west as far as Illinois, driving large droves of cattle to Philadelphia and the Eastern markets, often throwing into market from two to three thousand head of cattle in a single year; has also dealt extensively in wool and pork, in all of which he was generally successful, as known by the fact that, in 1870, when he retired from business, he was worth over $200,000, which was mostly made by his own labor, skill and good management, which is perhaps a record of success surpassed by but very few in that day, or even since,” from the History of Clark County, Ohio by W. H. Beers and Co. 1881, page 983.

The couple had four children and their son James was the next generation to occupy the farm. James worked closely with his father, and learned the ways of business, but shifted the focus of the farm to trotting horses. James built a reputation throughout the country for high quality horses.

“James was a character,” Fleming said.

He was able to buy back land from his sisters and expand the acreage of the farm.

“He was a businessman. The Clark family did a lot of political work. James was a Clark County Board of Ag member, served in various township offices and he was township treasurer for 8 years. He made a lot of money with the trotting horses on his Mohawk Stock Farm. He built his own race track on the farm,” Reed said. “At that time the farm butted up against the railroad. People would stop off of the railroad to look at the horses.”

The horses getting attention from train passengers included the first trotting colt James ever owned. Foaled in 1866, this horse known as Mohawk Junior trotted to a world record time of 2:25 in 1872.

“The story we were always told is that Mohawk Junior was down in the bottoms running next to the railroad track. One of the Rockefellers was riding on the passing train and saw the horse. There was train stop on the farm,” Fleming said. “The Rockefellers got off and came to the farm saying they wanted that horse. James sold him the horse for $20,000 in the 1870s.”

At that time, the farm was known for “657 acres of most excellent land in a high state of cultivation, with fine and substantial buildings, with every arrangement for convenience and comfort, and is one of the best grain and stock farms in Clark County,” according to the History of Clark County, Ohio.

James also added land to the operation in Kansas, amid some unusual circumstances. He had a cousin who followed a woman out west where he started a sheep operation. Things did not work out with the woman.

“I guess he was all alone one winter and went a little crazy, so James went out to help and ended up buying all that land in Kansas as well. James also went around buying land owned by widows of Civil War veterans in Kansas. He ended up with 2.5 sections in one area and 3 sections in another area,” Reed said. “James married Emma Morgan. They had two children, but lost one early in life and Emerson was the only descendant. He was born in 1879.”

Emmerson Clark was known to be “one of the most pleasant and affable gentlemen it has been our good fortune to have met with in this county” by the authors of History of Clark County, Ohio.

“Emerson shifted from horses to the cattle business and grew crops, mainly corn to feed the livestock. He phased out of trotting horses after his dad passed away. He married a lady from a nearby family,” Reed said. “He was honorary director of Merchants and Mechanics Federal Savings and Loan — later M&M Bank in Springfield. He served 20 years as bank director and VP of bank from 1935 to 1952. He was happy being in town. He passed away in 1957. Emerson had two daughters, Emma Louise and Mary Kay. When Emerson died the farm was split between the two daughters. Mary Kay had the Mohawk Farm and E. Louise, our grandmother, got the upper portion.”

Louise married Frank Weber, who farmed and served in World War II. Mary Kay married Arthur Sprague, who died young in 1959. They had no children. The daughters of Emerson Clark did not always see eye-to-eye, particularly with regard to Hereford cattle.

“Mary Kay wanted polled Hereford cattle on her part of the farm where they lived in the house James built and Emerson lived in, with all of the horse barns,” Fleming said. “Our grandfather Frank, Louise’s husband, went to the yards and got a horned Hereford bull and some heifers. Our grandmother had a fit! She asked him what he was doing, but she eventually agreed to it — thus the beginning of Grandview Farms Herefords. For 10 years there were Mary Kay’s polled Herefords on one half of the farm and our grandparents’ horned Herefords on the other.”

Another source of controversy between the sisters took place as a result actions taken to address flooding in Springfield. Serious flood damage from the overflowing Buck Creek took place in 1929 and again in the 1950s. In an effort to correct the problem, the Federal Government used eminent domain to take a large chuck of the family farm to create Buck Creek State Park, all of the family land coming from Mary Kay’s portion.

“In 1959 they created Buck Creek State Park to be used as a reservoir and flood plain. They dammed up Buck Creek and made the reservoir on their land,” Fleming said. “They did not get what the land was appraised at. They were among the last landowners to hold out on selling to the government.”

After her land was taken and her husband had passed away, Mary Kay moved back into the house James built to care for her mother.

“That house caught fire in 1966. Mary Kay got out of the house, but her mother was still in the house and she ran back in to save her. She died trying to save her mother,” Reed said. “She was 58 years old when she died.”

Having no children or husband, Mary Kay’s remaining land went to her nieces, Janet and Kathy their herd of horned Herefords. The family bought a noteworthy Hereford bull from John Wayne and, somewhat ironically, also purchased a Hereford bull from the Rockefellers. Frank died when the Reed and Fleming were very young, but they all have fond memories of their grandmother Louise.

“Louise Weber was a music teacher. Frank farmed here. He did row crops and cattle. Louise kept the books and managed the money. She also managed the Kansas farm. The family was then very active with all horned Herefords. They hosted a lot of events here for that including state junior shows and field days,” Reed said. “She always wanted to look nice and drove a Cadillac. She always wanted to present herself as ‘proper.’ She always wore dresses and heels until the 70s when she was finally convinced it was OK to wear pants.”

As a teacher, Louise had famous comedian Johnathan Winters as a student. She claimed that even as a boy, “he was a card.”

Louise was very social and enjoyed playing piano at home.

“They had one of the first televisions in the neighborhood. People would come over and want to see the television. Grandma travelled a lot. They took a trip to Cuba, travelled to Hawaii, Florida and out west a lot, especially to the land in Kansas. They went to Kansas about once a year. I can even remember driving across the Kansas prairie in the caretaker’s Cadillac,” Reed said. “They went to a lot of cattle shows. Louise was very social. Everybody knew Louise. Grandpa was known to be more soft spoken and reserved.”

Frank and Louise Weber had 3 children, all daughters, Janet, Gloria and Kathy. Janet married Bob Quaintance, and they had three daughters, Becky (Reed), Jenny (Fleming) and Liz (Olsen). They lived in Lancaster before moving to the farm and building a new home on the foundation of the house that burned down. They started an orchard and opened a farm market selling a wide variety of produce from the farm, while maintaining row crops and Grandview Herefords on the land as well. The farm market continued until the early 1990s. Janet served as a president of the Ohio CattleWomen’s Association and on the board for National Hereford Women.

Today, Fleming, Reed and Olsen reside on the farm. Some of it is rented for cropland, and Becky, her husband, Jay Reed, and their children, still maintain a 75-head herd, most of which are registered Hereford cattle sold for seedstock. They also run some crosses and sell a fair amount of freezer beef. They have around 200 acres of the farm in pasture and additional acreage for hay production. The family received the East Region Show Bull of the Year Award from the American Hereford Association in 2002 and was inducted into the Ohio Hereford Hall of Fame in 2003. Becky currently serves on the Ohio Beef Council Operating Committee.

Laramie and Codee Reed are currently in college and looking at a future as the seventh generation with cattle on Grandview Farms, and continuing the long and rich bicentennial family legacy on the land.