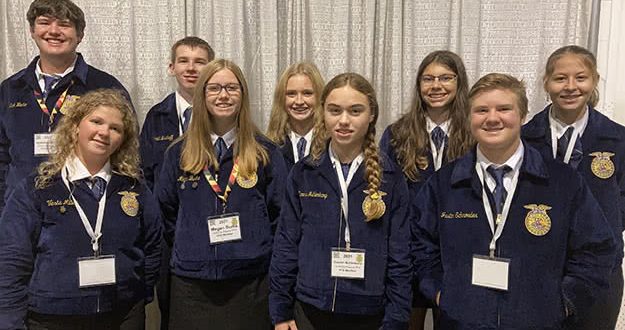 Overall we had a successful week at the National Convention! Students that went were Shelby Navarre,  Summer Muhlenkamp, Mikayln D’Amore, Vesta Miller, Megan Burke, Anna Wright, Nick Wacha, Ronald Bishoff, and Justin Schroeder. We arrived in Indianapolis for the National Convention on Thursday afternoon. After dropping the bags off at the hotel, students were taken to the National Convention. Students were then able to explore the expo center and shopping mall. At the expo center, there were many colleges and businesses that students were able to learn more about. It was a great learning experience for the students because it helped them learn more about their future and what colleges they would potentially want to attend. During the day all students attended the parli pro competition to see what a competition looks like, and prepare the executive team for the same contest. For dinner, students were treated with Harry and Izzy’s, sponsored by the AW FFA Alumni. We were excited to have State President and Anthony Wayne alumni, Jake Zajkowski, join us for dinner. After dinner students went to the third, their first, session of the National Convention at the Lucas Oil Stadium. At the session, the students got to see many other FFA members receive awards in proficiency and agriscience. After the session was over students went to a local monument and got to hear and see a projection of the National Officers saying the FFA Creed. The next day students went to the fourth session and watched Jake Zajkowski receive 1st place in Plant Systems Division 5 of the National Agriscience Fair. After the fourth session students were then allowed the time to shop and roam around the expo center. Students were also able to go to various student leadership workshops. Finally, at the sixth session, we got to watch and cheer for Ronald Bishoff as he received 2nd place in Social Systems Division 3 of the National Agriscience Fair. We are very proud of both Ronald and Jake! On the way, home students reflected on their experience at the National Convention. All students said they had a very memorable and enjoyable National Convention, and can’t wait till next year! Anthony Wayne is a satellite of Penta Career Center.