The Infrastructure & Jobs Investment Act was approved in early November in a bipartisan vote by the House of Representatives, after being passed by the Senate in August. President Joe Biden signed the bill on Nov. 15. The bill had general agricultural support.

The Ohio Soybean Association (OSA) was pleased to see investments in several soy-related areas contained in key parts of the bill, including $110 billion in funding for roads and bridges and $17 billion for ports and waterways. These investments will help update the multimodal transportation network on which the soybean industry relies. Importantly, the bill did not increase the tax burden on farmers, a key point of advocacy for OSA as Congress has considered funding bills over the past few months.

“We recognize that this is not a perfect bill but we also acknowledge that the improvements to infrastructure this bill will bring are vital for our industry to remain globally competitive,” said Ryan Rhoades, OSA president and Marion County soybean farmer. “An investment in infrastructure on this scale will ensure our industry can thrive for future generations.”

Other farm-related provisions in the bill include:

Livestock haulers too were pleased with a provision in the legislation expanding the miles agricultural truckers can drive without the restrictions of the federal Hours of Service (HOS) rule. The HOS rule limits commercial truckers to 11 hours of driving time and 14 consecutive hours of on-duty time in any 24-hour period. Drivers hauling livestock already were exempt from the HOS rule for the first 150 miles. Now they also are exempt for the final 150 miles to their destination. 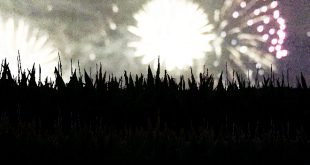