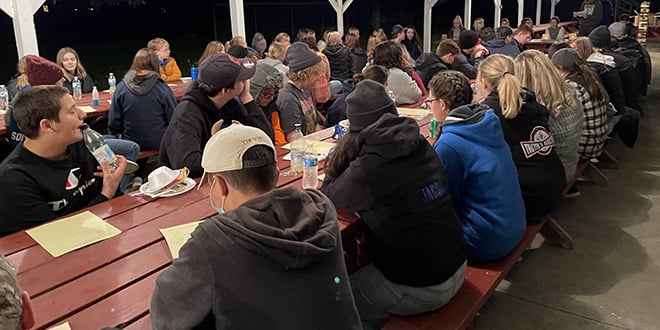 On October 23, the members of the Northwestern FFA Chapter gathered at The New Pittsburg Park for the annual Fall FFA meeting. To kick off the meeting, members were able to participate in some recreational activities. This included kick ball, life size janga, card games, corn hole, and dancing. Following recreation members were able to enjoy a meal with their classmates. Each class was assigned a certain food to bring. Then the meeting began. The meeting was called to order by President Jadeyn Berry. Then, the officers performed opening ceremonies and minutes of the previous meeting were read by the Secretary Ava Stoller.  Treasurer’s Report was given by Zoey Dudte and the Reporter’s Report was given by Hanna Wilson. Kade Tegtmeier moved to accept all officer reports. Members then broke out into their assigned committees. The commitees are; Ag in the Classroom, Earnings and Savings, Community Service, Public Relations, Skills/CDE, Leadership, Recreation, Middle School Engagement, and High School Engagement. Each committee was led by an officer and members were able to brainstorm ideas for the chapter and participate in activities. One member from each committee then shared their ideas with the Chapter. Officers then reported on events that have taken place so far this year. These events were T-shirt orders, Officer Retreat, Wayne County/Ashland County Fair, Fair Recycling, Soil Judging, Feed a Farmer, and Fun Fridays. Officers shared a brief description of all of these events and informed the chapter of events going on. Members then discussed and voted on upcoming events. These itemes included paying chapter dues, participating in fruit sales, and participating in bell ringing. The following CDE’s were then voted on – Parliamentary Procedure, Job Interview, Food Science, Ag Sales, Public Speaking, and Wildlife. Following the discussions and voting of these items, Hanna Wilson adjourned the meeting and Kara McKay seconded it. 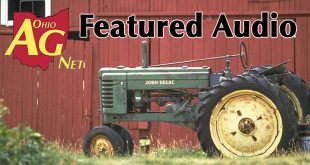