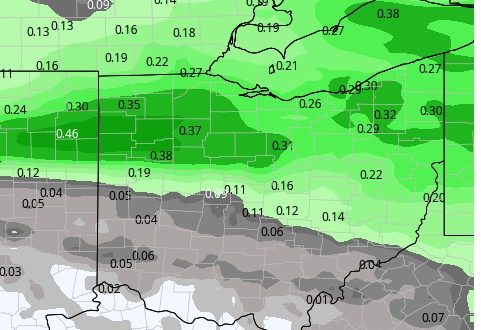 Much colder air in play today over Ohio, but we should be precipitation free in most areas. Temps will be below normal. Tomorrow temps start to moderate some, which is a little faster than we were seeing a couple of days ago. However, that faster warming also brings a faster arrival of our next disturbance across the state. We expect clouds to thicken tomorrow afternoon, especially in the NW quadrant of the state, and scattered rain showers will arrive late afternoon and evening. Moisture continues to swing through the state tomorrow night and into early Sunday bringing a few hundredths to half an inch to areas north of I-70. Behind that we are see a lot of clouds and cold air for the balance of Sunday with strong NW winds and some lake effect holding on over far northern counties. The map below shows moisture potential for tomorrow afternoon through Sunday.

Monday will be mostly dry, but still cold. NW winds bring some lake effect clouds into OH, particularly north central and eastern pars of the state overnight Monday night into early Tuesday. However we should stay precipitation free in that period and for Tuesday through Thursday as well. Temps will try to moderate for those days, but we never really get super mild.

Next Thursday night and Friday morning, a minor wave moves over lower MI and Lake Erie. This can bring some scattered rain showers in to northern tier counties, mostly north of US6 and US 20. Farther south we see nothing at this time. Rain totals will be a few hundredths to .25″. Next weekend is now looking much more active with a significant rain and snow maker poised to move through Ohio. Liquid equivalent totals for Saturday the 4th and Sunday the 5th will be half to 1″, but we can definitely see some wet snow in there, especially in NW and western parts of the state. This system continues morph and evolve, so stay tuned for updates as we move through next week. 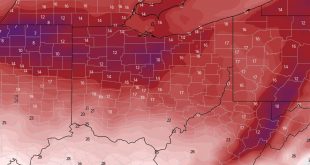 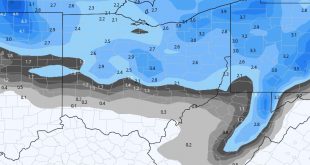 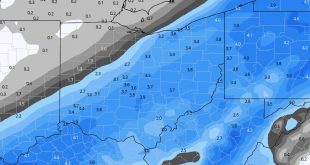