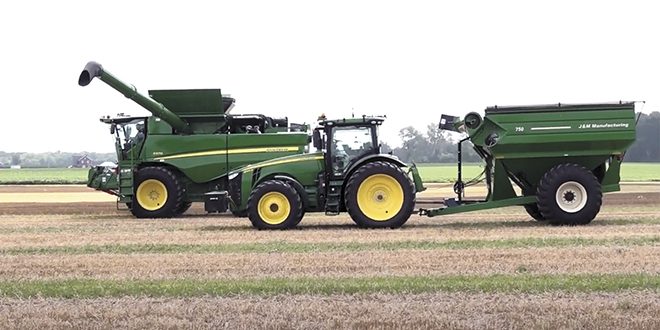 Notice the empty tractor cab in this photo taken during a demonstration of the Raven OMNiDRIVE autonomous grain cart system.

The advent of automation

This fall, Dale Minyo was in the cab of a tractor pulling a grain cart, but he was not driving. No one was.

Minyo was at a Raven OMNiDRIVE autonomous grain cart system field demonstration outside of Minster with Precision Agri Services, Inc. Paul Bruns, sales specialist for Raven, gave an overview of the scenario leading up to the development of the system.

“Raven acquired two companies back in 2019 that started to build the pathway toward autonomy. The acquisitions of Smart Ag and DOT Technology Corporation have started to pave the way to bridge that labor gap and move faster into autonomy. Realistically what we are trying to do is solve the labor constraints we’ve got. It doesn’t matter where I have been throughout the country, good help is getting harder and harder all the time to find on the farm. We are trying to find the best way to reallocate the resources and people we have to let technology handle some of the more mundane tasks and let the individual do a more highly valued skill that may take some customization,” Bruns said. “We actually have the luxury of being able to bring in the driverless technology we’re seeing coming out of the automotive industry as well as through our cellular networks and high speed internet opportunities there to get that data shared back and forth.”

Of course, safety has been a priority in the development of the system.

“We really focus on safety first with all of this. We are not running autonomously on public roads with this. This is confined within the producer’s land and control to make sure it is supervised and always safe,” Bruns said. “We have to start with a field boundary map. The system can’t run outside of that field boundary. We have to have a coverage map to say this is an area that is already harvested and safe to drive in. The system has automatically determined its own path to match up with the combine and sync up with the combine on the go.”

There is more work for the combine operator with this system.

“The harvester operator can drop a push pin on a map to say, ‘Here is the unload point’ or ‘Here is where I want the tractor to wait for me’ so he can unload on the go,” Bruns said. “He hits a couple of buttons and it determines the path to get there. The operator still has the ability to accept it or modify it with adding a midpoint to the path.”

Beyond grain cart operation, Bruns thinks the next step for automation could be tillage.

“The biggest opportunity we see and one of the easiest areas we see to move into is in tillage practices,” he said. “The planter and harvester are going to be some of the last places for this technology. That is part of the joy and pride of being a producer — planting and harvesting.”

The automated grain cart operation is impressive and attention grabbing, but there are more subtle ways automation is — and will be — changing agriculture in the near future, said John Fulton, a professor in Ohio State University’s Department of Food, Agricultural and Biological Engineering.

“We continue to see more automation being built into current machinery — harvesting, tractors, even sprayers. We constantly see companies taking more responsibilities out of the operator’s hands and automating machine functions. We are starting to see more artificial intelligence embedded into some of the machinery as well. That does not get us into the realm of a fully autonomous robotic situation, but availability is coming quickly,” Fulton said. “The Raven OMNiDRIVE converts the tractor and grain cart to fully autonomous within the field is commercially available in Ohio. That is here today. The other things on the autonomous front that are here today are drones. You can pre-program the drones to scout and now we are talking about spraying too. Those are operating on some level of being fully autonomous now. Those are some examples we are seeing some farmers taking advantage of here in Ohio.”

In terms of return on investment (ROI) of automation on the farm, there is still some debate.

“We are still working through ROI. On the grain cart side, with some of the labor shortages we are seeing across the U.S. — and we are feeling that pain here in Ohio too — there is an opportunity with this technology,” Fulton said. “You are going to pay around $50,000 for that grain cart technology, which can represent a person’s salary for a year salary for a year, but it does give you an option in some operations that are struggling to find help. You could maybe think about capitalizing that over a handful of years and it probably starts to pay for itself if you are struggling to find good employees employees. We are seeing more companies with automated turning. With a fairly nominal additional cost, I can be planting and it will actually automate picking up the planter at the ends, turning and then lowering it back down, hands-free. I think we’ll start seeing more of that being available as we move toward fully autonomous.”

Early on with full automation technology, Fulton sees more potential for farmers hiring services using automation rather than a farm investing in the technology.

“I don’t think we are going to see farmers investing in autonomous technology at least at the onset. They may be purchasing these services being offered. There is a company called Sabanto out of Illinois and their emphasis is robotic planting and they even talk about tillage. They’ll come plant your soybeans for you as a service,” Fulton said. “I don’t think we’ll see many farmers investing in spray drones or scouting drones. I think we’ll see more consultants and service providers having these technologies in-house and farmers paying for the services. If I have some weed escapes in soybeans I think for maybe $300 someone could come spray that with a drone and cover the small percentage of acres that require spraying. That would make more sense than putting a ground rig in and paying someone to run that machine. Some of that may start making more sense to some growers and I think we’ll see more service oriented autonomous solutions coming to the farm.”

“I think in the future we’ll see a lot smaller equipment, most likely small enough that it can be loaded on a gooseneck trailer for moveability. In the next 3 to 5 years I think we’ll see that here in the state of Ohio and farmers will probably start showing interest in these types of autonomous technologies,” he said. “Today, 45-foot drapers are available in the state of Ohio and I still think we are going to see Class 10 combines come on board and larger growers taking advantage of those and their capacity. We are still going to see things like bigger headers. We are not quite to the end of the growth of the larger equipment yet, especially on the harvesting side, but I do think as we look forward, it will be a different model with smaller, automated equipment, even automated in terms of refueling and refilling.”

As farmers make decisions about investing in technology moving forward, Fulton advises that they take a careful look at the quickly changing technology and the useful life of the investment for the farm.

“You have to think about the technology and how long it is going to last before there is something new out there. Cell phones are one example people use daily. Most of us have a smart phone but it has around a 2-year shelf life before you get a new one,” Fulton said. “How is a farmer going to buy autonomous solutions that may only limited life before there is something more advanced and you need to upgrade? How do farmers plan to keep up with the technology advances? That is where I see some of these services coming in. Move that investment off to someone who provides it as a service, versus investing in a piece of machinery that may be on the farm for many years.”

The advent of automation on the farm may be both exciting and unsettling for some. Minyo, for example, was not so sure he enjoyed riding in a tractor completely out of his control. But that disconcerting lack of control in the cab, may very well translate into better control for farm operators over challenges with labor, limited windows for field operations and human error moving forward.