Factors behind production gains in Brazil

By Guil Signorini, Department of Horticulture and Crop Science, The Ohio State University

Last month this column featured an article about souring fertilizer and chemical costs faced by Brazilian farmers as the 2020/2021 season unfolds. The latest developments show that the Southern farmers have not changed planting and growing plans due to these challenges. On the contrary, projections from CONAB (Federal Agency of Agricultural Supply) indicate that grain growers intensified production. Soybean production is expected to reach 4.9 billion bushels, a 7% increase over the last season, and the highest production mark ever registered. Projections for the corn crop are just as significant. Estimations indicate that the country will produce 4.6 billion bushels, a vital recovery from last season’s drop in production due to drought.

Nevertheless, what catches our curiosity is how Brazilian farmers have managed to improve production projections considering the pandemic and the severe pressure from high ag input costs. What can we learn from our fellow farmers? What marketing factors are favoring production expansion?

One important factor is the likely price stability for both commodities until May 2022, when most growers should be close to the season wrap-up. Ipea (Institute for Applied Economic Research) reported in December that international prices are expected to remain stable or experience marginal increments. Future prices from CME Chicago corroborate with Ipea. Soybean contracts for May 2022 were settled at $12.73 per bushel, and corn contracts were traded at $5.86 per bushel on Dec. 6, slightly higher than current prices in Chicago.

Two other factors deserve attention: the adoption of sustainable agricultural practices and the use of innovative financial tools to fund the production. On the agricultural practices front, no-tillage, use of beneficial rhizobacteria, and crop-livestock-forest integration systems are examples of practices listed in a recent report from MAPA (Brazil’s Ministry of Agriculture) to explain the findings reported in the USDA International Agricultural Productivity document. In the latter document, USDA estimates a Total Factor Productivity (TFP) index. The TFP index reflects the overall rate of technical and efficiency change in production over time. Computations return positive estimates for the index when total agricultural output grows faster than the sum of inputs utilized. Brazil’s index figures above the world’s average with a 1.7% annual growth rate in the last years of analysis (2015-2019). The world’s average is 1.2%, and the U.S. index holds a yearly growth rate of 0.04%. Brazil has been in many ways a reference in sustainability practices applied to corn and soybean crops. As a result, farmers experience yield gains, reduce reliance on conventional inputs or practices, and help sustain a healthy growth rate of national production.

The third overall factor sustaining production growth in Brazil is the development of innovative financial instruments to borrow operating capital. These instruments were devised out of farmers’ necessity instead of preference. The operating costs of a representative corn and soybean farm in Brazil are considerably higher than those of a Midwest farm. Our estimations suggest that one acre of soybeans grown in Brazil requires five times the operating costs that an average Midwest farm requires. Similarly, the operations of one acre of corn in Brazil cost twice as much as the operations of one acre of corn in a typical Ohio farm. Because the cost of establishing a soybean or corn crop is budget constraining for most growers in Brazil, several financial instruments were devised and continue to evolve to ease the constraint. Eventual challenges associated with spikes in ag-input prices can be managed using the available financial tools. (As long as grain prices at harvest lead to a positive bottom-line result).

We want to call attention to two private financing instruments commonly used in Brazil: the CPR (Rural Product Exchange Title) and the CRA (Certificate of agribusiness receivables). Together these instruments raised $5.1 billion in 2019. Farmers may also access working capital at reduced interest rates through season plans (Plano Safra, in Portuguese) put together by the federal government every season. In 2019 the government made approximately $43 billion available to farmers in need of capital to cover establishment costs, including seed, fertilizer, and chemicals.

A quick discussion about the two private funding instruments is in order. The CPR refers to an agreement between a farmer and a financial institution. The agreement is frequently signed a couple of months before planting, and the expected crop is used as the guarantee. Farmers may choose to use the crop to liquidate the title at the end of the season. The CRA is a type of income security issued by a non-financial institution, often a multinational ag-input firm or a commodity trader. The security is then transacted with a financial institution that agrees on anticipating capital to the firm or trader. In possession of working capital, the ag-input firm or trader signs agreements with growers in exchange for the money.

This latter instrument has gained popularity in Brazil for two key reasons. First, farmers show preferences for borrowing capital from trading partners instead of banks. Second, ag-input firms and traders are in a position that allows scale gains before approaching a financial institution for the working capital. In that sense, they tend to obtain the capital at reduced interest rates, which are passed to growers with little to no additional charges. Ag input firms and traders are primarily interested in selling inputs or originating grain rather than profit via financial transactions.

The point to be made is that Brazilian grain growers count on two resilience factors. The first derives from technical decisions at the farm field. Sustainable practices have paid off as they tend to reduce reliance on conventional ag inputs, favor nutrient cycling, and enhance tolerance to abiotic stresses such as droughts. The second factor refers to financial tools available to help farmers cope with expensive operating costs. From the farm financial management perspective, eventual price increases in fertilizers and chemicals can be managed with appropriate financial instruments, especially when the commodities show signs of stable prices at harvest. Other than that, Brazilian farmers must work their fields and hope for the projections to hold and for abiotic stresses to be easy on the crops. The bottom line shall be safe then. 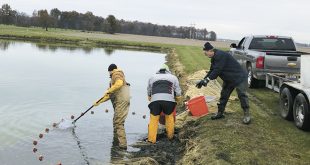 By Guil Signorini, Department of Horticulture and Crop Science, The Ohio State University Between Nov. …