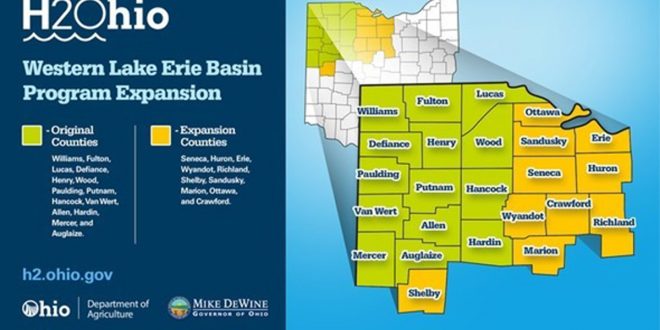 H2Ohio is expanding beyond the Lake Erie Watershed.

Late in 2021, Ohio Governor Mike DeWine and Ohio Department of Natural Resources Director Mary Mertz announced that $5 million in H2Ohio grant funding will be directed to 13 wetland projects in 11 counties to help improve water quality in the Ohio River Basin.

“We are excited to continue the expansion of H2Ohio’s work into the Ohio River Basin and to take the next big step toward naturally improving water quality across Ohio,” DeWine said. “Water issues expand beyond Lake Erie, so by focusing this funding farther south, we can address water challenges on a bigger scale and help ensure that people throughout the state can experience the benefits of these wetlands.”

DeWine announced the launch of the Ohio River Basin H2Ohio Wetland Grant Program in July. The program provides up to $500,000 for wetland projects that address nutrient loading and contribute to water quality improvement in the Ohio River and its tributaries.

“We’ve seen a ton of success in northwest Ohio, and I am thrilled to see the H2Ohio initiative expand into the Ohio River Basin,” said Mary Mertz, ODNR Director. “We are really excited to add to the growing list of H2Ohio wetlands and share the benefits of these projects with everyone across the state.”

Wetlands help improve water quality by trapping, filtering, and removing excess pollutants and nutrients, like phosphorus, from the water before they flow into waterways and contribute to harmful algal blooms. Right now, there are more than 70 H2Ohio wetland projects underway.

The Ohio River Basin H2Ohio Wetland Grant Program is funded as part of Ohio’s 2022-2023 operating budget which was passed by the Ohio General Assembly and signed by Governor DeWine in 2021.

These, and additional steps in the future, will build upon the efforts started in the Western Lake Erie Basin Watershed in northwest Ohio. Bob Short farms in Williams County and is the immediate past president of the Ohio Federation of Soil and Water Conservation Districts. He has seen first-hand the rollout of H2Ohio both in his own community and from the state level.

“I was president of the Federation when the governor really rolled out the program. There was a lot of fanfare. The legislature has been super supportive of the program and they have infused a lot of money into trying to clean up Lake Erie. I think it is having an impact from the data I have seen,” Short said. “Williams County had a very good signup initially and we have had another good signup this year, so we have had continuous additional acres added. We are seeing a lot more cover crops, no-till and nutrient management plans. You have to start out with setting a plan, which is always good practice in anything you do. Now we have some outstanding producers in our county trying strip-till and subsurface placement of phosphorus. It has been a good program for Williams County.”

At the local level, there were some initial concerns about implementing the massive effort.

“Initially we all sat back and said, ‘Wow, how in the world are we going to do this?’ But they have allowed us to add staff and the Ohio Department of Agriculture hired H2Ohio coordinators to work with producers and get them to participate in the five areas of the state,” Short said. “There are water quality issues across the state with algae blooms and runoff. No-till practices really do a lot to improve water quality. I have seen fields in continuous no-till with cover crops for 10 to 15 years and the tile outlets after a big rain are running clear. Those practices filter the sediment of the water and let it infiltrate into the soil. We have to do what we can statewide to hold those nutrients in place so the crops can use them. If we can get these practices in place so nutrients stay where we put them so the plants can take them up, that is a big win.”

As H2Ohio continues to expand, Kirk Hines, chief of the Ohio Department of Agriculture Division of Soil and Water Conservation, has expectations of broader success around the state. That success requires a combination of investment at the state level and interest/willingness in conservation at the farm level.

“H2Ohio has been going phenomenal when you think about where we started 4 years ago and where we are now. It is tremendous. We are looking at $60 million a year now from the legislature and administration, but really what was most important was how agriculture responded. We know there is a need for conservation but there is also a desire to do it and we’re excited about that,” Hines said. “We were at the beginning of COVID and we had planned 8 meetings and were expecting about 100 people at each meeting. We literally had 300 or 400 people show up at each one. The numbers have continued to stay really solid. As we moved out this year and expanded into 10 more counties, we were curious what we would see. Our numbers have really stayed pretty consistent.”

The local implementation has also been vital.

“The Soil and Water districts have been tremendous. Typically they are working on federal programs and implementing them. Then all of the sudden on top of that workload some counties had maybe 200 additional contracts. It has been a learning curve. Thankfully the administration and legislature have provided some dollars and we have added staff in the northwest counties. They have really picked up that workload well and embraced that,” Hines said. “We are looking to see a 40% reduction in P getting into the lake, but what we really want to focus on in agriculture is what producers can do at the edge of their fields to see some success. A few things that have amazed me are seeing cover crops put on when corn is knee high or seeing people putting all of their phosphorus on with liquid fertilizer. We always say that if we let the producers figure it out and tell them what we want as the end result, they seem to do that and that is what we’re seeing. We are seeing that H2Ohio has been allowing some people to get the equipment in place and over years they think they’ll be able to pay for it. Subsurface placement is something we are continuing to learn about. Technology wise are there other things we can look at too. People are looking more at the forms of the fertilizer and the time of year when it is placed. There are other options but it does take time.

“Overall we are hearing very positive comments. We are seeing conservation placed. With this wet year in the northwest they would not have gotten some of those cover crops on, but they could aerial seed those because the dollars were out there. Landlords out there are liking how cover crops look and producers are seeing the positives coming all the way through.”

So far it appears the initial interest at the farm level remains strong as H2Ohio moves into new counties.

“At first we were really uncertain where this would go. We are signing up now in 10 additional counties. We were about at 40% of the cropland acres in the Maumee in the first 14 counties in this program. We didn’t know what would happen in these next counties but we are seeing 38% or 39% so we are seeing enrollment to be pretty similar,” Hines said. “That gets us to about a quarter of the state. We are hopeful we can continue to expand out and look at this program across the state. We do have some different land uses in other areas so there will be challenges, but this is an Ohio program, not just a northwest Ohio program.”